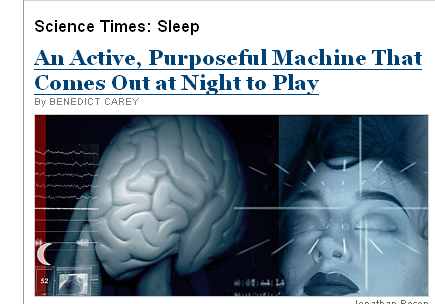 There I go again, alluding to cultural cliches in my post title, but I could not help myself. I get positively giddy when I see nightmares and surrealism going mainstream in the news. Of course, surrealism has been mainstream since the 30’s, and you could argue that it forms the aesthetic bedrock of much of the advertising industry. Well, anyway, the NYTimes Science section is featuring dreams and bad dreams – most dreams are bad, it seems – in today’s paper. 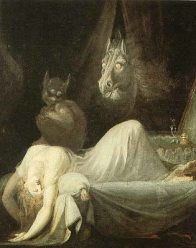 And speaking of bad dreams, a mare is a horse, and a nightmare, well, Henry Fuseli showed us what it all means with his famous pictures, one of the best known shown here.

And this strange, bloody eye, right from the page of the NYTimes! So common in horror shows these days – I just saw it last night while I peeked at my son’s favorite TV sci-fi melodrama, Heroes. To the right, we see its ancestor in that opening sequence from “Un Chien Andalou,” (An Andalusian Dog) the landmark of cinema and surrealism by Dali and Bunuel – a woman gets her eye sliced open as a thin cloud passes before a full moon…and the dreams begin. Rotting donkeys on pianos, hands stuck in doors with ants, lots of ants, sex, death, music…the usual stuff.

Not as well known to the public, because it doesn’t make for shocking juxtapositions in pop culture, is the surrealist preoccupation with l’amour fou, deranged love. This image from “L’Age D’Or” (The Golden Age) shows one of the more fetishistic aspects of this trend. 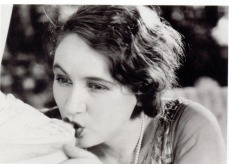 And while we are on the subject of images in the media, here’s one from todays online NYTimes. A house going up in smoke, combining with oxygen, as Mr. Rosewater (God bless him) would have it, in southern California. To me, it has an apocalyptic cast, reminding me of the final scene from that noir pulp classic, “Kiss Me Deadly,” when the scoundrels open up The Box and are illuminated with deadly radiation. End of the World, anyone?

This entry was posted on Tuesday, October 23rd, 2007 at 1:43 pm and is filed under Uncategorized. You can follow any responses to this entry through the RSS 2.0 feed. You can leave a response, or trackback from your own site.

4 Responses to Nightmare on Main Street