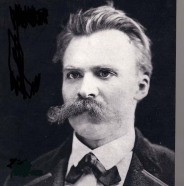 [After reading this, be sure to visit my later post,Nietzsche Reconsidered. http://wp.me/p3LmG-2qt%5D

Time to put on my crank-curmudgeon hat. I must “rail against” Friederich Nietzsche (as Flaubert would have said.) Another thinker – yes, I’ll grant him that description – who is vastly overrated. Or at least, not worth the adulation and seriousness with which he is treated, I think.

I’m not going to lay at his feet the blame for the crimes of the Third Reich, or the disgusting propagandizing carried out for the Nazis by his sister, whom he despised, I believe. It all happened after he was long dead! No, I won’t even attack him for being a pitiless scourge of the humanitarians, a cynic, or a war monger. Nope, Fred was a whiner.

Look, I know that personal details of biography are not supposed to be the substance of intellectual critiques, but the fact is, a lot of intellectuals develop their complex systems to work out their personal problems. (Wittgenstein was another.) I suspect that for many, their intellectual systems compensate them in some way for something they feel they lack, but that’s my speculation. Some people compensate with serial murder, pedaphilia, adultery, greed, or generally unpleasant behavior: intellectuals do it with ideas.

Nietzsche, the son of a protestant pastor -That alone should give you a clue! Think of the literary figures, brilliant but a wee bit unbalanced that have come from that backgroud! (Samuel Butler comes to mind.) Why, I personally know a few such people myself, including one that was a radical underground figure of the 60s. Add to this the fact that he was extremely shy, sexually innocent, socially awkward, and that his romantic/sexual experiences are said by some to have been limited to one encounter in a brothel, from which, incidentally, he contracted the syphilis that killed him years later. Of course, he gradually went mad, and died in an insane asylum.

The man was a romantic, a dreamer, a scholar of ancient languages who felt out of place in the sordid hustle of industrial Europe. Nothing unusual there. So, he develops a philosophy that is really his poetical statement of his revulsion towards 19th century culture. (“They vomit their bile and call it a newspaper.”) His work is a song of yearning for a time long past, a time that probably never existed. The dream of a classics scholar, poring over Greek literature, enthralled by the heroic aesthetics of ancient civilization. (Sort of like the shrink in the play, Equus.) And what does he see around him? Commerce! So, he whines, and complains, and insults, and rants and raves, and dreams up the “superman” who is above all that. As he would be if he were not such a nebbish. Can you doubt that he really sees himself as Zarathustra: (“Lo, I am like a bee who hath gathered too much honey, and I need hands outstretched to take it” [his wisdom, that is])? That’s what his philosophy amounts to.

Taking the nectar of thought and making one’s honey, that is his nature.  Poor Nietzsche!  He is just a flower who takes himself for a bee.

Sure, I agree, his tirades are a “useful corrective” (as has been pointed out to me) to the dogmatic materialism and hypocrisy of 19th century bourgeois culture. Okay. And he could be pretty funny with his nasty, rapier thrusts, e.g., “The last Christian died on the cross.” He was right about the relativistic nature of all morals, but is that a great achievement – has nobody else mined that intellectual vein? His aesthetic sense was sharp, but that’s not why he’s remembered. All in all, a brilliant man, but a “Great Thinker?”

I recall my English class in high school when the teacher asked us who were the greatest thinkers of the 19th century – I believe he was looking for Darwin, Marx as the answers. I, enthused about Zarathustra and what I thought it pointed to in my future, ventured Nietzsche. His dry remark: “Well, there are thinkers and there are thinkers.”

This entry was posted on Friday, January 11th, 2008 at 5:15 pm and is filed under Uncategorized. You can follow any responses to this entry through the RSS 2.0 feed. You can leave a response, or trackback from your own site.

37 Responses to Nietzsche, the Whiner