Give my love to the sunrise…

Elsa’s farewell to Michael – she looks glamorous even when she seems to be really dying.  How many times do you see that in an old ‘B’ movie?  This is after the famous shoot out scene in the house of mirrors, a location that reflects (no pun) the nature of Michael’s befuddled nature throughout the film.  He knows he’s been taken for a chump.  A wonderful femme fatale noir flick, and the local scenes in Frisco’s Chinatown are another entertaining piece of it.  Not to mention watching Hayworth running through the market streets in high heels and furs and speaking Chinese!  She is the Lady from Shanghai, after all.

In noir, everything is foreshadowed, pre-ordained, determined.  Michael rescues Elsa from some clumsy thugs who jump her while she’s riding in the horse drawn carriage  in which he first saw and spoke to her in Central Park.  Later, saying goodbye after declining to work on her yacht because he suddenly discovers that she’s a married woman…

…he hands her the gun he found …”Would it be this you’re lookin’ for?  You were smart to carry a gun, traveling alone in the park.  But if you knew you had the gun in your bag, why through away the bag?”

“I meant for you to find it…I don’t know how to shoot.” 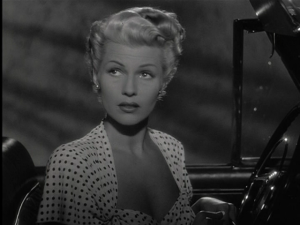 It’s all summed up in Michael’s monologue on sharks, inspired my Melville?  Inspiration for Spielberg’s Quint’s tale of the Indianapolis?

And of course, pull the trigger they do in the fabulous and famous shootout in the crazy mirror room of the funhouse.

This entry was posted on Sunday, August 3rd, 2008 at 8:29 pm and is filed under Uncategorized. You can follow any responses to this entry through the RSS 2.0 feed. You can leave a response, or trackback from your own site.