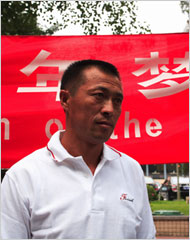 As the television world watches the Olympics in Beijing, the Party is ensuring that certain things will not be seen.  In order to stage a protest of any sort, especially during the festivities, you must get a permit and only exercise your right to speech in selected zones.  (Sounds a bit like the Republican convention in NYC, 2004, eh?)  According to this article in the NYTimes, quite a few of those who sign up for the right to voice their grievances publicly are ending up disappearing into the maw of the Chinese Communist Party security apparatus.  It reminds me of that grim old joke about Stalin and the Soviet constitution that was packed with liberal human rights.  They only published it to see who would sign on, so that then they could be dealt with.

The fellow shown here is a veteran protester, profiled briefly in the article:

Despite what seem to be the perils of applying for a permit, scores of people continue to flock to the capital seeking an opportunity to publicize their grievances. Gao Chuancai, 45, a farmer from Heilongjiang Province, evaded a police cordon in his hometown and arrived in Beijing with a handwritten poster describing a litany of abuses by local officials.

Mr. Gao said in an interview that he had no delusions about his prospects. Over the years, he said, he has been jailed a dozen times and beaten repeatedly for trying to publicize corruption in Xingyi, a village just outside Harbin in China’s northeast. Security officials from Harbin had in the past even tracked him down in Beijing and stopped him from petitioning higher authorities in the capital, he said.

Early this month, after he learned of the Olympic protest zones on television, he mailed in an application to Beijing.

On Wednesday, he worked up the nerve to visit the application office. “Whatever happens, happens. I don’t care if I die,” he said as his taxi pulled up to the building.

Just what makes a person act this way?  Some sort of glorious stubborness that might, under most circumstances, make him a rather unpleasant person?  Surely, the authorities are asking themselves the same question:  “Why won’t he just shut up!!”  Philip Pan’s engrossing new book, Out of Mao’s Shadow: The Struggle for the Soul of a New China, tries to answer just this question.  He profiles several men and woman, inspiring, brave people with   tremendous grit, who won’t buckle under to the the Chinese state.  He also describes others who are cynical, rapacious, brutal, and totally unprincipled, and he sees it as an open question as to which group will carry the day in China, ruled as it is by an entrenched, corrupt, kleptocracy.  (Communist ideology dropped by the wayside long ago.)

At the reception area, a pair of officers questioned him about the nature of his protest and asked him to fill out a lengthy form that included the names and numbers of the officials who had wronged him. Mr. Gao was reluctant, but he complied.

After an hour, they smiled and told him to return in five days. As he walked out the door, he overheard one of the officers on the phone. He was calling the police station in Harbin.

I wish him luck.

This entry was posted on Saturday, August 16th, 2008 at 12:10 am and is filed under Uncategorized. You can follow any responses to this entry through the RSS 2.0 feed. You can leave a response, or trackback from your own site.