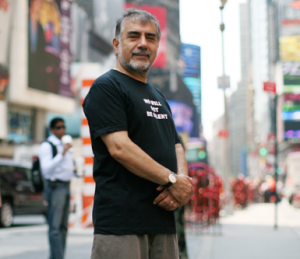 Once again (see this post) I return to the story of mass arrests in NYC – peaceful protesters, or people not even demonstrating, hauled into the precinct station, some of whom were held for days.  Only two people tried – acquitted of course – in proceedings that surely must have been absurd to witness given the evidence available that totally undermined all of NYPD’s claims. Everyone else released, no charges.  Why were they arrested?  HYSTERIA!

The New York Times has been following, and sometimes editorializing about the process by which the lawsuits against the city are being settled.  Today, it describes how at great cost in legal fees and staff time, after much stalling and stonewalling, the city is paying out millions of dollars to settle claims related to its violation of civil rights.  Of course, the NYPD admits no wrong doing – state organs never do.

The article quotes the fellow shown in the picture above:

Then they started arresting us, one by one. At that point, I got emotional — I could not believe in my country, in my city, I could get arrested for doing absolutely nothing and standing on the sidewalk,” Mr. Shirazi added.

Are there any lessons from the day? The Law Department said the $2 million payout did not mean the police had done anything wrong. “This settlement was reached without any admission of liability on behalf of the city and the individual defendants,” said Ms. Halatyn, the city lawyer.

The Police Department did not respond to a request for comment on the settlement.

Mr. Shirazi said that as he was being handcuffed for the first time in his life, he told the officer that the plastic cuffs were squeezing him. “He said, ‘You should have thought about that before you came out this morning.’ It was like a dagger in my heart, that a police officer of my city would come up with anything like that.”

In what does patriotism and love of country consist?  Following orders motivated by unthinking fear or hallowing and practicing the ideas that gave it rise in the first place?

This entry was posted on Thursday, August 21st, 2008 at 2:36 am and is filed under Uncategorized. You can follow any responses to this entry through the RSS 2.0 feed. You can leave a response, or trackback from your own site.

5 Responses to “A dagger at my heart…”