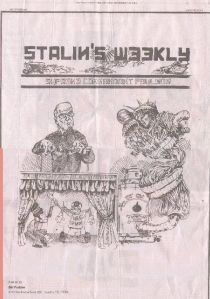 Stalin is much with us these days.  At left, a crude cartoon published in yesterday’s NYTimes lampooning the proposed bailout that was voted down later that day.  It was paid for by someone in Texas who seems to own a venture capital business.  Today, he ran another one that was a crude parody of the famous Iwo Jima flag raising, with Bush, Berneke, and Paulson raising the flag of communism on American soil.

Also in today’s paper, an article about a fellow in Georgia who makes a tidy living by impersonating Joe himself.

And on my home front, my latest acquisition.  From Regency  political cartoons and satires to deadly serious state propaganda.  A limited edition printing of the report on the first Five Year Plan of the USSR, completed in FOUR years, under the glorious leadership of Uncle Joe.  With a little help from slave labor.

Dedication page – meant to be given to a loyal Party member

Lenin is still No. 1

When I look through these pages, I feel a tremendous sadness.  The forced collectivization was on.  The mass murder of the kulaks was in full swing.  The Ukrainian famine had wrought its horror.  The Gulag was growing apace.  The Great Purge was but three years off, to be followed by the cataclysm of the Nazi invasion.  All under Stalin’s watch.  No hint of that in these stirring pages…

A colleague of mine is Russian.  She smells the paper and the ink, and is transported back to her grandfather’s library…

This entry was posted on Wednesday, October 1st, 2008 at 12:44 pm and is filed under Uncategorized. You can follow any responses to this entry through the RSS 2.0 feed. You can leave a response, or trackback from your own site.