I found out about Fritz Lang’s film, Scarlet Street when I wrote a post on sounds in old films:  audio is said to be an important element in the story, and in fact it is, but not until the last third of the movie.  That’s the way this one is:  for the first hour, I thought it was a little slow, a bit corny even, and then in the last 30 minutes there is a whirlwind of plot switches and weird events that are very clever.  The more I think about it now, the more I like this movie!

One of my favorite aspects of the film is that it hinges on ideas and cliches about art, and makes very funny and ironic use of them.  The old saw is “I don’t know much about art, but I know what I like-” sniffed at by congnescenti, but actually as good a basis as any for getting started in the art world.  The pimp and the prostitute in the image above don’t know anything about art, and they don’t even like it!  Booze and sex will be enough for them.

Chris Cross (Edward G. Robinson) plays a total wimp, a meek bank cashier and amateur painter who is being given a party for 25 years of faithful service.  The bank owner, J.J,  leaves early, and the male guests look out the window to ogle his mistress who waits for him in a car.  Chris is aghast that J.J. would fool around.  (Later, when his henpecking wife-of-convenience accuses him of painting naked women, he blurts out that he’s “never seen a woman without clothes!”)  Clearly, he has a rather sheltered existence.  This theme of J.J. and illicit sex will be carried forward in the film.

By chance, Chris becomes acquainted with Kitty, a vulgar and calculating hooker (it is implied that she is a hooker – it couldn’t be explicit then) for whom he falls completely since she is quite attractive.  She knows that some foreign frenchy painters get big bucks for their weird canvases, and when she hears that he paints, she assumes he’s rich and famous – he seems so intelligent and cultivated.  He lets her think as she wishes – he’s in love!

Johnny is Kitty’s pimp, and he slaps her around a lot, but she really loves him, and he wants money, so she puts the moves on Chris.  (She says to Johnny that she only lets him kiss her, improbable, but Chris is a wimp!)  Chris stays late and is stealing cash from the bank when J.J. comes in – “Ah, I caught you just in time!” –  to ask Chris to quickly cash a “personal” check.  We all know the money is for his girlfriend.  Chris has his own stash in an envelope right on the counter, and he gets away with it!  He sets up Kitty in a Greenwich Village apartment, and to save his paintings from the dustbin where his wife wants to put them, he brings them all there.   Johnny sees them and decides to sell them since Kitty thinks they’re worth so much, but what do they know about art!

Kitty is quite a gal.  The movie is based on a French novel, La Chienne, or The Bitch.  She doesn’t like it when Chris complains about Johnny hanging around the place – he’s just a friend.

In one fit of anger, she rages at Chris from her room, finally relenting when he begs to paint her.  Sure, he can paint her…toes.  And “they’ll be masterpieces“, she growls.

Turns out, the paintings get snapped up by a big art critic at a sidewalk art show in Washington Square.  Chris paints in a sort of naive, magic-realist style that gets the art guys going bonkers – they love it!  Kitty starts signing his pictures, and a gallery uptown is selling them for really big bucks.

When Chris finds out what’s going on, he’s not mad, he’s happy.  Through Kitty…and Johnny…he achieves his dream of recognition for his art!  He’s a genius!  He says to her, “It’s almost like we were married, but I’ll use your name!”  Yup, and she finally consents to let him paint her portrait, and what will he call it:  Self-portrait, of course.  Illusion, cultural cross-dressing, identity theft…so much at work here!

But Johnny won’t disappear.  Chris catches Kitty and Johnny making out, and he runs off, mortified.  Now those voices start in.  Over and over again, he hears what Kitty said, “I love you, Johnny!”  So, he returns to her apartment and confronts her.  She taunts him, insults him, tells him that he’s ugly, and old, and not a man!  “I’d never marry you, ha!!”  And whaddya know…Chris kills her, punctures her several times with an ice pick.  I didn’t think he had it in him! 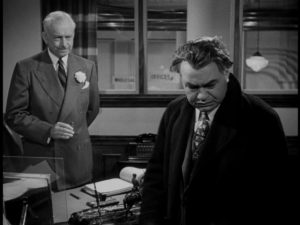 Back at his office, the cops come, and he meekly offers his wrists for the handcuffs, but J.J. wants a word with him.  It’s not for the murder:  the cops are there because J.J. found out about the stolen money.  “Was it for a woman?” he asks.  J.J. knows all about that sort of thing.  He doesn’t press charges – but he fires Chris from his job.  What will he do now but wander about?

So what about that murder?  Johnny get’s hauled in for it, of course.  And the circumstantial evidence points that way.  Chris always hated him – he won’t confess, and this is when thing get really crazy.  We get a rapid fire set of images of people testifying at Johnny’s murder trial.  He says he’s set up, he says Chris did it, he tells the court that Chris loved Kitty and painted those canvases!!   What a joke!  Chris Cross, the wimp painted that brilliant art?  It could only have been done by a woman, a genius, so say the critics.  Chris Cross a genius with a lover?  His wife relates what a loser he was – the very idea that he had an original notion in his head or made it with a sexy woman is ludicrous.  Nobody  believes Johnny.

But, man! We’re still not done!  There’s more.  Chris follows the trial, and on a train, he encounters a group of reporters going to cover Johnny’s execution – it’s all over the news.  One reporter says that Johnny really cooked his own goose when he lied about who painted those pictures.  Another one tells him that “Nobody gets away with murder!  There’s a little judge and jury right inside you.  Even if you don’t land in jail, you go on being punished, every day.”  Amen, doesn’t Chris know it.  He hears those voices:  “I love you Johnny.”  “He killed me too, Kitty, but now we’re together forever!”

Johnny takes that long walk to the chair, and his footsteps echo down the hall… 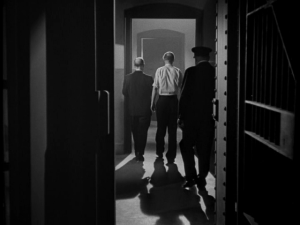 Chris’ artwork remains in the windows of the fancy galleries, with her name on it, while he is a vagrant, vainly trying to convince the cops to arrest him and execute him for “killing some people six years ago!”  What a looney! 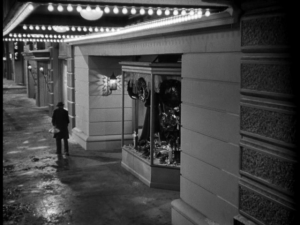 This entry was posted on Thursday, January 21st, 2010 at 3:12 pm and is filed under Uncategorized. You can follow any responses to this entry through the RSS 2.0 feed. You can leave a response, or trackback from your own site.