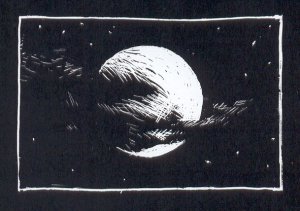 Comics are in color too, but I prefer the black and white variety.  Thomas Ott makes stories using scratchboard, rectangles of white material covered with India ink.  The artist scratches to reveal the white underneath – once a popular medium for newspapers since it is so easy to photograph and print.  The image above, from Ott’s Tales of Error, is a wonderful example of the way light can be made to shine out of pure black.

Ott’s stories in that book are full of little O’Henry plot twists and Twilight Zone effects, but I felt they fell flat more often than not.  His images, from what I have seen on the Internet, are all similarly focused on the bizarre, the grotesque, and the plain ugly.  His wordless “novel”, The Number, however, is very successful.

In a series of beautifully designed pages, the bizarre story of a prison executioner is unraveled as he is led on to his doom by a series of numbers on a slip of paper dropped by a murderer sent to death on the electric chair.  At first, the numbers, popping up in unpredictable ways in his life, give the man luck, but that’s gotta change!  Here the man, and his new girlfriend, return home after a successful go at the roulette wheel, using the numbers as a can’t-lose system. 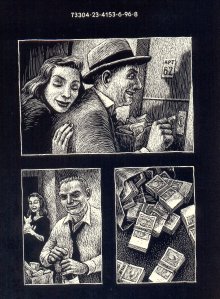 The end of the tale isn’t surprising, but the way that the logic is worked out to its predestined conclusion is nice, and the drawings are wonderful.

Another favorite B&W scratchboard example is Peter Kuper’s comic adaptation of Franz Kafka’s Metamorphosis. The expressionistic style of the stark black and white compositions works well with the story, and it is very true to the spirit and humor of the tale.  (Yes, Kafka is funny! )

Finally, a black and white image done with pen and ink, and reproduced in the newspapers of 1925 – a Sunday panel from Krazy and Ignatz, by George Herriman.  I have dipped into these before because they are celebrated widely as a high point of comics, a great 20th century achievement in art and satire, and a deep poetical statement about…well, lot’s of things.  At first, I was merely amused, but found them a bit tedious.  Now, however, having followed them a bit, as Sunday readers would have, I can say that the more I read, the more seduced I am.  They have a unique atmosphere and sensibility:  surreal, dadaist, poetic, satirical, slapstick, and always composed with sophistication and wit.  One never knows what will come next.

The plot line of the series is quite simple:  Ignatz Mouse lives for nothing but to throw bricks at the head of Krazy Kat.  Officer Pup tries to stop him, but usually fails.  Kat seems to take the endless attacks as a sign of true love, because when a brick hits someone else in one strip, he is very jealous.  I’ve not fathomed all the motives of Ignatz yet.

Sounds like a dada version of a Greek tragedy.  Here the Kat muses on the nature and source of time in a typically arid and otherworldly landscape.

Here Ignatz thinks he’s come upon a source of bricks to last him for a near eternity of head-smashing attacks on Kat.

This entry was posted on Sunday, January 31st, 2010 at 4:28 pm and is filed under Uncategorized. You can follow any responses to this entry through the RSS 2.0 feed. You can leave a response, or trackback from your own site.

One Response to Black & White Again