Heart of a Dog, encore

This Russian film adaptation of Bugakov’s Heart of a Dog is really quite wonderful.  It faithfully presents the book, almost word for word it seems, and adds a few scenes for context and emphasis that are not in the novel.  At first, it seemed a bit tedious, too faithful to the text, but once Sharikov, the dog-become-man, starts wreaking havoc with the settled life of the good doctor, it’s great.  In fact, I think that the movie enhances the novel in some ways, using costumes and sound to sharpen the satirical jabs at class conflict comedy in the young Soviet state.

In the image above, we see the doctor, a bourgeois Frankenstein, having a heart-to-heart with his creation, who has taken the full name, Polygraph Polygraphovich Sharikov.  Sometimes a dog has wisdom to impart to a graduate of Moscow University, if only he would listen!

Like any good citizen, Sharikov needs his papers to be in order.  You must be ‘registered’ to live in Moscow!  But once he is registered, he is subject to conscription in the militia.  Sharikov, with the heart of a dog and the soul of a street hoodlum, has no interest in fighting.  The house tenant director tells him, ” You are lacking in political consciousness, comrade!”  What’s a dog, er man, to do.  On one side, harried by stuffed shirts who live “like they are always on parade,” and on the other, slogan-spouting party politicals.

In the end,  the doctor has had enough, so he and his assistant fix things up.  Everything is returned to its natural order, and peace reigns once again in the doctor’s flat.  Man and dog are happy. 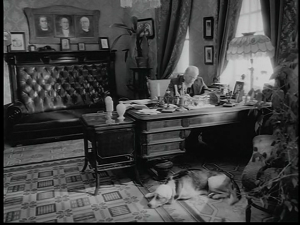 This entry was posted on Friday, February 26th, 2010 at 11:15 am and is filed under Uncategorized. You can follow any responses to this entry through the RSS 2.0 feed. You can leave a response, or trackback from your own site.

One Response to Heart of a Dog, encore