Death in the Garden 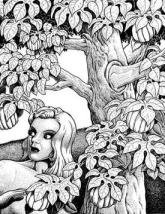 Death in the Garden is a film from 1956 by Luis Bunuel.    The plot is one we have seen many times in cinema:  an unlikely group  of characters is forced to work together in order to survive in hostile circumstances, outside of the boundaries of civilization, and in the process, their personalities and the old class distinctions begin to disintegrate.  Nothing at all surprising here, and the film is, in fact, rather straightforward for those expecting a wild dash of surrealism, but that is not to say it’s boring.  No, it was a wonderful, surprising, and sometimes poignant movie.  It’s also in stunning 1950s color.

Our group comprises a rather uptight priest, a brash prostitute used to running her own show, an elderly miner, her former customer, who has decided to marry her and take her back home to France with him, the miner’s daughter, a pretty young woman who is mute, and a handsome adventurer running from the law.  They all must flee their one-horse town in the South American wilderness when the high-handed actions of the corrupt local military man provoke an armed uprising.  The miner and adventurer are falsely accused of crimes, the whore is implicated with the miner, and the priest…at first he is taken against his will, but after that, he’s a marked man too.

With the setting of the Amazonian jungle, it’s clear that The Garden refers to Eden.  The philosophical and religious themes are piled on one after another, but with delicious irony and humor – you could ignore them if you wish and just enjoy a really good adventure yarn.  Now and then, there is a touch that jumps out as distinctly Bunuel, but mostly his presence is felt in the sure direction, the interplay of image and idea, and the portrayal of human culture and norms as just this side of bizarre when seen in the context of nature’s ‘garden.’

I had never seen Simone Signoret as anything but a plump and almost matronly older figure.  Here she is in her early bombshell days:  first meeting with Chark, who is happy to pay for her company; in the jungle with the priest for company, desparately in need of a bath.

Chark kills a snake, and saves them from starvation.  Later, the priest sees the remains swarming with ants.  What would a Bunuel film be without ants?  Was the priest having a vision, or does he really see it? 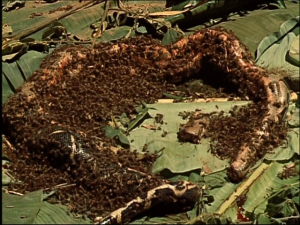 We see a shot of Paris at night, cars honking, and suddenly it’s an old snapshot of Paris by the light of their jungle campfire, the film suddenly runs down and the audio stops… Reminds me of the film breaking in Bergman’s Personna-which came first? 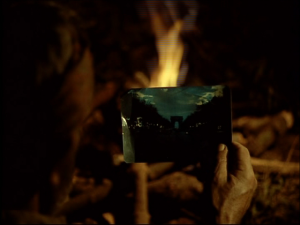 They are saved when they come upon the wreck of an airplane that was carrying a load of rich vacationers.  Suitcases yield food, drink, fancy clothes, and even jewels!  We see a well dressed woman opening a jewel box, and then are jolted to see it is the young Maria, dressed up, searching through the luggage.  The priest tries to inject a note of law and order, but the lovely young girl is dazzled by the apples, er…jewels.

Djin, the whore, “looks like a real lady,” and makes quite an impression on Chark.  They like each other, but they have to get past the fact that she turned him in to the police for a cut of his cash.  What a bizarre shot this is – high fashion in the wilderness. 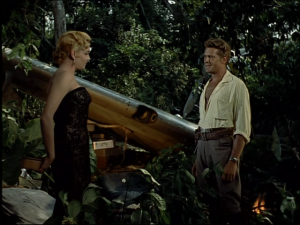 Obviously, this idea has a lot of appeal for people today. 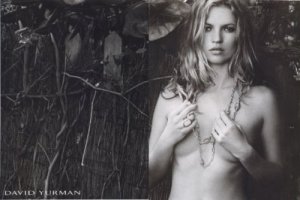 The images below say it all:  bare skin, the jungle, raw passion, jewels, civilization stripped away…I saw the advert on a huge billboard driving home from the airport after watching the movie on my flight.  It exploits the jewels on naked-savage-skin opposition for different ends.

She’s tempted, but she’s innocent.  Two of the group survive to escape down the river in a shot that brought to mind the end of The Great Escape, when Charles Bronson floats down a stream to freedom in a small boat.

This entry was posted on Friday, July 2nd, 2010 at 8:22 pm and is filed under Uncategorized. You can follow any responses to this entry through the RSS 2.0 feed. You can leave a response, or trackback from your own site.

One Response to Death in the Garden