Ninotchka (1939) is a fairy tale about the transformation of a political animal into a full-bodied woman.  As a slave to the Garbo gaze, I can’t help but like this film.  I saw it as a boy after hearing my mother talk about the tag line used by the studio, “Garbo laughs!” Laugh she does, and the film is witty and entertaining, with some very strange dark notes for us post-WWII viewers.

The story begins with some hapless Russians, bumbling diplomats charged by the Soviet government with the task of selling off some jewels confiscated during the Revolution.  The USSR needs hard currency badly because its harvests are so bad.  The three bumblers are seduced by the pleasures of Paris and fail miserably in their job.  Garbo’s no-nonsense, hard as nails character is sent to remedy the situation.

Waiting to meet their superior, whom they do not know, at the train station, and expecting a man, the diplomats at first follow a likely fellow who looks the part.  Nope, he’s a Nazi.  Finally, they realize the dour Nina Ivanovna Yakushova, aka Ninotchka, waiting on the platform, is the one.  How are things in Moscow, comarade?  Very good!  The latest mass trial was a great success.  There will be fewer but better Russians now! Black humor indeed! 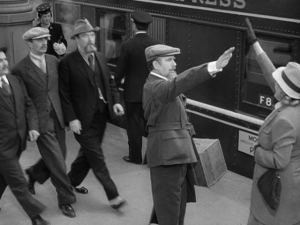 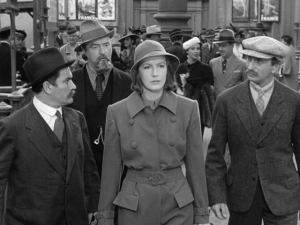 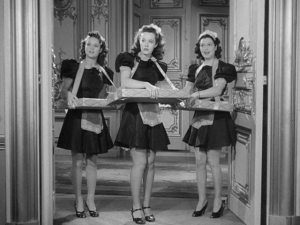 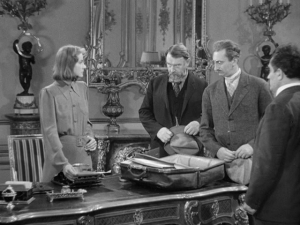 Melvyn Douglas plays a smooth character, Count Leon d’Algout,who meets Nitnotchka by chance outside her hotel.  He also happens to be the lover of the émigré noblewoman whose confiscated jewels are the subject of the bumblers’ mission, but that comes out later.  Leon attempts to charm Ms. Soviet but can’t penetrate her caricatured facade of rationality, logic, statistics, and 30’s stlye political correctness.  Viewing the city from the Eiffel Tower she remarks that it’s beautiful, but a waste of electricity.  Nevertheless, no slave to convention, and ever eager to study the natives of the decadent west, she goes to his apartment.  She is honest and self-aware enough to admit that they have a great chemical attraction to one another.

He asks her just what kind of girl is she?  Just what you see.  A tiny cog in the great wheel of evolution. He avers that she is the most beautiful tiny cog he has ever seen. 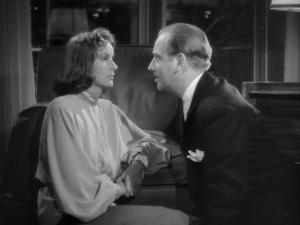 In the hotel lobby, she is surprised and disgusted by a hat for sale.  So impractical and frivolous, not to mention expensive.  She could probably by a few cows for what that hat costs!  It’s an odd style, but I guess on fashion’s leading edge at the time.

After their mutual interest in the jewels is revealed, Ninotchka puts off Leon, but he persists and follows her into a working class bistro for lunch.  He makes a funny show of trying to convince her that he always eats here, and loves the company of workers.  Vowing to drag a laugh out of her, he starts on a series of jokes, all of which meet with utter failure. 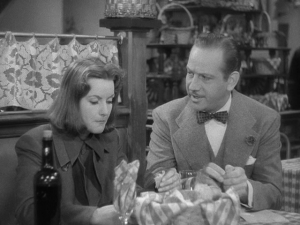 The explosion comes by accident.  He is exasperated, moves away, and falls off his chair.  She laughs. 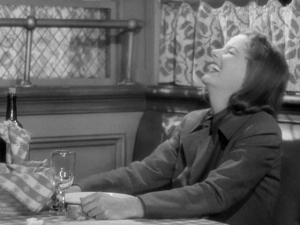 They laugh together.  It’s wonderful.

Transformed by her love for Leon, she notices that the weather is fine, there are birds outside while snow is still on the ground in Moscow.  We have the high ideals, but they have the climate, comrades. Stuck in Paris for two weeks until the dispute over the jewels can be settled, what shall they do?  One fellow suggests a visit to the sewers, most instructive. 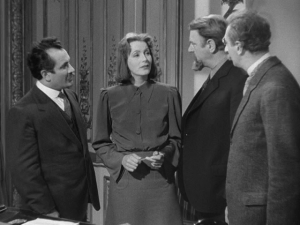 She goes and buys that hat and puts it on after ridding herself of her underlings.  Woman confronts fashion…and herself.  In Wilde’s story, The Birthday of the Infante, a dwarf jester dies of a broken heart after being scorned by the spoiled princess and then seeing himself in a mirror for the first time in his life.  He realizes he is truly ugly, and the princess is so beautiful.  Here, Ninotchka sees herself in the mirror, and seems to see herself for the first time, and she is beautiful.  No longer a cog in the inevitable triumph of Marxist-Leninism, she sees herself as a woman.  Of course, a woman in love with a man. 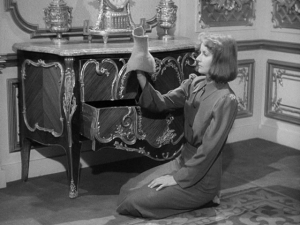 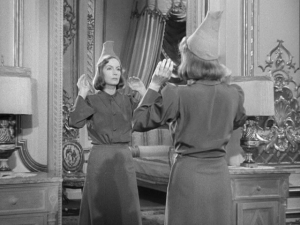 She’s really quite forward – she knocks on Leon’s door.  Those Bolsheviks have a point about doing away with the old traditions.

After a late night and far too much champagne, Ninotchka pours out her heart to Leon.  She’s so happy, surely she will be punished for it.  Nobody can be so happy and not suffer for it.  It’s her Russian soul speaking, and perhaps a intuition of what awaits her back in the USSR.

She tells Leon she knows what her punishment should be.  She should be stood up against a wall…  Leon obliges.  Blindfolds her, raises it for a kiss, and then goes to get his weapon of execution.  Quite a titillating scene if you choose to read it that way.  With the sound of the cork popping off, she starts as if shot and sinks to the floor.  Now I’ve had my punishment.  Let’s go on with the party she declares!

This is Hollywood romatic comedy, and Leon is a gentleman, so after she collapses into a heap, he carries her to her bedroom and gives her a kiss while Lenin looks on.  Will they make a loving couple, or must they be a bourgeois-Marxist ménage à trois ?

Ninotchka is forced to return to Russia without Leon.  He tries to write to her and to get her out.  Life is pretty grim in the Socialist Paradise. 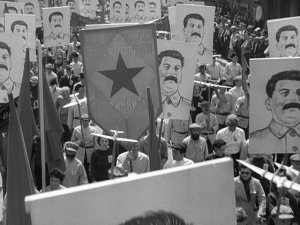 This entry was posted on Thursday, August 19th, 2010 at 11:08 am and is filed under Uncategorized. You can follow any responses to this entry through the RSS 2.0 feed. You can leave a response, or trackback from your own site.