When the [Black] Saints Go Marchin’ In 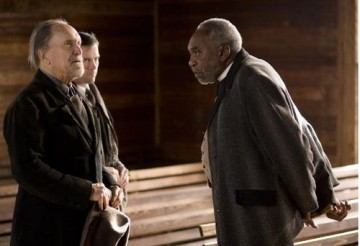 I took a break from my diet of  40’s and 50’s noir to venture into contemporary cinema, and landed in Get Low a movie about a curmudgeon hermit with a terrible secret he longs to get off his chest.  The actors, Duvall and Spacek, are fine, but the film was dull:  it might have made a good short.  But I want to comment on the figure of the black preacher, Charlie Jackson, that Felix (Duvall) goes to for help with his redemption. Felix wants to throw a funeral party, for himself, while he’s alive, and he wants Charlie to do the formalities.

Long ago, Felix was involved in a destructive love affair, and he took on the hermit’s life out of shame for his actions, but before he retired from the world, he roamed a bit, and used his amazing carpentry skills to build a church for Charlie and his black congregation.  Now, Charlie is the one he wants to preach at his ‘funeral.’  Charlie plays the role often seen in American television and movies of the perfect [black] man.

Judges, wise, older counselors, loving and understanding grandmothers who set everything right – even oracles who know all before it happens, these are the roles in which we often see African Americans.  Of course, they play lots of other roles too, but this sort of odd tokenism is limited to them, I think.  What does it mean?  Is it a way of sentimentalizing them as opposed to dealing with them as real people?  Is it a superficial working out of guilt over the centuries of slavery and Jim Crow, similar to the sentimentalizing of Native Americans?  In this film, it serves to heighten the individuality and outsider nature of Felix – in the early 20th century in Tennessee, he built a black church!  Sort of like a saint who goes and does good works in a leper colony.

And Charlie is a good guy.  He’s a cranky old codger, sort of humorous, and the two white characters who fetch him are amused by his crotchetiness.  He speaks well, and is the voice of wisdom, at first refusing to participate until Felix will confess on his own, but then relenting out of higher humanity.

The pure fantasy of all this becomes jarring when he speaks at the party to a crowd of rural folks who have come, almost every last one of whom is white.  They listen respectfully.  Huh!?  This is circa 1930 rural Tennessee.  A black preacher speaking at the ‘funeral’ of a white man?  I imagine the actual reaction would have been more along the lines of “Who the hell is that N—–, and who let him in here?”  The reviewer linked in the first paragraph, a child of the South, seems to agree.

So, perhaps that is the role of the saintly black men and women.  Now we know that they are as human as we are, and we leave no doubt about that by showing them as perfect, even in historical situations where nobody felt that way at all.  And we can all dream that it really was that way.  So the way people are now, which is partly the result of those times, isn’t something we need to think about too much.

This entry was posted on Sunday, September 12th, 2010 at 4:33 pm and is filed under Uncategorized. You can follow any responses to this entry through the RSS 2.0 feed. You can leave a response, or trackback from your own site.

5 Responses to When the [Black] Saints Go Marchin’ In