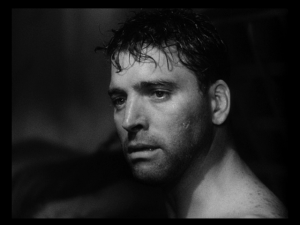 Brute Force (1947) is a prison melodrama about a joint filled with guys put there for crimes that were, well, really not so bad.  Just a bunch of guys who made some mistakes, got shafted – all good men really.  A grifter taken by a beautiful babe, a veteran of the Italian campaign in WWII, a clerk who couldn’t help stealing to get that wife the fur coat she knew she deserved…that sort of thing.  Not too realistic, but this film is a dark fable, an allegory of social class oppression, and the guys in stir are everyman-types standing in for the rest of the working stiffs outside who never have a chance.  Add a blood curdling sadistic-fascist power structure, and you have a film that leaves the good guy-bad guy fairy tale way behind as it descends into the darkest depths of film noir.

The reinforced concrete architecture of the penitentiary looks like something from a German expressionist film set, or maybe Loudon, from The Devils.  Like a medieval fortress, the way out is barred by massive gates and a drawbridge.  The impassive guards manning machine guns in towers bring to mind the Nazi death camps. 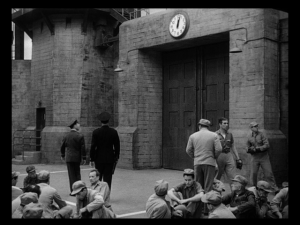 The associations with the Nazis are focused on the character of Captain Munsey, a sneering, ambitious sadist who fancies himself the bastion of civil society against the criminal animals he guards.  In one of the most blatant and disturbing sequences, he tries to beat some information about an escape plan out of a prisoner.   We first see him cleaning his gun, his shirt off, music – sounded like Wagner to me – playing in the background.  A phonograph, engravings of classic art, the whole deal, and his own portrait in uniform surveys the scene. 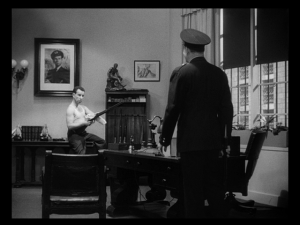 Then Munsey gets down to business with his rubber hose, pummeling Louis, who is handcuffed to a chair.  We never actually see the rubber hose hit flesh – the censors insisted that be cut out. 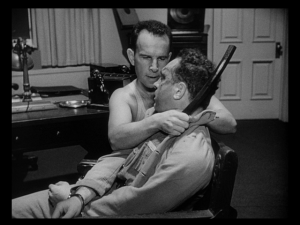 The escape plan is set for the workers on “the drain pipe.”  It’s a giant tunnel, a make-work project, that has no discernible purpose.  The plan is doomed, of course.  Doc warns Collins, but it’s no use. 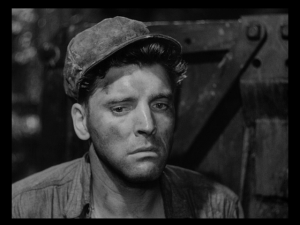 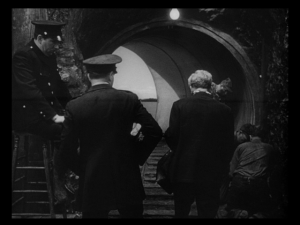 Munsey is waiting with a machine gun at the escape point, and he tells the guards who seem uncomfortable at the prospect of shooting down unarmed men that there is “no reward for bringing them in alive.”  Collins smokes out the informer by asking his men what position they want to take during the break.  All but one say, “Wherever you put me.” The rat says, “Last, that’s where I can help most.”  The last shall be first – he’s put at the front of the car and is shot by the guards. 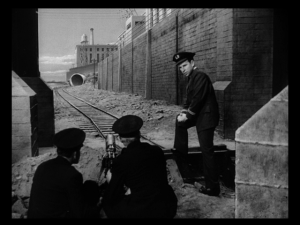 The system of oppression victimizes everyone, although not in the same way.  An earlier scene stages a debate on prison policy in which a pompous and impatient official berates the warden for the lax discipline in the joint.  The humane doctor points out that there is not enough opportunity to keep the men employed and that the prison is 100% over capacity.  He accuses the official of blowing hot air just to seem like he’s dealing with the problems, but all he wants is to shove it, and the men, under the rug.  Eventually, the warden, a well-meaning but feeble man, is forced to hand over the place to Munsey, the sadist.

Women figure in this movie only in flashbacks about life outside, and for the most part, they’re just trouble.  One is a sharp cookie who entices and then fleeces and flees.  Another wants nothing but a fur coat out of life, and she’s troubled only momentarily by how her husband finds the dough to buy it…then the knock comes at the door.  Yvonne de Carlo plays an Italian girl in love with a soldier who brings her food.  She kills her fascist father to protect him, but the MP’s pin the killing on him.  Only Collins has an untroubled love that’s pure – he dreams of a pretty young woman dying of cancer, confined to a wheelchair – he just wants to break out and get her the money for the operation that will cure her.

In the end, the guys in cell R17 get out:  they get out the only way one can.  As the doc says, nobody ever really escapes.  And so it is in life too.  We none of us get out of here alive.

This entry was posted on Saturday, February 12th, 2011 at 11:31 am and is filed under Uncategorized. You can follow any responses to this entry through the RSS 2.0 feed. You can leave a response, or trackback from your own site.