Blast on the Levee

Last night, the Corps of Engineers blew a hole in the Birds Point Levee to allow the Mississippi to discharge into a huge, flat area of farmland.  The outlet is intended to cause the river level to drop, protecting the town of Cairo, IL, and relieving stress on downstream levees during this time of torrential Spring rains.

The image below shows the western levee (yellow line) that forms the boundary of the floodway area which extends eastwards from there to the Mississippi.  The dynamiting of the levee was part of a plan, used once before in the 1930s, after the floodway was constructed in response to the disastrous flood of 1927. 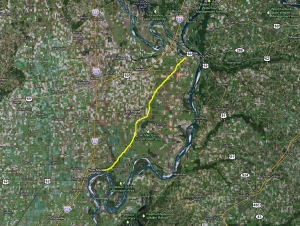 Naturally, the few hundred people who live and work in the floodway were not pleased with the decision of the Corps, and the plan was appealed all the way to the Supreme Court.  Ahem…why were they living there?  The government had purchased flood easements from them.  As this blogger notes

… noted that state and local policy in Missouri, which somehow allowed about 100 houses to be built in the floodway, shares blame.  In the 1980’s I worked as a river scientist in Missouri.  I ran into strong Libertarian leanings, and some of the most hard-core of those folks farm land protected by big Federal levees.  Who want government to leave them alone.

Yes, the feds should spend millions to protect the land, pay for easements, but never, ever carry out a plan that is part of the original purpose of the levees in the first place.  Libertarian sentiment dovetails nicely with self-interest.

This entry was posted on Tuesday, May 3rd, 2011 at 11:59 am and is filed under Uncategorized. You can follow any responses to this entry through the RSS 2.0 feed. You can leave a response, or trackback from your own site.