Another film by Meville (the title translates as The Second Wind, as in another chance) with some new turns by the cast in Army of Shadows.  This one is about the world of gangsters, but its tone is not much different from that of his drama of the French WWII resistance, and the theme of honor and loyalty to comrades is important to both.

Lino Ventura plays Gustave ‘Gu’ Minda, a very tough thug whom we meet at the opening in the midst of a silent jailbreak.  One man falls to his death:  no one bats an eye.  The only thing that gets Gu excited is the notion that he might be a rat, and the not-too-bright police chief, Fardiano, spreads the story that Gu informed in order to drive him crazy, and maybe to talk.  Eventually, Gu exacts a terrible revenge that includes a signed statement that he did not inform on his mates to be delivered to the newspapers.  His honor among fellow thieves is his 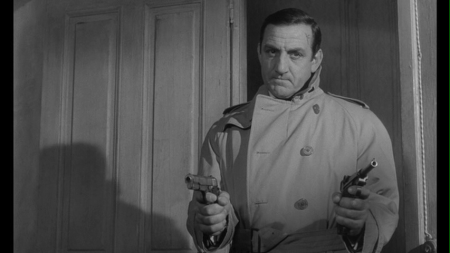 life.  Even the Machiavellian police inspector, Commissaire Brot, grants him his due – after nabbing him  – by allowing the letters to be given to the newspaper.  Brot is always just a little closer to his prey than we expect in a big league Parisian policeman.

The glamor in the story radiates from Manouche, whom we, or at least I, thought was a love interest of Gu’s at first.  She is brought to his hideout for an elegant dinner, for which another thug brings Gu the proper attire.  They embrace on meeting, but we don’t see their faces, so it’s not obvious if their lips are meeting.  Most of the summaries I see of this film assume that they are engaged, or lovers, but later in the story, she is introduced as Gu’s sister.  During dinner, she says,  “We’ve been crooks since we were kids (les gosses)”.  Melville certainly is intrigued by mystified sibling relationships – a key element of the plot of Army of Shadows.

Here’s a post from another blog where the writer observes:

Manouche ( Christine Fabréga ) runs a chic Parisian restaurant, she is very concerned when she learns of Gus’s escape. Is she his girlfriend? An ex-lover? No, she is in fact his sister and their relationship is an intriguing and unique one.

In Melville by Rui Nogueria, Melville says that in French gangster slang “sister” is a term for girlfriend.  I believe Manouche is really Gu’s sister but the implied incest adds a compelling dimension to their relationship and Melville says “If I’ve let it be understood that Manouche is Gu’s sister, it’s because of the Enfants Terribles part of me- or rather because of the great homonyms Pierre or the Ambiguities.”

Jean-Pierre Melville (born Jean-Pierre Grumbach) using one of  Melville’s lesser-known novels to dispel ambiguity – what a rabbit hole to go down!

The film is based on a novel by the author who wrote the story of Le Trou.

This entry was posted on Sunday, May 15th, 2011 at 6:16 pm and is filed under Uncategorized. You can follow any responses to this entry through the RSS 2.0 feed. You can leave a response, or trackback from your own site.