Those who waste their time at this blog will not be surprised that I think there are film makers, and there are artists who make films, and Stanley Kubrick was one of the artists.  Full Metal Jacket (1987), is his second war film (after Paths of Glory) although war figures in many of his films, of course.

I remember when I first saw it thinking that it was very odd.  It’s actually almost two separate films:  the first part is about training to be a marine; and the second part is about the fighting during the Tet Offensive around the city of Hue, the one that famously had to be destroyed in order to be saved.  Watching the film again, I see better how they fit together.

Matthew Modine plays, Joker, a young recruit who undergoes the brutal, humiliating, and physically exhausting training of all marines.  We don’t know why he, or any of the others, wants to be a marine, and it’s hard sometimes to keep in mind that he’s only a young man, perhaps not even in his twenties.  What does he know about anything?  He seems to have inklings of deeper issues – he explains to a screaming officer that he wears a peace symbol on his body armor and has “Born to kill ” on his helmet because he “was thinking about the duality of man, Sir! the Jungian thing…Sir!”  He definitely seems more drawn to the killing side of man’s nature, however.

Kubrick was fascinated by machines, and the metaphorical process of rendering human beings into mechanical, de-humanized things.  The goal of marine boot camp, with all of its crushing physical labor, endless psychological assaults, and endless, machismo and obscenity, and seemingly pointless drill (invented as a training process during the 18th century, which knew a thing or two about mechanism – think of the battle scene in Barry Lyndon) is to break the man down to nothing and build him back up to a member of the unit.  A man who cannot conceive of himself as separate from the unit, and its mission, and who will obey orders, run towards danger, and fight to the end without flinching.  To make him a part of a fighting-killing machine.  The world outside of the marines ceases to be of importance or worthy of respect:  only the Corps, the unit, and the mission count.  Old norms are dumped: thus, the endless trash-talking about fucking your sister, or your mama, who’s even better…

This is what prepares the men for combat in Vietnam, and how this warrior ethic and training play out in the ambiguous, corrupt and murky killing fields of Nam is what the second half shows.  It’s not a pretty picture.  This is no Greatest Generation fantasy that Tom Brokaw might spin into a best seller.  The enemy is not always clear.  Sometimes the enemy may be us.  After all, the first casualty in the film is Pyle, the witless, overweight private (Vincent D’Onofrio), who finally makes the grade, but at the cost of his mind.  Actually, he’s the second casualty:  he shoots his drill sergeant first.

The men have no clear notion of why they are there, and seem perplexed that the Vietnamese don’t appreciate the mayhem they bring. A few soliders, like the screaming officer who says that inside every gook there’s an American trying to get out have very naive, imperial notions.  Others, like the helicopter machine gunner who mows down peasants and water buffalo – Ain’t war hell?  Ha, ha, ha! – have gone over the edge into evil.  Joker observes, but what he thinks is not shown:  he does nothing to prevent it.

The film begins with shots of the new recruits being inducted as maggots by having their heads shaved:  say goodbye to civilian life!  While the drill sergeant is an equal opportunity abuser, disrespecting all races and creeds equally, the white on black, and west on Asian racism is thick, especially once the men are in combat.  In combat, all the men are equal and comrades, but when it comes to priority with whores, the only locals with whom the guys interact, they have to wait in line for whitey.  We leave these gentlemen warriors as the march away from a successful but bloody engagement with a female sniper heartily singing the Mickey Mouse anthem.  Joker’s voiceover tells us of his joy to be alive and short (his balls intact) 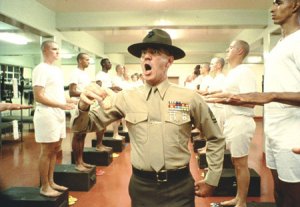 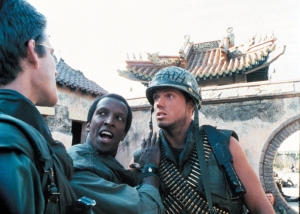 This entry was posted on Sunday, September 25th, 2011 at 8:46 pm and is filed under Uncategorized. You can follow any responses to this entry through the RSS 2.0 feed. You can leave a response, or trackback from your own site.