Le cercle rouge (The Red Circle), is another Melville love song to American crime flicks (and American cars!)  It’s in color, but pretty bleak looking, appropriate for un film noir véritable.  It begins with a phony Buddhist text about the inevitability of men meeting in the red circle – I love that he made that up! – predestination and fate.  The moral heft is provided by a pipe smoking bewhiskered policeman who informs his subordinate that “tout les hommes sont cupables:” all men are guilty.  All.  They start out innocent, but it doesn’t last.  A nice dose of Christian original sin and French cynicism in the otherwise amoral tale.  Between the Eastern fate and the French sin, the red circle is pulled tightly around the men in the film.

I did say men, didn’t I?  I don’t think there is a woman with a speaking part in the story.  Women exist only as chorus girls in a tacky nightclub, scantily clad waitresses who pout a lot with their pretty faces, and one naked woman eavesdropping, and appearing in a photograph which the ‘hero’ contemptuously discards on his release from jail.

The story revolves around an ambitious heist in a deluxe jeweler’s showroom.  There’s a fancy alarm system that only a crack marksman can disarm.  The theft takes place in almost complete silence, and lasts for nearly one half-hour of the film, a nod to Rififi, no doubt, and just as in that movie, they all die.  There is a great sequence during the heist when the marksman, Yves Montand, after carefully setting up his tripod and rifle for the crucial shot at a miniscule target, suddenly grabs the gun off the stand, his comrades in crime are confused and surprised, but in one quick move, he raises the gun to make a sight and hits the target.  That’s good shooting!  Bart, from Gun Crazy, would approve. 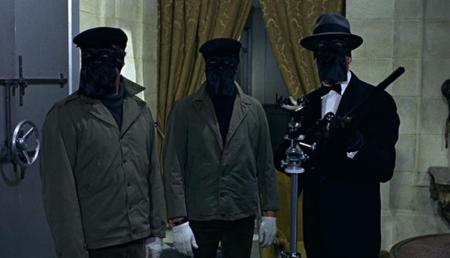 The film begins with a prisoner, the ugly fellow below, being escorted on a train by a cop, handcuffed together.  The prisoner makes a brazen escape when the train slows down, and the cop is in hot water.  His superior asks him, “Did you think he wasn’t guilty?”  implying that he let his guard down because he was not tried and convicted yet.  Tout les hommes sont cupables.  The cop seems like a bit of a goof – we see him fussing over his cats – but he’s got what it takes in the end.

The escaped man meets Corey (Alain Delon) by chance, or fate as it were.  Delon’s sang froid is matched by the damp, icy landscapes through which they drive, shooting and looting.  The movie was a joy to watch, especially after a string of B-movie noir duds I’ve tried. 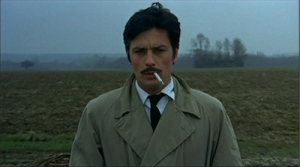 Yves Montand plays an ex-cop gone bad who happens to be suffering from the DTs when Corey taps him for this new job.  He declines his share of the loot:  he’s just happy to be off the sauce, with his ‘beasts’ locked away.  The images below are from his nightmare just before he gets the phone call to join the heist crew.  I like the iguanas, of course.

He makes a pretty quick, and not all that believable, recovery from the depths of alcoholism, finishing up with this sequence as he cooly lowers his pistol for a dead-on shot at his pursuers.  It doesn’t do him any good, of course.

This entry was posted on Tuesday, October 25th, 2011 at 7:20 pm and is filed under Uncategorized. You can follow any responses to this entry through the RSS 2.0 feed. You can leave a response, or trackback from your own site.