“Life affirming?” or simply trash?  To say that you don’t like a film like Going Places, 1974 (the original French title is slang for “testicles”) is to immediately fall into the camp of the stuffy bourgeois uptight people against whom it tried so hard to transgress.  To say that it is a meaningless exercise in superficial nihilism mixed with sentimentality is, to some critics, to offer it high praise.  What’s a crank to do?

Gérard Depardieu and Patrick Dewaere play two narcissistic, sadistic, and thoroughly macho-misogynistic hoods who rob and screw their way across southern France in this ‘existential’ road movie.  Oh, they’re not really misogynistic, because they are really happy when their sex partner (Miou-Miou) finally has an orgasm with a young ex-con.  They’re just angry that they didn’t give it to her.  Of course, this is after they abused, terrorized, and shot her earlier in the film, but she likes their style.

The two buddies love each other.  And when there are no girls around to fuck, the big one will screw the smaller one.  (One of the errors repeated in many reviews is that they do not have sex, but it’s pretty clear that they do.  And the raped one says he feels humiliated.  His buddy says it’s natural between friends.  Another error is to call Isabelle Huppert a co-star, when she’s onscreen for only a few minutes at the end.)  They force themselves on women with a mixture of brutal charm – they are handsome – and outright intimidation.  But hey, they are always laughing.

The amazing thing about this film, besides the scenery, is that it isn’t totally revolting, but then I’m not a female.  It’s very slick, beautifully shot, and the actors are great.  It’s just…er…why make this film?  Unless you really are into machismo bonding and treacly buddy sentimentality, and why is that anything but the same old, same old?  Oh yes, there’s Jeanne Moreau, tragically beautiful, making love to the two young hunks and then shooting herself in the vagina so she can have a period one last time…pretty sick, eh?  But it’s art.  There’s also a fair amount of comedy, sometimes right out of Laurel and Hardy; two guys, similarly dressed, different physiques, moving in sync.

Cars, stolen and borrowed, are a crucial prop in the movie, symbolizing bourgeois materialism and providing locomotion in this road movie.  The Citroen DS, France de luxe, is the car that starts them going and ends the film.  (The boys hate France – stealing a Citroen has got to really stick it to the buggie establishment!) Their old Citroen breaks down, and they ‘liberate’ Huppert from her stifling bourgeois family after she calls her father a stinkin’ engineer.  Ooh!  She drives away with them in Daddy’s DS, after telling the hoods that Maman has 200,000 Francs in her purse.  When she reveals to them that she’s a virgin, the two guys do her while Miou-Miou holds her head in her lap.  God, what nice guys they are.  They leave her by the side of the road because it would be kidnapping to keep her with them, despite her pleas.  Hope they left her car fare. 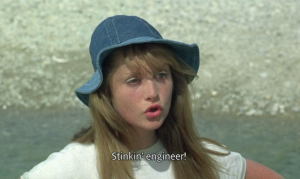 As they career around the mountain curves, Jean Claude (Depardieu) muses, Why not just drive until we run out of gas?  It doesn’t matter where we go.  We have the sunlight, the fresh air, we can fuck whenever we want…  Sooo existential, so absurd!  I’m just gonna run and get my copy of L’Etranger right away!

This entry was posted on Sunday, November 6th, 2011 at 9:08 pm and is filed under Uncategorized. You can follow any responses to this entry through the RSS 2.0 feed. You can leave a response, or trackback from your own site.