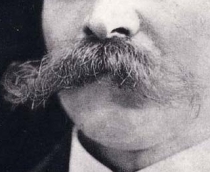 Readers of this blog know that I have been hard on Nietzsche.  Maybe I’ve been too hard on him because of the nutty followers he attracts – but that’s not his fault.  Through the prompting of a young philosophy grad, I have been reading through The Gay Science in a ‘modernized’ edition of an old public domain translation (T. Common & B. Chapko) available on the Kindle, and I’ve found much to like.

Well, I am preoccupied with problems of knowledge and the mind-body relationship, and Nietzsche is not, but he does address many over-arching concerns of philosophy; philosophy in the general sense of a discipline that asks, “How shall we live?” or “How do we reconcile ourselves to the world as it is?” quite well.  In many ways, he is similar to what Huxley called The Perennial Philosophy, the ideas found in Zen Buddhism as well as the Twelve Steps of AA.

Step One:  I am powerless over…  Grant me the serenity to accept what I cannot change…

I want more and more to perceive the necessary characters in things as the beautiful… I do not want to accuse the accusers.  Looking aside, let that be my sole negation.  …I wish to be at any time hereafter only a yes-sayer!

Poor guy, Fred!  He lived at a time when the most stupid, racist, self-serving, and morally smug notions were trumpeted as eternal truths from the press (You vomit your bile, and call it a newspaper! – Zarathustra) and in which bald-faced lies were presented by pillars of culture as true.  Not so different from today.  In addition, a ‘muscular Christianity’ was the excuse for all sorts of international brutality and oppression over less technologically developed cultures.  Perhaps all his talk of war and battle is his metaphor for moral struggle, similar to the Islamic take on jihad, or perhaps he is ironically tweaking his contemporaries for their preoccupation with tin-horn glory, the military ‘virtues,’ and their genocidal violence – the Philosopher vs. Teddy Roosevelt.  Worth considering.

His writing shows a keen understanding of science, and of Darwinism in particular.  In his desire to embrace the whole person, intellect and instinct – he recognizes that instinct lives on, and is not eclipsed by culture – he denounces those who condemn the ‘natural’ in man.  It’s easy to take this as a romantic and irrational rebellion against the materialism and moral dogmatism of the 19th century, but he is more subtle than that.  He sees man as a unique element in nature, part of nature, but ‘existentially’ different, because aware of nature.  A difficult concept to navigate:

Nor is he too bad when he considers technical issues dear to my heart, such as the usefulness of assessing the nature of knowledge from a historical and Darwinian point of view, rather than a contemplative, Cartesian one:

Throughout immense stretches of time, the intellect produced nothing bu errors:  some them proved to be useful and preservative of the species:  he who fell in with them, or inherited them, waged the battle for himself and his offspring with better success.  … Those erroneous articles of faith which were successful were transmitted by inheritance and  which have all become almost the property of and stock of the human species, are, for example the following:  that there are enduring things; that there are equal things; that there are things, substances and bodies; and that at thing is what it appears to be; that our will is free; and that what is good for me is also good absolutely.

Necessary notions for the fledgling hominids.  Philosophers are not known for their rough and ready survival skills.  Logic, too, evolved from this basis, so what is its status as an ultimate truth?  And why seek for the analytic justification of it?  (Ernest Mach addressed similar questions about the fundamentals of scientific investigation.)  And this, on the ultimate epistemological notion:

Cause and effect:  there is probably never any such duality; in fact there is a continuum before us from which we isolate a few portions:  just as we always observe a motion in isolated points, and therefore do not properly see it but infer it.  … An intellect which could see cause and effect as a continuum , which could see the flux of events not according to our mode of perception, as things arbitrarily separated and broken – would throw aside the conception of cause and effect, and would deny all conditionality.

There is energy, and minds, such as they are, divide it into quanta which ‘we’ take for reality.  And the success of this strategy is the evolution of organisms with minds like ours.  But our minds are limited:

Sometimes I wonder if all these questions aren’t just a problem of scale.  As the scale of things changes, some things disappear.  As we walk around, we are not aware of quantum effects at the sub-atomic level; we aren’t even aware of molecules…  What if the same sort of effects relate to time – what would that do to our notion of causality and determinism?  As we ‘zoom’ our time-scale out to the enormous, everything would appear to be happening at more or less the same time … [from Free Will and All That]

This entry was posted on Saturday, January 14th, 2012 at 12:24 pm and is filed under Uncategorized. You can follow any responses to this entry through the RSS 2.0 feed. You can leave a response, or trackback from your own site.