The End is Near, again… 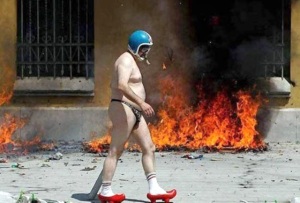 Just had to parse this one…
Game Over for the Climate
By JAMES HANSEN
New York Times, May 9, 2012

GLOBAL warming isn’t a prediction. It is happening.  That is why I was so troubled to read a recent interview with President Obama in Rolling Stone in which he said that Canada would exploit the oil in its vast tar sands reserves “regardless of what we do.”[Most scientists agree that the Earth has gotten warmer in the last 150 years, but there is disagreement over just how much, and why.  The IPCC says it is highly confident that ‘most’ of the observed warming is due to mankind’s use of fossil fuels.  If the observed warming is 1 or 1.5 degrees, F, that’s 0.5 or 0.75 degrees due to mankind, so what about that other half?  It’s not much, anyway.]

If Canada proceeds, and we do nothing, it will be game over for the climate.  [The game will go on, with us or without us…]

Canada’s tar sands, deposits of sand saturated with bitumen, contain twice the amount of carbon dioxide emitted by global oil use in our entire history. If we were to fully exploit this new oil source, and continue to burn our conventional oil, gas and coal supplies, concentrations of carbon dioxide in the atmosphere eventually would reach levels higher than in the Pliocene era, more than 2.5 million years ago, when sea level was at least 50 feet higher than it is now. That level of heat-trapping gases would assure that the disintegration of the ice sheets would accelerate out of control. Sea levels would rise and destroy coastal cities. Global temperatures would become intolerable. Twenty to 50 percent of the planet’s species would be driven to extinction. Civilization would be at risk. [Saying that the tar sands contain more CO2 than we have produced throughout history sounds shocking, but could be said about any of the major fuel reserves, coal, oil, natural gas, that are left.  It amounts to saying that if we burn up everything on earth for fuel, we will have discharged more CO2 than in all of human history.  Similarly, there are more people alive today than the sum of all who have lived before.  It’s a sound-bite.  Hansen goes on to assume that this will happen quickly, and that the effects will be just as he predicts, although such a thing has never happened before.  He assumes the Doomsday scenario of polar ice meltdown, and ignores the possibility that if his predictions appeared at all correct, that people would stop using fossil fuels.  Right now they have little reason to, if they listen to just him.]

That is the long-term outlook. But near-term, things will be bad enough. Over the next several decades, the Western United States and the semi-arid region from North Dakota to Texas will develop semi-permanent drought, with rain, when it does come, occurring in extreme events with heavy flooding. Economic losses would be incalculable. More and more of the Midwest would be a dust bowl. California’s Central Valley could no longer be irrigated. Food prices would rise to unprecedented levels.  [Hansen has been making predictions for decades.  The only one that is indubitable is that the concentration of CO2 in the atmosphere did rise.  Will he keep score on these?]

If this sounds apocalyptic, it is. This is why we need to reduce emissions dramatically. President Obama has the power not only to deny tar sands oil additional access to Gulf Coast refining, which Canada desires in part for export markets, but also to encourage economic incentives to leave tar sands and other dirty fuels in the ground. [Glad he recognizes that he is being apocalyptic.  If we ‘reduce emissions dramatically,’ just what will be accomplished?  How much is ‘dramatic?’  Has he asked the Indians, the Chinese, and the rest of the developing world?  Most reduction scenarios that are at all technically, politically, and demographically plausible will have minimal impact, if his models are correct. ]

The global warming signal is now louder than the noise of random weather, [according to him, who made the prediction…] as I predicted would happen by now in the journal Science in 1981. Extremely hot summers have increased noticeably. We can say with high confidence that the recent heat waves in Texas and Russia, and the one in Europe in 2003, which killed tens of thousands, were not natural events — they were caused by human-induced climate change. [Whoa!  That’s a claim.  I wonder who he includes in that we can say?  I would like to see the scientists who will sign onto that statement!]

We have known since the 1800s that carbon dioxide traps heat in the atmosphere. The right amount keeps the climate conducive to human life. But add too much, as we are doing now, and temperatures will inevitably rise too high.[They will rise, but how much they will rise is the million dollar question.  His predictions depend on feedback loops that are speculative.] This is not the result of natural variability, as some argue. The earth is currently in the part of its long-term orbit cycle where temperatures would normally be cooling. But they are rising — and it’s because we are forcing them higher with fossil fuel emissions.

The concentration of carbon dioxide in the atmosphere has risen from 280 parts per million to 393 p.p.m. over the last 150 years. The tar sands contain enough carbon — 240 gigatons — to add 120 p.p.m. Tar shale, a close cousin of tar sands found mainly in the United States, contains at least an additional 300 gigatons of carbon. If we turn to these dirtiest of fuels, instead of finding ways to phase out our addiction to fossil fuels, there is no hope of keeping carbon concentrations below 500 p.p.m. — a level that would, as earth’s history shows, leave our children a climate system that is out of their control. [Hmm…is the goal to have a climate system that we control?  Then adding CO2 is the way to go!  We cause it, we control it!  I agree, however, that reducing the use of ‘dirty’ fuels is a good idea for a lot of reasons.]

We need to start reducing emissions significantly, not create new ways to increase them. We should impose a gradually rising carbon fee, collected from fossil fuel companies, then distribute 100 percent of the collections to all Americans on a per-capita basis every month. The government would not get a penny. This market-based approach would stimulate innovation, jobs and economic growth, avoid enlarging government or having it pick winners or losers. Most Americans, except the heaviest energy users, would get more back than they paid in increased prices. Not only that, the reduction in oil use resulting from the carbon price would be nearly six times as great as the oil supply from the proposed pipeline from Canada, rendering the pipeline superfluous, according to economic models driven by a slowly rising carbon price.  [Here here!  By all means, let’s tax carbon and make the cost more closely approximate the real cost, including all the externalities.  I’d love to see it!  We could do all sorts of great things with the money, including fund research on major alternative energy technologies.  At the very least, the result would be a serious drive towards efficiency and conservation.]

But instead of placing a rising fee on carbon emissions to make fossil fuels pay their true costs, leveling the energy playing field, the world’s governments are forcing the public to subsidize fossil fuels with hundreds of billions of dollars per year. This encourages a frantic stampede to extract every fossil fuel through mountaintop removal, longwall mining, hydraulic fracturing, tar sands and tar shale extraction, and deep ocean and Arctic drilling. [Well, here I more or less agree.]

President Obama speaks of a “planet in peril,” but he does not provide the leadership needed to change the world’s course. Our leaders must speak candidly to the public — which yearns for open, honest discussion — explaining that our continued technological leadership and economic well-being demand a reasoned change of our energy course. History has shown that the American public can rise to the challenge, but leadership is essential.[Agree here too, but not with him!]

The science of the situation is clear — it’s time for the politics to follow.  [If it is so clear, then why is consensus presented in terms of statistics based on computer projections that are subject to great uncertainty?  The amount of science that is clear, e.g. that CO2 causes some warming, does not occupy the core of what the policy debate is about, which is basically an assessment of risk.]   This is a plan that can unify conservatives and liberals, environmentalists and business. [Dream on, prophet.]  Every major national science academy in the world has reported that global warming is real, caused mostly by humans, and requires urgent action. [This is flatly untrue and dishonest.  There have been many statements that global warming is real, that humans contribute to it, and that if current predictions are correct, the effects could be serious.  That’s a very different statement.]  The cost of acting goes far higher the longer we wait — we can’t wait any longer to avoid the worst and be judged immoral by coming generations.

This entry was posted on Friday, May 11th, 2012 at 1:07 pm and is filed under Uncategorized. You can follow any responses to this entry through the RSS 2.0 feed. You can leave a response, or trackback from your own site.

4 Responses to The End is Near, again…