Big Eyes, Black Hair, and Out of Her Mind 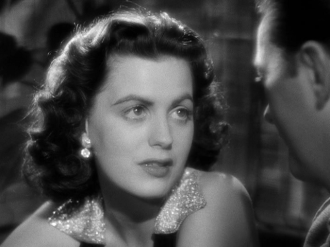 This is a post about one film, Where Danger Lives (1950), and by extension, all those  femme fatale sisters to Margo Lannington (Faith Domergue) that prey on weak, flawed, emotionally impotent young men.  Oh, and they’re nuts too.  I am thinking of  Ann Savage in Detour, Barbara Stanwyck in The Strange Love of Martha Ivers, and Ann Byth as Veda, the helium voiced neurotic daughter of Mildred Pierce (Joan Crawford).

Where Danger Lives was directed by John Farrow, married to Maureen O’Sullivan, who has a small and awful part in the flick, and father to Mia.  The story seems too slow at times, and it almost veers into comedy on a few bits.  What stays with you is Margo’s character, her looks,  and the fantastic scenes with noirish lighting.

Robert Mitchum is Dr. Jeff Cameron, a fine young man who lives to help his patients.  The film starts with his tender ministering to a girl in an iron lung, and a young boy with a neck brace.  His girlfriend Julie (Sullivan) helps, and looks on approvingly. We hardly see her out of her mask.  A young woman is rushed in, an attempted suicide, and Cameron is put on the case.  The big hunk saves the helpless beauty’s life, but who is the strong one? 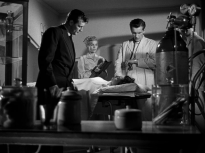 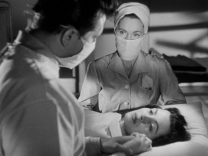 As she wakes from her stupor, Margo notices the big handsome guy taking her pulse, and she  instantly takes his, so to speak. Clasping his hand, she whispers sultry nonsense while nurse Julie gives Cameron the eye.  She takes off for home before Doc can look in on her next morning, and sends him a telegram, begging him to visit her:  she owes him an explanation.

That cat on the doorstep will be important later on…and not in a good way.  She looks healthy enough; so much so, Cameron forgets all about Julie.    Still, for the moment, he’s just being the doctor, trying to make sure she doesn’t try to kill herself again.  She’s so weak, needs his protection, his help… 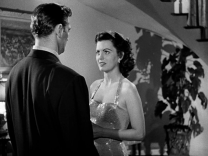 Margo refuses to submit to proper care, so Cameron goes for the phone, and grabs her wrist when she tries to interfere.  You can tell by the look on her face that she’s thrilled to have her arm twisted by him.  “You’re hurting me!”  She says it like an invitation to sex.  The good doctor still has a few wits about him, and he’s thinking, “What’s with this dame?”

We learn later that Cameron is not, repeat not a psychiatrist, so how could he tell that Margo is totally crazy?  Perhaps her eyes distracted him?  He’s a man who is easily diverted from the straight and narrow, a classic noir type. 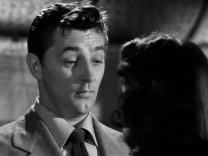 Next thing we know, Cameron is walking through a club in a very long tracking shot filled with extras coming and going.

He sees Margo’s back, waiting for him in a booth.  Lots of shots with windows and mirrors in this one.  He bends over behind her to greet her…

She turns, and begins to slip the mink stole from her shoulders…

This action, as the mink drops away, is as close to stripping as you can get without actually doing it. 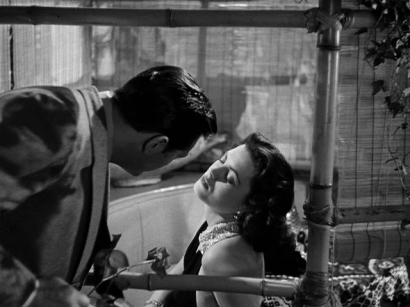 We learn that they have been seeing each other for a week.  She says her father insists that she leave that night for the Bahamas:  she must obey, or she’ll be cut from his will and have nothing!  He only wants her, of course.  Oh, it’s not to be. After a last kiss, he gets drunk, and gets an idea.

A totally drunk Cameron takes a cab to the house to retrieve Margo.  Claude Rains has one scene in this film, and he makes the most of it.  He’s Frederick Lannington, father…er…the husband of Margo, and he wants to tell Cameron what a “long road” he’ll be going down, with “no turning back,” if he runs off with her.  He sees right through Cameron, saying “her clinging vine act makes you want to protect her.”  Margo pulls out the stops, pretending that he bloodied her by ripping an earring off her.  Cameron responds on cue.

A fight ensues, and Lannington beats Cameron with a poker before he’s knocked out with a fist.  Cameron goes to get some water to revive him, but he’s suffering from a concussion.  He’ll be in and out of lucidity for the rest of the picture, a damaged, weakened male, in thrall to la belle dame sans merci.  While Cameron’s out of the room, Margo finishes off  hubby with a pillow 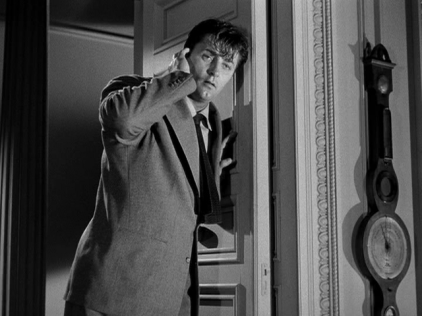 Only in his concussed and lust-besotted state would an intelligent doctor with a thing for helpless people listen to Margo’s pleas and decide to flee with her to the Bahamas.  She’s convinced him that he killed Lannington with his punch, accidentally, of course.

Their escape has several vignettes that border on screwball, and includes a lot of sharp characters and ironic misunderstandings. They flee the airport at the sight of some cops looking for Lannington (Cameron poses as him.) but they are only trying to deliver a bon voyage message.  Later, they narrowly avoid a police blockade, supposedly set up to catch them, but it’s just the agriculture department looking for contraband vegetable imports. They end up in a scruffy border town where they are ‘arrested’ by a bunch of cowboy types who inform them that because they are not wearing whiskers, they must make a donation to the local fire department…or get married.  They choose the latter.

Things don’t go well when they share a room.  Margo rips the power cord out of the radio:  she doesn’t want Jeff to hear the news – he’ll learn that she has a long history of hospitalization for mental illness.  She doesn’t like to be pitied!

When they finally make it to a seedy border town, they are tricked into giving up their last valuables to pay to be smuggled across the border.  Jeff begins to have his doubts, about her, and about whether he’ll survive his head injury.

He tries to talk sense to her after she finally admits that she killed Lannington.  He’s too weak to restrain her as she follows her own ideas, and decides to smother him the way she did hubby. 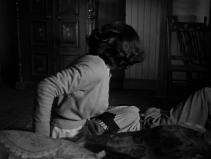 Margo thinks Jeff is dead, and she goes out to cross the border on her own.  She didn’t do the job right, though, and he follows her. She shoots at him, and is shot by the police.  Cameron gazes pitiably at her dying figure while the cops say he’s the accomplice.

Ha!  A final dollop of scorn from the dangerous woman as she informs the police that he could never kill anyone!  Didn’t even have the sense to know that she had done it!  (Ah…Jeff is in the clear now!)  No way he could ever have given her what she wanted, what she needed.  She loathes him. “Nobody pities me!”  She dies… 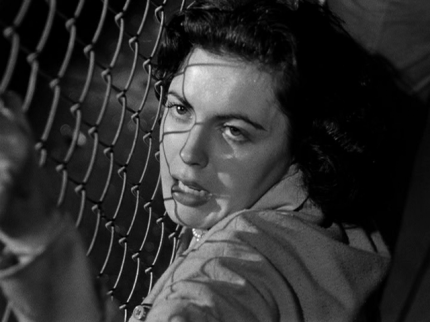 Steve recovers from his concussion, and in the last scene, Julie returns to him.  Uh…why?  Because somebody said they needed a happy ending.

I never posted about Mildred Pierce, so here are two images of Veda the Destroyer in all her glory.

This entry was posted on Wednesday, September 12th, 2012 at 11:28 am and is filed under Uncategorized. You can follow any responses to this entry through the RSS 2.0 feed. You can leave a response, or trackback from your own site.

3 Responses to Big Eyes, Black Hair, and Out of Her Mind