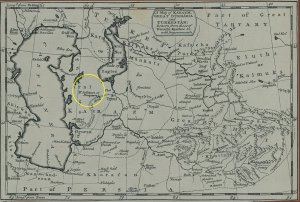 Soul is a novella by Andrey Platonov, who also wrote the fascinating, disturbing, and enigmatic Foundation Pit.  Thanks again to the NYR Books imprint for publishing these new translations.  The story tells of a young engineer who returns to his homeland to ‘save’ the Nation that gave him birth.  It’s a very mystical and dreamlike take on Stalin and the ‘nationalities problem.’  It reads like a metaphysical poem crossed with a J.G. Ballard story, and the language is less difficult than that of The Foundation Pit, but no less precisely styled, at least as far as translations allow us to glimpse it.

The ethnic group from which the hero springs inhabits the area shown in the yellow circle of the map above, one of my collection.  I like maps of that region:  they are so incomplete, so lacking in clear national boundaries, standing in the cross-roads of colliding and migrating cultures.  Also, the Aral Sea is there, a great monument to modern hydrological radicalism.  The NYRB edition includes a map of the region:  the different shape of the Aral is not due only to changes in mapping science in the intervening 300 years; it’s disappearing rapidly.

I have not read all of the stories in this collection, but The Return, the wrenching tale of a WWII veteran coming home after the war, and The Third Son, the very short story of the return home for the funeral of their mother of an old man’s six sons, are remarkable.  Both stories leave us with a sense of the transcendent humanity inherent in universal domestic events.

Platonov was a remarkable genius. 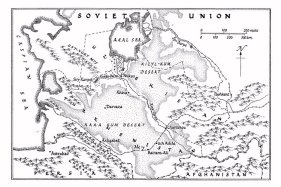 This entry was posted on Thursday, September 27th, 2012 at 4:11 pm and is filed under Uncategorized. You can follow any responses to this entry through the RSS 2.0 feed. You can leave a response, or trackback from your own site.