Lady Audley’s Secret and the PRB 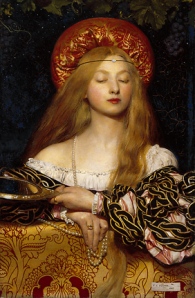 Lady Audley’s Secret (1862) by Elizabeth Braddon, is a pot-boiler that was fantastically popular among the Victorians.  (Thanks to that savage reading guy for pointing me to yet another good read.)  The book falls within the genre of “sensation novels,” dealing with explosive forbidden topics, e.g. incest (see A. S. Bayatt’s novella Morpho Eugenia, or its great film adaptation, Angels and Insects, for a modern take on this.), madness, murder, adultery, and the like.  I’m not giving much away by saying that Lady Audley’s secret involves madness and murder, sort of…

There’s nothing too surprising or shocking in the plot for a modern reader, except perhaps how anti-climactic the unmasking of Lady Audley turns out to be:  After she is confronted with her crimes, the novel carries on with a lengthy dénouement involving yet more not-too-surprising plot twists.  It was all by way of good fun, nevertheless!

It’s interesting to compare the novel to Wuthering Heights published about fifteen years before:  that could be seen as a sensation novel of a sort, if you accept the Heathcliff-Catherine incest Freudian interpretation.  All the tempestuousness of Lady Audley would barely muss the hair of the demonic and haunted inhabitants of Wuthering Heights!

Lady Audley is a nice example of the Pre-Raphaelite femme fatale.  Here is a passage from the novel that makes that explicit:

If Mr. Holman Hunt could have peeped into the pretty boudoir, I think the picture would have been photographed upon his brain to be reproduced by-and-by upon a bishop’s half-length for the glorification of the pre-Raphaelite brotherhood [PRB].  My lady in that half-recumbent attitude, with her elbow resting on one knee, and her perfect chin supported by her hand, the rich folds of drapery falling away in long undulating lines from the exquisite outline of her figure, and the luminous, rose-colored firelight enveloping her in a soft haze, only broken by the golden glitter of her yellow hair—beautiful in herself, but made bewilderingly beautiful by the gorgeous surroundings which adorn the shrine of her loveliness. Drinking-cups of gold and ivory, chiseled by Benvenuto Cellini; cabinets of buhl and porcelain, bearing the cipher of Austrian Marie-Antoinette, amid devices of rosebuds and true-lovers’ knots, birds and butterflies, cupidons and shepherdesses, goddesses, courtiers, cottagers, and milkmaids; statuettes of Parian marble and biscuit china; gilded baskets of hothouse flowers; fantastical caskets of Indian filigree-work; fragile tea-cups of turquoise china, adorned by medallion miniatures of Louis the Great and Louis the Well-beloved, Louise de la Valliere, Athenais de Montespan, and Marie Jeanne Gomard de Vaubernier: cabinet pictures and gilded mirrors, shimmering satin and diaphanous lace; all that gold can buy or art devise had been gathered together for the beautification of this quiet chamber in which my lady sat listening to the mourning of the shrill March wind, and the flapping of the ivy leaves against the casements, and looking into the red chasms in the burning coals.

Note the reference to PRB photo-realism, and the emphasis on how female allure is enhanced by the material abundance of the interior.  This is materialist kitsch-decadence at its finest, or worst, depending on your taste and morals.

Lady A feels cursed by her physical beauty because it gave her the means to work her will upon the world, giving rein to the “taint of madness” in her blood, inherited from her mother.  But she makes good use of it, turning it into a powerful witchcraft with which she bedazzles and ensnares her male (always rich, or so she thinks!) prey.  She has a horror of ordinary, pedestrian life, without the richness of ornament to confirm and reflect her splendid female charms.  Exiled to a posh maison de santé (bourgeois euphemism for madhouse) at the end, she shrivels up and dies without an audience with energy for her to feed upon.

Just a note on the authoress – she seems to have been a sympathizer with the South in the Civil War.  So much of the British elite was – that’s where they got their cheap cotton to keep their mills humming.

Let us hope that when Northern Yankeedom has decimated and been decimated, blustering Jonathan may fling himself upon his Southern brother’s breast, forgiving and forgiven.

Keeping the UK from intervening to help the South was a major diplomatic initiative of the Lincoln administration.

Here’s a gallery of PRB images of women, including a few by William Holman Hunt. 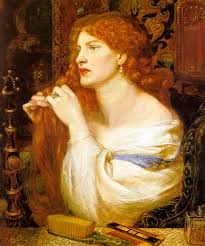 This entry was posted on Wednesday, October 23rd, 2013 at 10:38 am and is filed under Uncategorized. You can follow any responses to this entry through the RSS 2.0 feed. You can leave a response, or trackback from your own site.

3 Responses to Lady Audley’s Secret and the PRB