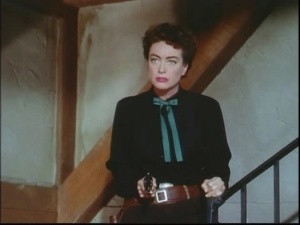 Johnny Guitar (1954), Nicholas Ray.  Joan Crawford… Man, what else can I say?  This western is unlike any other I know.  Martin Scorsese calls it an opera, and he’s right.  That is the only way to make sense of it – the stagey-ness, the set-pieces, the slow paced emotional confrontations, the melodrama of killing, and the claustrophobic sense that there is no real world outside of what’s going on in the frame right in front of us.  Most of the action takes place in one location in town – Three Unities anyone?

You can read many analyses of this film’s political ‘symbolism’ of lynch mobs representing the contemporary HUAC activities. Or the sexual role reversal – all the men are weaklings:  the women do the heavy lifting.  Or the lesbian barely-subtext:  Vienna (Joan Crawford) as a powerful dominatrix, forcing men to cower, and engaging the adolescent love-hate of Emma Small (Mercedes McCambridge).  Vienna wears tight pants, leather, men’s brightly colored shirts and scarves with jeans, and, at one point, confronts the town’s menfolk bent on hanging her while playing a piano wearing a wedding gown – Emma, repressed harpie wears only black and grey.  Read about that elsewhere – I just want to count the men who die for this masculine femme fatale.

There’s Turkey, the young boy-outlaw who has a sort of crush on Vienna.  He gets caught by a the posse of men in black, and is terrorized into implicating Vienna in a bank robbery he was part of.  That’s cause to hang ’em both!  The men promise him if he just talks, tells the truth, he won’t hang.  He lies, and says Vienna was in on the heist,  They take them both out to hang, but only Turkey dies, screaming protests at his betrayal.  Ah, just a kid.  What does he know?  Johnny Guitar is in hiding and manages to cut the noose rope that’s around Vienna’s pretty neck:  he couldn’t save them both, could he?  It’s actually a pretty brutal portrayal of mob murder.

Then there’s Old Tom (John Carradine).  When Vienna pays off her staff and tells them to scram before the posse comes for them too, he hides and stays.  When he witnesses the mob trying to drag Vienna off to be lynched, he shoots and is shot.  Dying in her arms, Vienna asks him, “Why, why Tom – why didn’t you go like I told you?”  The men in black crowd around – “Look, everyone is looking at me now.  It’s the first time I ever felt important.”  Vienna has that effect on men.

Then there’s the Dancing Kid and his gang, of whom Turkey was one.  Bart tries to make a deal with Emma to turn in the gang, and he kills one of mates when the guy won’t go along with the plan.  After he plants a knife in the man’s back he says, “Some guys just won’t listen.”  Johnny Guitar, an ex-gunman, kills Bart, the only man he kills in the film.  He really is done with shooting – prefers to sing and play.  That leaves The Dancing Kid, leader of the gang, and Vienna’s main squeeze before Johnny blew into town.  Emma shoots him as he rushes to protect Vienna from Emma in the climactic scene.  He dies, a bullet in his forehead, his arms raised, seeking transcendence as he calls out Vienna’s name.

And then there’s Emma herself, shot by Vienna, but she is a woman, albeit one of confused sexual identity.

Vienna’s scheme is to hold onto her property until the railroad comes through, and then sell out for piles of cash.  She’s in good with the railroad management.  Her saloon is burned down, but she still owns the land, so I guess she and Johnny will have a comfortable retirement. 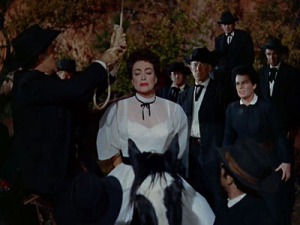 This entry was posted on Saturday, October 26th, 2013 at 7:10 pm and is filed under Uncategorized. You can follow any responses to this entry through the RSS 2.0 feed. You can leave a response, or trackback from your own site.

8 Responses to Let us count the dead men: Johnny Guitar