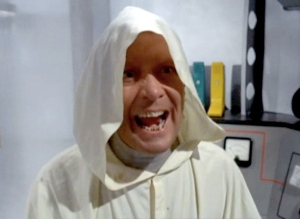 The final episode of The Prisoner, puzzling and infuriating to so many, but in my view, one of the historical high-points of television, is supposed to be when No.6 finally gets an answer to his ceaseless query, “Who is No. 1?”  We have written earlier about No. 6 as The Prisoner of Love, but perhaps he is really a prisoner of Zen, rather than Zenda. (That was a successful novel from the 1890s that was adapted many times for the cinema.)

In the literary Zenda-Prisoner configuration, the heir to the throne of a fictitious nation is drugged and held captive by an evil minister to prevent his coronation.  An Englishman, with a fortuitous resemblance to the heir is used as a double/decoy, to get around the political impasse.  So, is the king-to-be No. 1, or perhaps the evil minister?  Is No. 6 just a decoy…for whom?

When No. 6 rampages through the rocket in the underground chamber where his ‘graduation’ circus is being staged, he is chasing No.1.  He finds him, confronts his masked face – a repeated motif in the show – and rips off the masks, one after another. Finally, he finds, himself, while the sound track says, “I, I, I, I…i…i…   I love you, love you, very much!”  and music plays to a images of the Rover balloon bubbling and boiling, while the rocket starts to launch.

No. 6 is simply a prisoner of himself, his ego, his attachment to the “I”.  Trapped in his worldly illusion, as any Zen master could have told him.  He’ll never get out of that zendo, also known as The Village.

What a lot of fun!

This entry was posted on Wednesday, September 3rd, 2014 at 2:10 pm and is filed under Uncategorized. You can follow any responses to this entry through the RSS 2.0 feed. You can leave a response, or trackback from your own site.