The other day, I watched L’Innocente, Visconti’s film of 1971 based on a story by D’Annunzio.  It was his last film, and certainly not up to the level of Senso.  A narcissistic, decadent, fin de siecle rich guy, Giancarlo Giannini, likes to have affairs, despite being married to a woman who is nearly goddess-like in her voluptuousness, i.e., Laura Antonelli.  (She, by the way, turns in a fine performance here:  not what I expected from the Queen of Italian soft-core sex farces of the 1970s.)

When his wife, oppressed by her desperate situation, takes a lover, he suddenly rediscovers her attractions.  Her lover dies on an African expedition, but she is pregnant with his child.  Her husband, now infatuated with her, demands that she have an abortion, and she refuses, ostensibly on religious grounds (He’s an atheist and freethinker.) but really because she wants the child of her dead lover, whom she mourns secretly.

Possessed by old fashioned jealousy and self-absorption – “I’m a man sick with melancholy, and I enjoy my sickness,” he says – the husband murders the baby.  He thinks that his wife has been seduced into loving him again by his vigorous and slightly kinky erotic ministrations to her, and that she will accept the death of the baby, and move on, with him.  He is wrong – she sees through him and realizes that he killed the baby, and she reveals her measureless hatred of him, confessing that she only pretended to love him again to protect her baby whom she loves as she did his father.

He confesses all to his former mistress, an icy countess (Jennifer O’Neal) and says he is ready to take up with her again. She, despite her relative lack of conventional morals, and her rather cavalier way of dealing with his infanticide, says she’s no longer interested.  She calls him a monster, in a nice way, of course.

Having nothing to live for now – only mere existence stands before him – our existential ‘hero’ shoots himself in the heart while the countess looks on. He wanted her to see how he stands by his principles.  Ho hum…

The costumes are fantastic, and the stifling perfume of the period’s opulence, for this particular class of beings, is, of course – after all, this is Visconti – overpowering in its presentation.  But the story is rather mechanical, and for me, D’Annunzio’s stories are simply a bit ridiculous.

Since I spend so much time looking at old art, I sometimes see things in films… 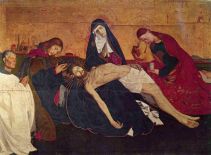 I guess Visconti knew Italian painting as well as I do.  The painting of Jupiter taking on the form of a cloud in order to possess Io (at top, by Correggio) must have been in his mind when he filmed the scene of Giannini carefully and deliberately arousing his wife while making clear his complete (so he thought) dominance of her (below).

This entry was posted on Sunday, September 21st, 2014 at 9:33 am and is filed under Uncategorized. You can follow any responses to this entry through the RSS 2.0 feed. You can leave a response, or trackback from your own site.