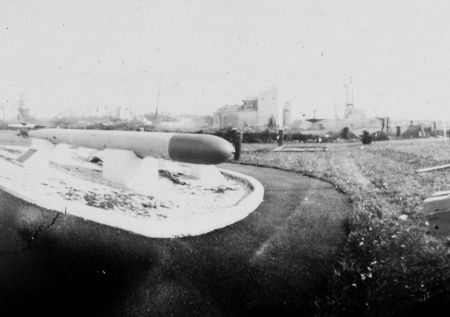 I have always wanted to document the things about northern New Jersey that I like – you know, like the Turnpike, the refineries, the gritty industrial sections…All the stuff Woody Allen joked about and that people claim makes the state a dump.  Well, chacun son goût.

On the Hackensack River, between the town of Hackensack and Teaneck, where I live, is the defunct historical park dedicated to the WWII submarine, the U.S.S. Ling.  Pretty forlorn.  The yard around it is filled with rusting deck guns and torpedoes.  The shot of la torpille was taken with a coffee can camera,  35 second exposure.  I think the bright, low sunlight fools me into using too long an exposure:  it’s more light than it seems.

I had to climb over the gangplank barrier to get this picture of the submarine itself, taken with a 20 second exposure on my wide angle box pinhole, with the vignetting cropped out.

To get from Teaneck to Hackensack, you can drive over the Cedar Lane bridge, which seems to be perpetually under reconstruction.  This is a view of the river looking north:  15 seconds at f165.  The photo is cropped.

Another coffee can shot, this time a church in Hackensack.  It was so windy that I had to put my hand on the camera to steady the tripod, and the sun, blocked by a building on the left, was still wreaking havoc with my exposure of 45 seconds. 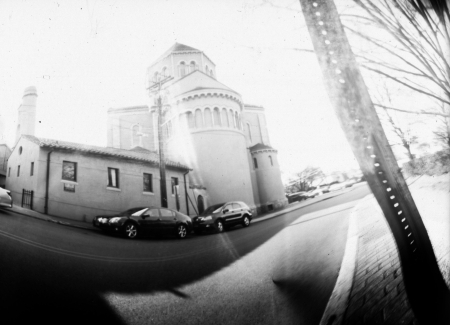 A final Hackensack shot, where the home in the town meets the damp dirty prison:  the Bergen County Jail.  I visit immigrant detainees placed there, previously by Obama: Deporter in Chief, and lately by Trumpy: Dummkopf in Chief.  Again, the low sun fooled me.

And further south, in Kearny, near Newark, NJ, is the fabulous Pulaski Skyway!  Built in the early 1930s, designed by a railway engineer, but intended to carry automobile traffic to the new Holland Tunnel.  Considered to be one of the worst highway segments ever created for cars, it is now under a massive reconstruction, but as a bridge structure, it is sublime!

20 second exposure with f169 on my wide angle box pinhole.  The image is cropped.

20 seconds at f165 with a much longer focal length, so not so wide angle. 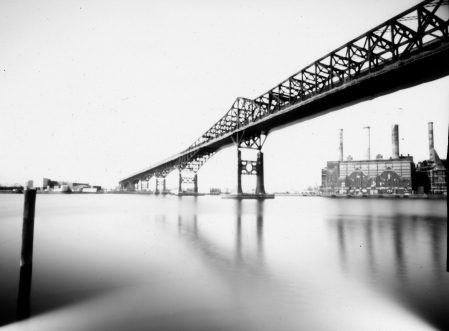 This entry was posted on Tuesday, November 28th, 2017 at 9:26 pm and is filed under Uncategorized. You can follow any responses to this entry through the RSS 2.0 feed. You can leave a response, or trackback from your own site.