Since I love The Blues, and have always wanted to make a visit to the American South, and since I also find rivers and floods fascinating, it was time to finally make a trip to The Delta of Mississippi.  That’s not the Mississippi River delta, which is south of New Orleans, where the mighty river debouches into the Gulf of Mexico, but the oval-shaped region just south of Memphis, TN, alongside of Arkansas, with the Mississippi River separating them.

The region is pancake-flat, and is bordered on the east by hills, on the west by the river.  The Mississippi has changed course over and inundated the region for millennia, and it is intensely fertile.  After the American Revolution, it became the site of some scandalous criminal land speculations, e.g. the Yazoo Strip Affair, and after the Civil War, clearing the hardwood forests and converting it to cotton farming proceeded at a rapid clip, with the support of Uncle Sam in the form of massive flood control works to protect the farming operations.  So much for Southern states’ resentment of federal intervention:  as long as the pork rolled in and nobody interfered with their “peculiar” institutions, e.g. slavery, and then Jim Crow, Washington D.C. was fine in their books.  You can read more about the how the river and the people interacted with the land in this interesting treatment.

Furthermore, I don’t just love The Blues:  I am very partial to the old fashioned, traditional, Delta Blues, the acoustic music that travelled north in the Great Migration, with people such as Muddy Waters, where it landed in Chicago and got electrified, eventually winning a huge audience in the UK, whose rock and roll invaders brought it back to us making it wildly popular among white audiences here too, at least for a while.  When The Beatles were interviewed at an airport upon their first arrival in the USA, a reporter asked who were their favorite American musicians, and among those volunteered by Lennon was Muddy Waters, unknown to the reporters.  “You don’t know who your famous people are,” quipped Lennon.

The two pictures below are from Stovall’s Farm, a plantation where McKinley Morganfield lived, worked, and played, before he got the confidence to up and leave for the North, as so many other black people had done.  His cabin stood on this site, but has been moved to a local museum:  ZZ Top (I don’t know their music, but they know their Blues

!) made an electric guitar out of one of its planks, and used it to raise funds for the restoration of the cabin.  The state of Mississippi eventually got on board the Blues Train, and set up a Blues Trail, with historical markers up and down the region, especially along Highway 61, which Dylan “revisited” in his smash hit record.  (Highway 61 figures in quite a number of Blues songs, as it runs the length of the Delta, and beyond.) 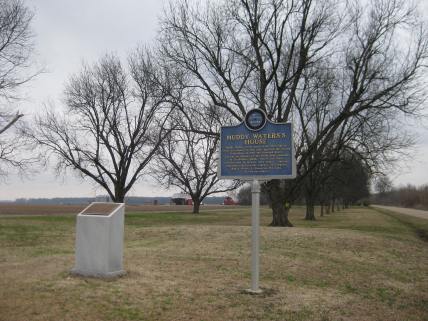 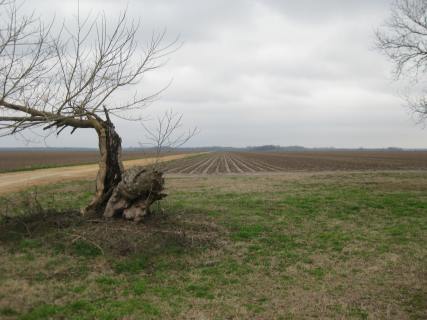 This cabin below is just next to the Muddy Waters site:  it wasn’t his cabin, but it looks as if it could have been!  As my wife remarked, it looks like “it’s right out of central casting!”

We based our visit to the Delta in Clarksdale, where there are lots of places to eat and hear music, great music, and in a relaxed, laid back environment that is wonderful.  We stayed in the very nice Delta Bohemian Guest House, where our comfortable room had a tub, plumbing fixtures, and tiled floor, that thrilled me.  (I understand that not everyone shares my enthusiasms.)

Needless to say, it is Mississippi after all, the area is rather economically depressed.  These shots in Shaw, MS, where I stumbled on the Blues Trail marker for Honeyboy Edwards, a favorite of mine, capture the atmosphere nicely. 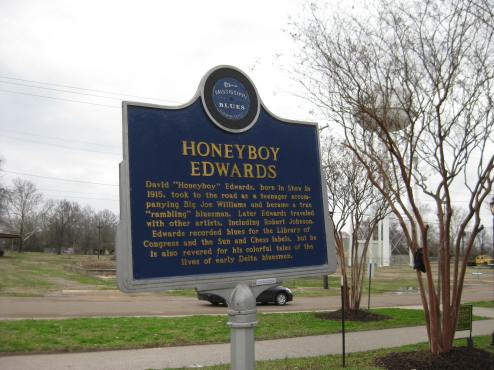 Further south is the not particularly interesting town of Greenville, MS, which was the center of a lot of literary activity as well as a devastated area during the momentous flood of 1927, the relief effort for which, incidentally, catapulted Herbert Hoover to the presidency.  The museum about the flood, the greatest natural disaster in US history, I believe, was closed, but I did manage a brief rain soaked stroll along the top of the levee. 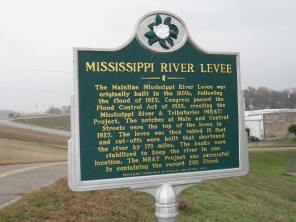 This entry was posted on Monday, February 19th, 2018 at 11:21 pm and is filed under Uncategorized. You can follow any responses to this entry through the RSS 2.0 feed. You can leave a response, or trackback from your own site.