We call it a democracy…

The little data graphic below shows what we all know:  a little over half the people voted in 2016, and of those that did, the plurality voted for Clinton.

Now our elected (?) president has been able to appoint two justices to the Supreme Court, on which they serve for life.  Maybe that made sense in the 18th century when a judge granted a life seat might be expected to stick around for ten, fifteen, perhaps twenty years, but today..?  In the most recent case, the population represented by the senators who voted for or against Kavanaugh shakes out as shown below – a clear majority of the population was represented by the senators who voted against him.  (In cases of states where the vote was split, I calculated a 50/50 split of the population for each side.) 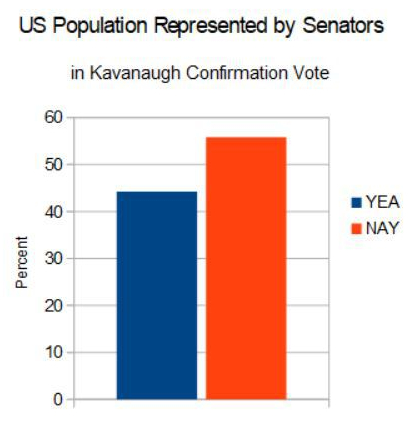 So now we have a president elected by a minority of the population (that voted!) appointing a justice who is confirmed by a clear minority of the represented population, and who can join with his other coreligionist reactionaries to rule on the rights of all of us, as codified in the sacred words written over 200 years ago when, you know, slavery was okay, women didn’t vote, there was no electricity, and not even any TV!

This entry was posted on Tuesday, October 9th, 2018 at 5:21 pm and is filed under Uncategorized. You can follow any responses to this entry through the RSS 2.0 feed. You can leave a response, or trackback from your own site.

One Response to We call it a democracy…