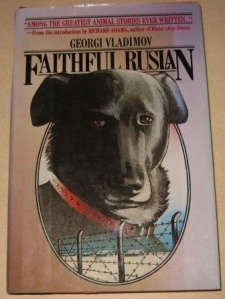 Despite my immersion in the three volumes of Solzhenitsyn’s Gulag, the novels of Vassily Grossman, and other Stalin-era material, I had never heard of Faithful Ruslan, by Georgi Vladmiov.  Many thanks to the author of the anonymous comment at this dog-oriented post who pointed me to it!  Vadlimov is not well-known here, but he should be.

The plot takes place over a year or two at the time of the great political thaw in the USSR, when Khrushchev made his secret speech denouncing Stalin’s great crimes (he did not refer to his own deep complicity in those crimes, of course) and many prisoners of the slave labor system, The Gulag Archipelago, were released.  Ruslan is a guard dog, born and bred to the role, who is let go after his master cannot bear to shoot him down.  He struggles to find a role in the world after his entire universe is upturned, except that he doesn’t really understand how completely it has been ended.  The camp is gone, the prisoners have not escaped: they were released, and they are not returning.

The story is told from a ominiscient (human) point of view, but the portrayal of dog-consciousness is absolutely wonderful.  Inherent in the structure of the tale are many levels of dramatic irony: we, the human readers know things that the hero, a dog, could never know in his time, or ever;  we know things simply by virtue of being readers, many years after the events related; the human characters know things the dogs do not know; and the dogs know, or seem to know, some things the humans do not and could not know.  The fractured points of view which comment on one another give the tale tremendous power.

On another level, the story is an allegory of Stalin’s USSR, and of human subservience to authority in general.  The allegory is not subtle – is subtlety called for in a discussion of Stalin’s rule?  Ruslan regards his hard master as a godlike being, and he lives simply to serve him and love him.  At one point, he dreams of a world in which everyplace is within the barbed wire of a great prison camp – wouldn’t that be wonderful! – but of course, there must be an inside and an outside, or where would you place the malefactors who would not follow the rules?

Through Ruslan’s memories and the conversations of the humans around him, we get vignettes of camp life that are harrowing in their brutality.  This relatively simple tale is very deep, sad, and upsetting.  My copy of this book is an old library edition – I’m not sure if it has been republished lately.  I was aware reading the blurbs and introduction that the great troika of 20th century horrors – Hitler’s genocide, Stalin’s gulag, Mao’s mass-murder by purge and policy – are fading away into history.  Do young people today feel them with the immediacy that I did as a student, though even then it was old news?