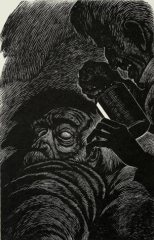 I can try to blame it on the fantastic blog 50 Watts, or on this fine exhibit at The Morgan, but in fact, it’s all on me:  I’ve loved books with woodcuts since I was a boy, and I recently went on a bit of a spree getting illustrated and limited editions of a few of my literary favorites.  None of them are particularly valuable, but all are, as they say, “collectible“.

Above, is an edition of Poe’s tales that was issued in the 1940s, although I recall these images from a library book, perhaps a reprint, when I was in school.  The book is in great condition, and I re-papered the tattered slipcase, one of my new hobbies.  I love that Fortunato and Montresor!

This collection of Poe stories (remember the old song from Mad Magazine?) is part of a series of woodcut-illustrated classics published in paperback by Penguin Books, and featured in the Morgan exhibition.  Found it online, but it has not arrived in the mail yet.

Of course, when it comes to Poe, my favorite, after Amontillado, and distiguished by being his only novel, is the Adventures of Arthur Gordon Pym.  I bought a few editions in French, all translated by Charles Baudelaire, who introduced Poe to France in the 1850s.  This is a nicely illustrated copy from the 1970s.

And here is a first edition of Pym’s Adventures, first edition in French, that is, published in 1858.  Why is it that the French were so far ahead of everyone else when it comes to paperbacks?  The book on the mantle of this well-known painting by Magritte is Arthur Gordon Pym, although I can’t make out the date.

Finishing with Poe, I got this selection of tales, again in French, because I liked the wonderful lithographic illustrations.

Done with Poe!  Candide is one of my all-time favorite books, so I have many copies of it, including a variety of cheap paperpacks, but I decided to upgrade my collection.  This French edition is illustrated by the Italian Umberto Brunelleschi using stencils, or pochoirs.  It was published in the 1930s – quite a racy little paperback. 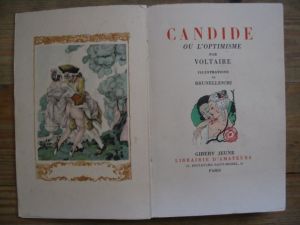 Not in the greatest condition, this one, but it was cheap, and get a load of that volupté 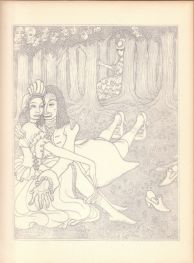 And a tiny little softcover edition from the 1920s, complete with woodcut illustrations and vignettes.  Did I mention that one of my Internet passwords is Pangloss?

I have a few editions of Candide with illustrations by Rockwell Kent – it was such a popular production that it was issued several times in different formats, but I had never even seen a copy of the Kent Moby Dick.  (I read that it was a big deal that Melville’s name wasn’t on the cover, as if you needed it!)  This Random House edition from 1930 is the first reissue of the Kent illustrated version, originally published in a very limited three-volume set.  (There is also a fancy gold and blue covered version of this book from 1933.)  Kent’s pictures are fantastic, but they are ink drawings, not woodcut prints, although they are almost always referred to as such. 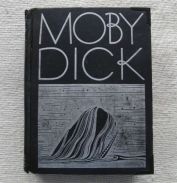 I like Barry Moser’s art work a lot, and I have a few trade editions of his books – Alice in Wonderland, Frankenstein – so I figured I should get a copy of his Moby Dick.  It’s often cited as a superlative example of book design and production, and the original letterpress edition goes for many thousands of dollars:  I settled for the hardcover University of California reprint.  I like it, but it just doesn’t excite me the way Rockwell Kent’s does.

And while I was on this Herman Melville theme, I read this book about the slave trade, by a local historian.  The facts of the trade are unspeakably appalling, a veritable holocaust that played out over centuries.  Even the language of the traders is similar to what we know of Nazi organizers of the death camps:  the main difference was that slaves were expected to reproduce, rather than simply work themselves to death.  One of the benefits of a pre-industrial age.

It’s a discussion of the Atlantic slave trade, using Melville’s novella, Benito Cereno, as unifying narrative device for the history.  Until I read this book, I had thought that Melville based his story on facts from the Amistad case, but actually, there really was a Captain Delano!  He was an ancestor of FDR, and quite a few other people as well, and he was involved in the slave trade himself, fine old New Englander that he was.  The story is based on his memoir which recounts in detail his encounter with the historical Don Benito.  I purchased this limited edition illustrated edition of Benito Cereno with woodcuts by Derrick Palmer, published by the Imprint Society.

The pictures below show Delano being rowed to the captive slave ship, and Babu’s head on a pike, after the truth has been revealed. 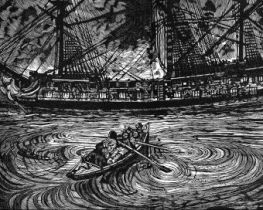 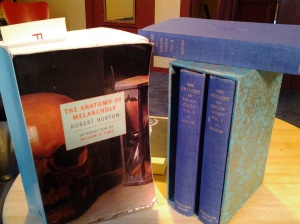 The NYRB edition of Robert Burton’s Anatomy of Melancholy is great, but let’s face it – it’s a pain to lug around!  It is certainly the best to read, because it retains the endless series of Latin quotations in the text while providing their translations right after each one, in brackets.  No need to constantly thumb to the notes to see what they mean, and with the English right there, sometimes they are fun to read.

It turns out that the text first appeared in the Everyman’s Library, revived recently, in a larger format.  So, I searched and found a copy of Burton’s work in the original three-volume edition from the 1930’s.  Ah!..much easier to handle.

The slipcase was made by me to hold them together – they are a bit delicate, and I will probably cover them in paper before I toss them into a backpack.  I have taken up the craft of making cases for my little treasures, such as my recently acquired Poe-Pym-Baudelaire illustrated edition.  It is not nearly as hard as I had feared to get a pretty decent result. 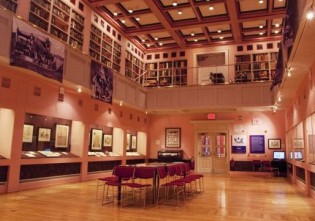 The Grolier Club in Manhattan is an old society of bibliophiles that occupies a remodeled townhouse in midtown.  I don’t know what their daily business is, but they put on some wonderful free exhibits, including one on Wunderkammers that closes soon.

These ‘rooms of wonder’ were the forerunners of our museums, particularly museums of natural history, and the exhibit documents their place in the Europe of the Enlightenment.  It also includes two color volumes from the catalog of Albertus Seba’s collection, perhaps the most magnificent such publication.  I have a copy of the one-volume Taschen full-size facsimile of the book, and it is a favorite of mine:  I never tire of paging through it.  The alligator below is from the facsimile; the original is on display at the Grolier.  Always wonderful to see the real thing. 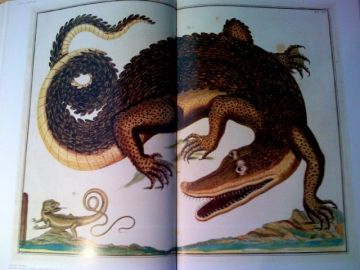 By chance, a second, upstairs exhibit began the day I was there, and it illustrated the history of microscopy, mostly with printed matter, but a few antique microscopes were also on display.  There was a beautiful copy of Robert Hooke’s seminal publication on display, opened to his most famous illustration, a large-scale drawing of a flea.  I have a copy of the book as a high quality Adobe PDF which has the advantage of letting me page through it in its entirety.  What a shock of recognition and revelation this book must have been to the fortunate few who read it in the 17th century!

The image above is of a late 15th century Spanish translation of Augustine’s The City of God that is exhibited in The Cloisters Museum in NY.  I was looking at it yesterday, my own copy of the book in hand.  The old edition is three massive volumes; the new one, a Penguin Classic, is a nice little brick of a volume, but still quite handy.  Data compression is not a new phenomenon.

It’s common now to come across the phrase “caution – spoilers ahead” in discussions of books and movies.  People want to avoid having their experience ruined  by reading a review that reveals the end, the surprise, the mystery, etc.  Personally, I don’t care.

Were people upset that they knew the ending of the Illiad when they heard it for the 100th time?  Everyone has favorite films or books that they see or read again and again.  The best works don’t depend on surprise.  That is, the suspense depends on the characters’ not knowing what’s ahead.  Some of them, Greek tragedies for example, assume that we already know the whole story.

I know it may be snobbish, but this is why I have no interest in reading mysteries – I can’t abide a book that depends for its appeal on hiding an aspect of the plot.  In a movie, it can be fun, and if it’s a good one, knowing the secret really doesn’t matter, but in a book, it’s just tedious for me.