In southwest France, dans le pays Cathar, lies the Canal du Midi, an engineering marvel of the 17th century built by Pierre Paul Riquet.  It was built in only fifteen years (no machines, of course) when Riquet was in his sixties, and despite the backing of Louis XIV and his minister, Colbert, many thought it would never be done.  The motivation was simple:  connect the Mediterranean to the Atlantic, and cut out the part of the sea route that requires sailing around the entire Iberian peninsula when shipping goods.  It starts near Narbonne on the sea, and moves roughly west to Toulouse, where it meets the Garonne Canal that was built earlier.  Once it was complete, it became a tremendously important link in the commercial network that was retired only with the coming of the railroads. 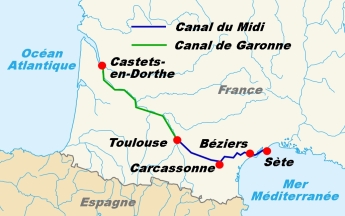 Canals often have to have locks to allow barges to negotiate the drops in elevation that can’t be avoided on route, and in the 1670s, the design of locks had approached what is used today.  What was unusual about the Canal du Midi was the that is followed a course with a pronounced peak along its course (see below) so that water in the channel would be flowing in two directions at once:  to the Mediterranean; and to the Atlantic.  That meant that there had to be a constant source of water at the summit, not an easy thing to supply in a region that is often parched in the summer.  This is why Riquet’s proposal met with such scepticism.

Riquet solved the problem by capturing the flow from the Montagne Noire, where there were several large streams that became torrents in the winter.  He built a large dam and created a huge reservoir at Naurouze that keeps the water flowing nicely all the year ’round.  If you’re into this sort of thing, you can learn all the details in From Sea to Sea by L.T. C.  Rolt.

Today the canal is just for leisure:  walking, biking, and exploring on boat and barge trips.  Here’s a picture of where we rented bikes, a picturesque spot in la France profonde (deep France).

There are places where it a stream crossed the route of the canal, so a pont canal, a canal bridge, was created to carry the water road over the water!  The images below show the canal from the level of the tow path, and on the right, from the stream.  If you look closely at the second picture, you can just make out a boat crossing the stream at the midpoint of the bridge.

Here’s a better view of a barge crossing the water bridge over the stream.  This one happens to have been built by Vauban, of fortification renown, after Riquet had died. 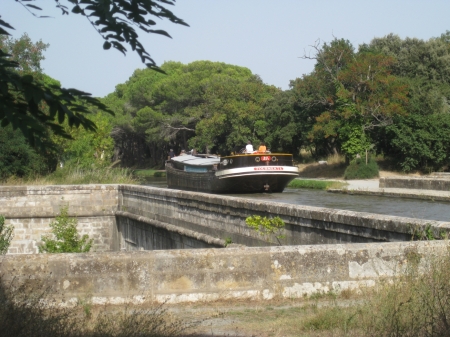 There are many lovely structures on the canal, including bridges like this one that, more conventionally, carry roads over the water.  When I was there, kids were doing backflips into the water off of it.