Breaking News:  The copyright claim on my video (via YouTube) has been lifted as a result of my protest.  You can view it with full audio.

At last, the long awaited world premier of my retelling of this biblical cult favorite! You can watch it on YouTube, and sing along at the end with Bob Dylan.

From the collection of Glenn Bray, on display at this Exhibition.

Wolverton wrote for the comics, for MAD Magazine, where most of his fans probably encountered him, and produced an amazing set of illustrations for the Bible published by the California church of which he was a member.  Looking at his images, it’s clear he was a formative influence on many artists in the undergound comix scene, Art Crumb, among them. (See the Snoid  after looking through Wolvertson’s stuff if you don’t believe me.) 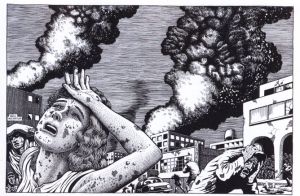 My latest obsession – the prints of Mr. James Gillray, father of the political cartoon. I recently saw an enormous exposition of his work at the New York Public Library, and I was entranced. I’ve never had the least interest in collecting anything, not since I was a boy collecting metal cars, but the sight of his prints started me on a long-term project. Unfortunately, original impressions of his engravings and etchings are rare and expensive, so I shall be able to purchase only those of lesser quality or later editions from the 1849 Bohn edition. Oh well…The one on the upper left is one of his ‘suppressed plates’, i.e., he never printed it, either because of government, publisher, or self-censorship. It is a jab at the king and his mistress, who was unpopular, and who was a rather petite woman compared to His Majesty. Gillray digs the knife in by ostensibly comparing their shoe sizes in this very funny and racy design that even Gary Hart might love. [Speaking of Mr. Hart, candidate manquee, my hat’s off to him for skewering David Brooks with his letter to the editors of the NYTimes in which he pointed out that Brooks, the new-age conservative, was ripping off a good idea of George McGovern’s, the bete noir of the right.]

Next, we have a print on a bizarre geometic theme, showing a sphere being projected onto a plane – a reference to some rumor of the day – and a conceit dear to my digital-cartographer’s heart. Then, France and Brittania kissing and making up, and finally, one of his many anti-Jacobin prints, decrying the execution of Louis XVI and deploring the Reign of Terror. He is wonderfully witty, tremendously inventive, higbrow and vulgar all at once. Hilarious! Exhilarating!

You can see a large image of the last three by clicking on the thumbnails, and you can find several websites that have a lot of his work on display, for sale or simply for show.