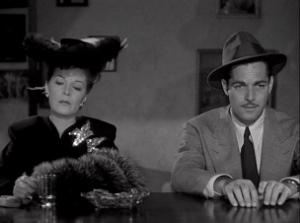 Another installment in my highlighting of engineers as characters in cinema:

Phantom Lady (1944), directed by  Robert Siodmak, doesn’t seem to be available anywhere but Youtube, so there I watched it, fortunately, on a large screen.  The image above shows the phantom lady with the male lead, Alan Curtis as Scott Henderson.  He’s just been dumped by his rich wife, who was also carrying on with his best friend.

His wife is found murdered, and Scott is fingered for the crime.  He is remarkably passive about it all, but he is saved by his chipper secretary, “Kansas”, played by Ella Raines.  (I read her voice was dubbed – couldn’t she do Kansas?)  The scene where he throws in the towel after losing his appeal is pure Expressionism. 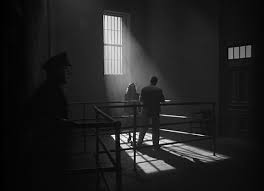 As noted, Kansas is of stronger stuff, and she tracks down everyone associated with the events of the fatal night, eventually finding the killer in a scene that surely inspired the finale of Jagged Edge many years later.  Would you mess with Kansas?  She has a remarkable clean, strong look to her.

The reliable Elisha Cook, Jr. came down from his Sierra hideaway to do his bit in the film as a hop-head drummer with the hots for Kansas, all tarted up to gain his confidence.  Her legs incite his drumming to an orgasmic crescendo, but she keeps her cool. 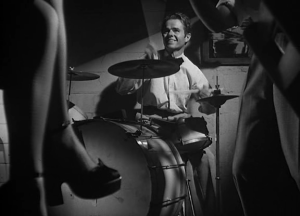 Scott Henderson is a civil engineer, with dreams of building cities, dreams that excite the love and admiration of Kansas.  (He’s too dull to notice her crush on him.)  He wants playgrounds and sunlight everywhere.  There we have the civil engineer as hero motif, still with some life in it in the 1940s.

Scott’s nemesis and friend, played by Franchot Tone, is an artist, an artist a bit too preoccupied with the power of his hands to create…and destroy.  In a moment of candor, he derides the ambitions of his friend as paltry concerns with sewers and pipes, and whatnot.

Engineer as nebbish:  a far cry from the protagonist of transatlantic tunnel. 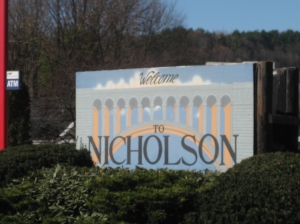 Quite a sight: an unexpected pleasure during my foray to rural Pennsylvania.  Brings to mind the Pont du Gard and NYC’s High Bridge Aqueduct. 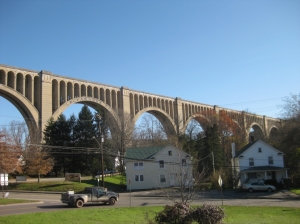 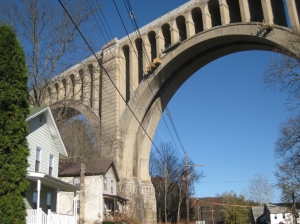 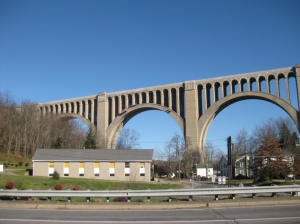 She ain’t no fairy!  Not with this on tap:

From a recent news item:

The Army Corps of Engineers is close to opening the key Morganza floodway to relieve pressure on the levees downstream that protect the more densely populated Baton Rouge and New Orleans areas. The Corps could make the move as early as this weekend, though officials stress that no final decision has been made.

Still, the governor has warned residents in the spillway’s path to assume they’ll have to leave their homes. With that threat looming, some 25,000 people in an area known for small farms, fish camps, crawfish and a drawling French dialect are hurriedly packing and worrying that their homes and way of life might soon be drowned.

At a meeting Thursday, Army Corps of Engineers Col. Ed Fleming warned a crowd at a volunteer fire station that where they were standing was projected to be swamped by up to 15 feet of water from Mississippi River flooding. The crowd let out a collective gasp.

“From the ground?” an incredulous resident shouted.

“From the ground,” replied Fleming, head of the corps’ New Orleans district.

Well, it’s sugar for sugar
And salt for salt
If you go down in the flood
It’s gonna be your own fault
Crash on the Levee – Bob Dylan
Other posts on the 2011 Mississippi flood:

W. C. Fields famously composed a humorous epitaph for himself:  “I’d rather be in Philadelphia.”  I found myself there this weekend, a beautiful, cold crisp Saturday of a murderous weekend.  I was in town for a family affair and I had a few free hours, so I decided to pay a visit to the art museum.  The huge temple front in the image above is the museum,  which I think is known to millions from the film, Rocky, which I have not seen.

The museum sits on the former site of the city water supply reservoir.  The buildings in the foreground are the Fairmont Waterworks that pumped fresh water from Schuylkill River (pronounced Skool-kill, I think) to the old reservoir, from which it flowed by gravity to the city.  Philadelphians of the early 19th century did not share Fields’ disdain for fresh water (I never drink water.  Fish fuck in it), and the waterworks was a much heralded addition to the city.  In fact, it became an international tourist attraction, which says something about the state of urban life in those days.  A large city with a steady supply of clean, fresh water!

Today, we tuck our essential, life-giving infrastructure out-of-the-way, in dull, nondescript, anonymous architecture.   The Fairmont works are housed in a glorious Palladian ensemble, and are backed by landscaped grounds and terraces that have recently been restored.  The views from the rock heights as you walk the cliff side promenades are fabulous.

An interesting technical note about the water works is that the pumps were originally powered by steam engines, but these were taken out of service, and replaced by water wheels.  In the 1850s, water turbines were introduced to power the pumps.   So often the progression goes in the opposite direction!

The city fathers were quite far-sighted about their water supply.  They knew that urban development could lead to the fouling of the Schuylkill, so they purchased large amounts of land to prevent the establishment of industrial facilities along the river.  These areas become Fairmount Park, one of the largest urban parks in the world.  Nevertheless, development did occur further upstream, and the inevitable industrial pollution and raw sewage found its way down to the water works, destroying the purity of the source.  Philadelphia suffered from a horrific cholera epidemic in the 1890s, and in the early 20th century, the works were decommissioned and water was taken from the river and fed into a sand filtration system.  A few years later, chlorination was introduced, and the cholera bug was beaten.

The waterworks fell into a dilapidated state.  When my wife was a girl, she took free art classes in the engine house which was used by the parks department.  When I visited the site many years ago – making a pilgrimage to a civil engineering landmark – it was derelict, but now it has been wonderfully restored.

After making my professional pilgrimage to the waterworks, I proceeded to the museum where I had a enough time to race through the corridors to the Duchamp room for a different sort of homage.