Burning in the City

Nearing on the end of Augustine’s The City of God, I continue to be entertained by Saint A’s withering sarcasm towards his ‘opponents,’ i.e., the pagans, and his dogmatic torturing of ‘rationality.’  One man’s rational is another man’s fanaticism.

In this later book, Number XXI, he is discussing the nature of eternal torment meted out to the sinners after the Second Coming, and dealing with difficult ‘scientific’ issues, e.g., how can a sinner’s body continue burning for eternity?  After all, would it not be consumed after a while?  Augustine uses a fascinating argument, what I call the argument from ignorance, which essentially states, “You [pagans] cannot explain everything we see in the world – we are all ignorant of things.  Therefore, you should not object to my assertion that God performs miracles.”  Doesn’t make a lot of sense, but then, it’s a line of reasoning heard today, as are so many things the Saint says.  Rick Santorum comes to mind often when I read him…

Here, the Saint makes an interesting point about the relative authority of texts:

But, as I said in the eighteenth book of this work, we are not obliged to believe everything contained in the historical records of the pagans, since their chroniclers…seem to be at pains to differ from one another …But we are free to believe, if we so choose, those reports which are not in conflict with the books which, as we have no doubt, we are obliged to believe.  XXI 6: Not all marvels are natural; many are devised by man’s ingenuity, many by the craft of demons:

Obviously, it’s all clear and simple which texts ‘we are obliged to believe.’  Following on, Augustine discusses many ‘marvels’ that are generally accepted as true, although they seem laughable to us.  So, he argues, if you accept them, you might as well believe me too.  Certainly, the miracles God performs are no more absurd than these ‘marvels.’  But, of course, he does believe in some of those marvels:  He’s not just being funny.

…My purpose here is to demonstrate the kind of marvels recorded in profusion in pagan literature, and generally believed by our opponents, although no rational explanation is offered, whereas the same people cannot bring themselves to believe us, even though rational grounds are produced, when we say that Almighty God is to perform an action which lies outside their experience and contravenes the evidences of the senses. … XXI 8:  The omnipotence of the Creator is the ground of belief in marvels

Marvelous things are abounding in the world, and, really, is a man rising from the dead so much more remarkable than some of the animals and natural wonders we come across?  At one point, he cites the numerous volcanoes in Italy, mountains that burn continuously without being consumed!  And, my goodness, Fire turns stones white, but turns wood black!  And charcoal, which is created when fire consumes wood, cannot itself be destroyed by fire or earth!  Thus, people put charcoal under stone property markers, knowing that it will never decay, so that if the stone markers are moved, they can prove the original location!  What a weird manner of pre-scientific reasoning…Fire destroys, so there must be something magical about charcoal which will not be further destroyed.

…For in any case, I have sufficiently argued that it is possible for a living creature to remain alive in the fire, being burnt without being consumed, feeling pain without incurring death; and this by means of a miracle of the omnipotent Creator.  Anyone who says that this is impossible for the Creator does not realize who is responsible for whatever marvels he finds in the whole of the world of nature.  It is, in fact, God himself who has created all that is wonderful in this world, the great miracles, and the minor marvels that I have mentioned…The nature of eternal punishment: XXI 10

The salamander was thought to have the ability to live in fire – that’s strong!- and so become the symbol of the French kings. Later, the amphibian was shown as a fire-breather. It shows up on several facades in New York City, most notably here on the Alwyn Court building, which is swarming with them. 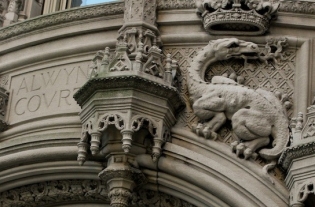 …I couldn’t stop myself.  I don’t like to make fun of well-meaning people, but sometimes…

This letter was in the New York Times today, or rather, in the Soviet equivalent in…1929?

Citizen Osterbrook knocks down the straw man of zero-emissions coal-fired power plants to prop up arguments for a path towards bourgeois endorsement of old, dirty, dangerous technology.

He is mistaken when he says that new energy needs cannot be met with clean energy sources alone. We must stand with our forward-thinking leader and comrade on this, and meet our new energy needs by commanding the technologies of the future.

Instead of perpetuating coal, let us instead become again that country that, when put to the test, built socialism in one country!

Wind and solar power can meet our new energy needs through technology available today. All we need is the political will to harness it. Naysayers like Mr. Osterbrook will leave us in the dustbin of history!