Oh,let it be the end!

I stopped reading Thomas  Friedman several years ago, but I couldn’t resist his latest column commemorating the departure of the last U.S. soldiers from Iraq.  He called it, The End, For Now.  Oh, would that it was the end of his scribbling!!

A few morsels to choke on:

I suppose this was the reason for the war:  just a big intellectual experiment.

Iraq was always a war of choice. As I never bought the argument that Saddam had nukes that had to be taken out, the decision to go to war stemmed, for me, from a different choice: Could we collaborate with the people of Iraq to change the political trajectory of this pivotal state in the heart of the Arab world and help tilt it and the region onto a democratizing track?

Is this the same guy who was jumping up and down shouting about WMDs in Iraq?  Perhaps he is drawing a fine distinction here:  “Oh, I said WMDs, but I never said “nukes“”

I say “no” because whatever happens in Iraq, even if it becomes Switzerland, we overpaid for it. And, for that, I have nothing but regrets. We overpaid in lives, in the wounded, in tarnished values, in dollars and in the lost focus on America’s development. Iraqis, of course, paid dearly as well.

Here, Tom follows the great American tradition of celebrating and mourning our losses, while those losses we caused to our ‘friends’ were so much larger:  2 million Vietnamese, half a million Iraqi civilians… of course, of course.

Al Qaeda wasn’t in Iraq until we offered them an invitation there by reducing the country to primitive chaos.  With people like Friedman, no need for real enemies:  we’ll create them as we go along.

…the most important product of the Iraq war: the first ever voluntary social contract between Sunnis, Kurds and Shiites for how to share power and resources in an Arab country and to govern themselves in a democratic fashion. America helped to midwife that contract in Iraq, and now every other Arab democracy movement is trying to replicate it — without an American midwife. You see how hard it is.

So, the ‘Arab Spring’ arose in imitation of our war in Iraq?  That jerry-rigged “democracy”, which may be falling to bits as I write, is what they were striving for?  We are truly a beacon to the future!

The best-case scenario for Iraq is that it will be another Russia — an imperfect, corrupt, oil democracy that still holds together long enough so that the real agent of change — a new generation, which takes nine months and 21 years to develop — comes of age in a much more open, pluralistic society. . . I don’t know if Iraq will make it. The odds are really long, but creating this opportunity was an important endeavor, and I have nothing but respect for the Americans, Brits and Iraqis who paid the price to make it possible.

Wow!  So that’s what it all comes down to?  An “important endeavor,” a few hundred thousand dead civilians, lots of dead and maimed soldiers of our own, untold havoc to our federal budget, a gaping hole in the credibility of our government, and, oh yes, a lot of respect from Mr. Tom.  Not to mention the very real possibility that it will all unravel completely in the very near future into the fulfillment of the fiasco that began it.

He kept us safe…

In many letters to editors, I have heard this sentiment expressed in defense of GWB’s miserable record as president:  “No terrorists have attacked us…he kept us safe.”  Well, 9/11 did occur when he was president.  Here is a small gallery of momentos of our safety with W.

Our fearless leader keeps cool, and keeps reading “My Pet Goat” as the attack plays out.  What decisiveness!

Our great leader was brilliant during the phony energy crisis manufactured by Enron (remember them?) that nearly bankrupted California. 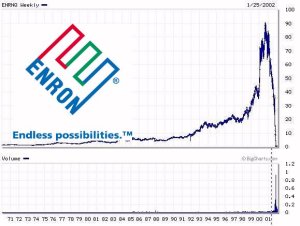 Once again, Numero Uno was on the ball when Katrina hit, and his valiant lieutenant, Brownie, did a “helluva job.”  Oh well, it was an act of God…

WMD?  WMD?  Did somebody say something about weapons of mass destruction..?  Well, he kept us all safe, right?

Well, Bush isn’t the only great leader and visionary we had to guide us these last years.  Now we see the results.  I bet he  and his friends kept their money really safe!

Yes, I am getting a bit tired of all this Bush-bashing.  Frank Rich’s column in the NYTimes today is a good example.  I agree with everything in it, but really, what’s the point?  Here’s the opening, emphasis added:

WE like our failed presidents to be Shakespearean, or at least large enough to inspire Oscar-worthy performances from magnificent tragedians like Frank Langella. So here, too, George W. Bush has let us down. Even the banality of evil is too grandiose a concept for 43. He is not a memorable villain so much as a sometimes affable second banana whom Josh Brolin and Will Ferrell can nail without breaking a sweat. He’s the reckless Yalie Tom Buchanan, not Gatsby. He is smaller than life.

Uh…I’m not sure I get the logic of that clever allusion to Hannah Arendt, but I”m sure Rich’s smart fans do.  Or think they do.  And his references to all of us leads to the old joke about the Lone Ranger and Tonto:  “What you mean “we” white-man?”  Behind it all, Rich is separating himself and reaping satisfaction with his “I told you so’s” heaped on the Republican right.

Well, if he is going to say “We like …,” he ought to face up to the unpleasant fact that we elected him.  Yes, even those of us who didn’t vote for him!  We live here.  We aren’t renouncing our citizenship.  It’s our country, our society, and it made a big mistake.  If you want to talk about our country in the collective, you have to own up to its failures, too.  It’s like being in a family – the sins of the wayward are, in some sense, your burden, if you are truly a family.

Intellectuals like to harbor the secret thought that if everyone were just smart enough to listen to them, the one’s who are really smart, everything would go fine, but it never works that way.  People are just too…well, let’s say it, dumb! (Or are they not dumb enough?)

Rich isn’t talking about all of us, he’s talking about himself and his friends.  I happen to agree with him completely, but those yahoos who supported Bush aren’t going away, and neither am I.  We’re just going to have to find a way to exist together.

Train wreck …as metaphor, from Wikipedia:

The term is sometimes used metaphorically to describe a disaster that is foreseeable but unavoidable.

I sing to you of the presidency of George W. Bush:

Let us chant together with Clio, History’s muse: