A relief in the apse of Narbonne Cathedral showing the mouth of Hell filled with damned souls.  To the right, a donkey pulls a cart with more unfortunates destined for the same.  The Virgin surmounts it all. 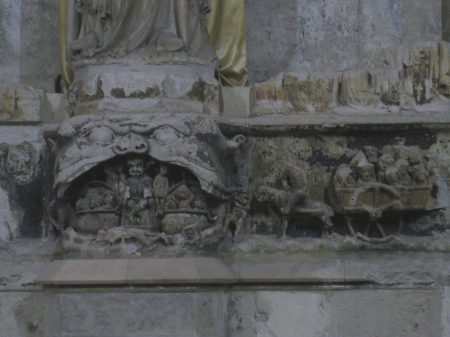 A storefront on a small street in Narbonne.  Not quite sure what the missing link between shopping and Darwin is, but clearly our view of mankind and its needs and ends has changed a bit. 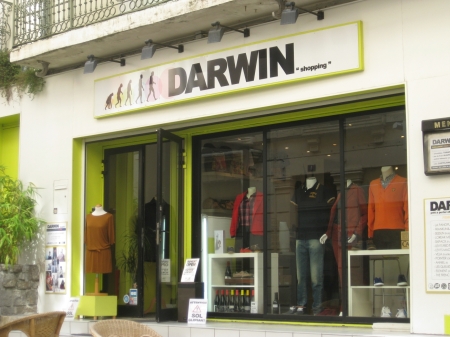 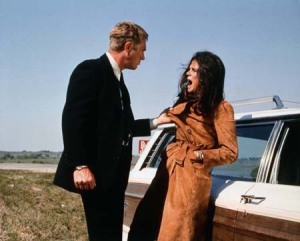 I enjoyed this movie a lot, but after reading Jim Thompson’s novel from which it is adapted, I can only say, “Whaa..?”  Well, movies and books, two different mediums, and no reason to expect one to be faithful to a story taken from the other.

Peckinpah’s film from 1972 keeps elements of the story and the characters, but transforms Doc McCoy and his wife Carol into 1960’s anti-heroes.  Doc’s borderline psycho nature is subsumed into McQueen’s super-cool persona, and his brutal string of murders, of criminals and innocents alike, are morphed into gutsy bravado and revenge against really bad characters.  The movie is a crime-action flick; the book is a descent into hell, not material for a blockbuster.

A common theme in Thompson’s books is male abuse of women.  And I mean abuse!  Rudy, the psychopath accomplice to Doc, hides out at a veterinarian’s house and forces the doctor to treat his gunshot wound.  Noticing the vet’s wife, he instantly, as do all these characters, recognizes a fellow traveller in corruption and degradation.  He initiates his sexual affair with her by knocking the wind out of her with a furious kick to the stomach.  Strangely, that element of the book is represented only by Doc McCoy viciously slapping his wife in a roadside encounter, although in the book, he never raises a hand against her.

Unlike the happy ending of the film, in which the loving couple get away with the money to Mexico after eluding the police with clever ruses, including a brief, compacted stay in a garbage truck, the book simply dives further and further down.  First, with a two-day claustrophobic stint of hiding in a partially submerged cave, then a few days inside a massive pile of steaming farm manure, and finally a dreamlike finale in hell itself.

Thompson doesn’t write ‘crime’ or ‘suspense’ novels.  He is a philosopher-poet of social and mental hell.  He’s also a great writer.  As Carol and Doc speed away at night, he tell us:

Silence closed over the car again. They raced through the headlight-tunneled night, and the black walls snapped shut behind them.  Time and space were the immediate moment.  Behind and beyond  it there was only darkness. 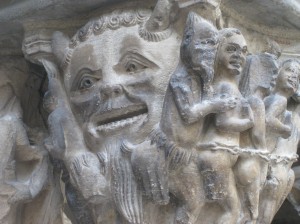 In keeping with my plan to visit the Metropolitan Museum once a month, I spent an hour at The Cloisters today.  This is the uptown branch of the Met that houses a large collection of medieval objects in a building resembling a monastery, and with multiple courtyards and interiors of European abbeys that were transported here and reconstructed.  It sits in the midst of a park on highlands overlooking the Hudson River Palisades and northeast Manhattan, and it is the only museum in Manhattan where I can drive up and park at the front door anytime I want.  The trip from my home takes about fifteen minutes.

I like to visit museums for short periods, or exhaustion sets in.  Since I can go often, I can look at a few things each time and leave the rest for later.  Some of favorites that I viewed today:

From the parking lot

Gold and silver – wildmen hold up the one on the left

Wildman – a symbol of virility?

Robert Campin, Merode Alterpiece – the picture as window is the central conceit of western painting from the late middle ages to the late 19th century.

A bishop seeks guideance from above.

The 3-D effect of the dark blue and black stained glass is wonderful.

Entombment, Florentine, similar to Lorenzo Monaco, a favorite of mine.

Back of a mirror or casket cover showing the attack on Love’s castle, a popular theme of the day. The defenders dump barrels of roses on the besiegers.

Remarkable ivory carving of a hunt. Note the dying deer on the right, attacked by man and dogs.

One of many cloisters at The Cloisters

Idealized Christian knight on a tomb

Romanesque floral ornament on a capital

Lively ornament; the damned in hell.

An acanthus capital – not what you think of as medieval!

The Hudson, the Palisades, and the George Washington Bridge to NJ

Old and new – what’s with that license plate? Death Trap!!

Inspiration for Kubrick’s finale to 2001?

All the world’s a stage 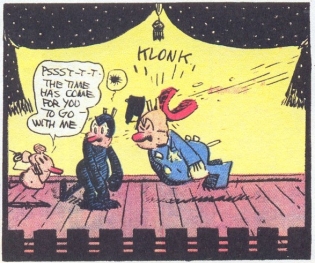 Ignatz fashions himself a boomerang brick and shows it to Officer Pup.  Ever mindful of Krazy’s welfare, Pup “get’s rid of it” by hurling it off a magic mesa.  From that point, or even before, we know what will happen, and here it is in the image above.

Somehow, without explanation or comprehensible mechanism, the scene has shifted.  This primal drama of love, longing, and anxiety is being played out…on a stage!  See the boards, the curtains drawn aside, the lamp?  And Ignatz, like the character in Bunuel’s Discreet Charm of the Bourgeoisie who suddenly realizes that the dinner party he is attending is in front of an audience, catches the situation and tries to apprise Krazy of it.  “Pssst…let’s go!”  Pup will suffer the dramatic consequences of the prologue, and they don’t want to be around for it.

As they make their escape, the theater seems to have disappeared, or is it always there?  May I paraphrase Marlowe’s Mephistopholes in his response to Faust, who asks him, “Tell me, where is this place that men call hell?”

The Stage hath no limits, nor is circumscrib’d one self place; for where we are is our stage, and where this stage is, there must we ever be.