1940, and in color, Fritz Lang takes on The Western, in The Return of Frank James.  What do you get when the master of M and Metropolis goes west?  A pretty good show, with Henry Fonda being particularly fine.

Lang plays it straight with the genre – how could he do otherwise then?  But at times, he seems to be slipping in some playful self-referential material.  Frank James is the brother of Jesse James, the famous outlaw gunned down by the Ford brothers, supposedly in a cowardly manner in return for their pardons.  When Frank hears they are off the hook for the killing, he vows to get them.

Frank concocts a bit of theater to make it easier to spring a trap on the Fords.  He checks into a fancy hotel and spreads the story by way of his young sidekick that Frank James was actually shot dead in a gunfight in Mexico.  Nobody knows their faces, so the ruse is quite successful.  It attracts the interest of a young, ambitious female reporter, Eleanor, played by Gene Tierney in her first starring role, who is completely taken by the tale.  In the shot below, Clem acts out his “eye witness” account of Frank’s “heroic” death for the benefit of Eleanor and Frank.  He seems to be spoofing the western genre itself as he does so.

Seems that the Fords are making hay out of their killing of Jesse, reenacting it in another bit of theater.  Frank goes in to take a look at the show, Earlier in the film, there is a bit of dialog in which Frank relates another theatrical experience of his, seeing a great performance by an actor named Booth.   Frank sits in a box  above the stage, but he doesn’t kill anyone at the show, unlike John Wilkes.  When Ford recognizes him from the stage, and hurls a lamp at him, Frank, like John Wilkes Booth, leaps from his box onto the stage, but he doesn’t break his arm…

Eventually, Frank turns himself in to prevent his farmhand “darky,” innocent of any crime, from being hanged for taking part in one of Frank’s robberies.  The subsequent trial is filled with Civil War politics that results in Frank’s acquittal.  I wonder what Fritz made of it all.

Say, what was the name of that theater, Mrs. Lincoln..? 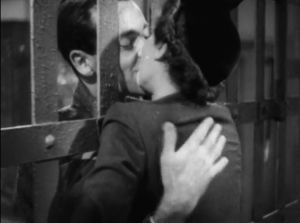 Is not each one us a society’s child?  Society made Eddie a killer, and then crucified him for it.

You Only Live Once (1937) is the second film by Fritz Lang after he came to America, and a pretty bleak job it is.  Yes, I’d call it early noir, but it is also drenched with religious imagery.  Henry Fonda plays Eddie Taylor (E. T. – that’s important in the film) and Sylvia Sydney looks gorgeous playing his faithful, too faithful, wife, Jo.  He’s a good guy who’s gone wrong, and paid for it.  Now, he wants to go straight, Jo waited for him during his three-year stretch in the joint, but society won’t give an ex-con a break. They’re doomed, and you know it.

Jo’s friend is a good-hearted lawyer who gets Eddie a job as a trucker when he’s freed, and he also carries a torch for Jo.  In the film, he seems to be a direct mouthpiece for Lang’s views, sometimes lambasting the authorities for their brutishness and prejudice.  He hopes for the best for Jo, when she and Eddie tie the knot on his release.

Eddie is a romantic, and of course that will screw him up good, but first he and she have a delightful honeymoon at a cozy motel, which has a lovely garden. 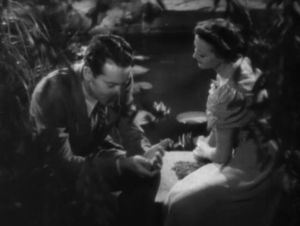 The lovebirds are watched over by two frogs who don’t appear to be mating themselves.  At one point in the story, when Jo believes Eddie is on his way to the chair for a crime he did not commit, she sends him a message – “I still remember the frogs.”  Only Fritz!

Those impassive guardians of the night watch as Eddie picks her up, kisses her, and mounts the steps to Calvary…oops, I mean their bedroom.  It’s a foreshadowing of the final sequence when he carries Jo through the woods, both of them riddled with bullets, to their final rest.  Pietas come to mind, as well as the finale of Farewell to Arms.

Eddie is late on a truck run because he makes a detour to take Jo to look at a house, a real fixer-up-er, that he and Jo can live in now that they are married.  Naturally, his boss is not understanding, and he humiliates him with insults when he begs for another chance, telling the boss that his friends tempt him with easy money from safe bank heists, but he wants no more of that. No dice – the boss fires him, after forcing him to wait while he has trivial phone conversations with his wife about social arrangements.  “Straight society sucks,” is the message.  Eddie delivers a knock-out blow to the boss’ chin and says, “And I wanted to go straight!…”

That scene is the set-up for one of the most outrageous plots twists I can remember, at least of those that work!  Eddie appears to have caved in, returned to the life of crime because society just won’t give him a break.  Once a con, always a con…  He’s arrested for a deadly bank job in which six men died from poison gas used to incapacitate the armored car guards.  His hat, with his initials, was found on the scene, and was used to identify him since the robber wore a full gas mask.  He is sent up, and sentenced to die.

Jo believes in him, and she carries a heavy load because she urged Eddie to turn himself in, believing he would get off with a fair trial. We figure she is just taken in by Eddie’s lies because she loves him:  so taken by love, that she agrees to smuggle in a gun to him. The plot is foiled by a crude metal detector, but the good Father takes the blame to get Jo off the hook.  He takes her aside and chides her:  that arch looks like it’s ready to crush them with its institutional weight.

We too are taken in, but by Lang’s audacious plot twist that makes us complicit in society’s unfair pre-judgement.  Until it’s too late, we believe Eddie did it.  By then, Eddie, caged like an animal for slaughter, has lost all ability to judge the odds, let alone right and wrong. 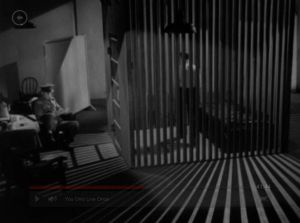 With the aid of a friendly con, he makes a daring escape, using the fog and the all-too-bourgeois prison doctor as a shield. 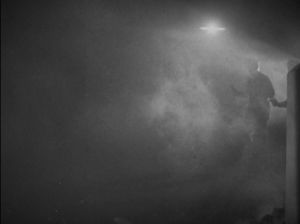 Eddie reunites with Jo, who, this time, won’t urge him to turn himself in, not when she learns he shot Father Dolan on the way out.  She figures she’s as guilty as he is because it was she who urged him to surrender in the first place, when he wasn’t guilty! They run for it, like those Gun Crazy kids, like Bonnie and Clyde, and even, maybe, like the Joads in The Grapes of Wrath.

They have a brief rest, before journey’s end.  Idyllic…

Eddie knows they’re doomed.  How could it be otherwise?  He’s serene, and she loves him.  They’ll go together.

They hit a roadblock, take some heavy fire from Tommy guns, and crash.  Eddie stumbles into the woods, carrying Jo in his arms.  The trooper lines up his gun with the two in his sights…  Is it just me, or is that not the cross I see there, completed by Eddie?  He is the sacrificial lamb for our social sins.

Jo, dying, tells him she wouldn’t have had it any other way.

He knows what he must do.  He must kiss her dead lips, and then he will be free. 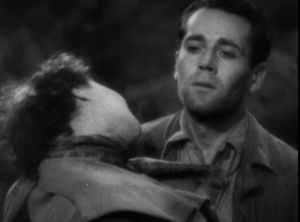 He sees the gates to freedom opening before him, and he hears the voice of Father Dolan repeating what he said during the breakout, when Eddie shot him – “You’re free!  The gates are open!”

The title of this post is a reference, of course, to Society’s Child, a hit song from 1965 written by Janis Ian when she was fourteen (!!) and performed live on TV when she was sixteen.  It’s the story of a white girl in love with a black boy, forced to break off with him because of her parents’ disapproval and peer pressure.  She knows it’s all wrong but what can she do? She’s just society’s child.