White Heat (1949), a gangster film starring James Cagney, gave us the ‘iconic’ finale of Jarrett shouting to his dead mother, “Made it Ma! Top of the world!” from inside a refinery about to explode.  Va va va voom! and he’s gone in a glowing plume of flame. Jarrett is a homicidal maniac prone to crippling headaches, and he has a too-strong attachment to his murderous demon of a mom. A volatile combination.

The plot of the film is pretty dull, involving Fallon (Edmund O’Brien) as an undercover cop who gets close to Jarrett in prison to try to learn the identity of the currency fence who launders Jarrett’s loot. Fallon is too cool, too efficient, and dull, but Cagney and his co-star Virginia Mayo as his wife, Verne, keep the movie crackling. According to Wikipedia, it was said that she “looked like a pin-up painting come to life,” and she plays it for all it’s worth in this flick.

The film has many scenes that are classic sequences, including the mess hall bit when Cody passes word along the tables that he wants to hear how his mother is doing on the outside.  When word is returned that she is dead, he goes wild, flailing away at the guards who try to restrain him until he is carried out horizontally, bawling like a little boy. 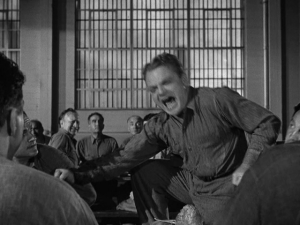 Earlier, while hiding out from the cops in a drive-in movie theater, Verne, Ma, and Cody share the front seat of their sedan, with Ma in the middle in more ways than one.  The kisses that Cody gives his wife and the ones he gives his mother aren’t all that different. He seems to have more feeling for Ma, and not much heat when it comes to his luscious wife.

Cody hatches a plan to ‘confess’ to a lesser crime in another state, and do a short stretch in stir to get the heat off him for a massive and bloody heist he has just committed.  This gives Verne some ideas about making the separation permanent.

As these thoughts move through Verne’s head, the WWII movie reels on, and we get a  prefiguration of Cody’s destiny.  Could that torpedo have other significance as well? 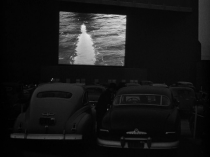 While Jarrett’s away, Verne and Big Ed get to spend more time together.  Big Ed has a lot of moxie, but his plans to get Cody bumped off in jail don’t pan out.  Instead, Cody breaks out and is headed back to the gang, with some scores to settle.  Verne is all for fleeing, but Big Ed wants to stand and face down Cody.  To keep Verne around, and who wouldn’t want to keep her?, he threatens to tell Cody how his ma died, shot, in the back, by Verne.  Yep, they’ll face Cody together…

Well, things don’t go so well for Big Ed, and Verne and Cody are back together.  Maybe there is some chemistry between them after all?

Fallon rigs Cody’s car with a tracking device, a primitive GPS setup, to foil his last heist.  I always enjoy the use of maps in these old movies, shown here as the cops demonstrate their newfangled toys for following Jarrett’s car remotely.

Fallon is still undercover with the gang, right up to the end when he’s found out after the heist goes bad.  Cody wants to use him as a hostage to get out, but Fallon tells him the obvious, it won’t work.  With the gang armed, dangerous, but surrounded, Verne shows up to try to make a deal with the cops, claiming that she can coax Jarrett to give up.  No deal – her charms fall flat on the copper.

The last gang member tries to give up, but Cody shoots him down in cold blood.  No deals for anyone!

Those tanks are ready to blow! 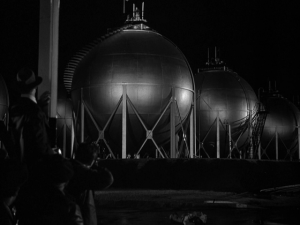