The exhibit of paintings by Sakai Hōitsu, Korin, the earlier master who inspired him, and his student,  Suzuki Kiitsu, ends tomorrow at the Japan Society.  I caught it the other day, and saw a related exhibit, also on the Rimpa style, at the Met earlier this summer.

It’s not easy to isolate the elements of the Rimpa style, other than to say it is deeply involved with nature, uses highly stylized and abstract patterns, and is very sumptuous and beautiful, employing expensive materials such as gold and silver leaf.  In fact, one blurb I read said that the style has become practically synonymous with Japanese art, so deeply embedded is its aesthetic approach in the nation’s culture.  On the other hand, as the exhibit points out,  Hōitsu began his career working in the style of Ukiyo, a popular form that focused on the ‘Floating World’ of Japanese urban pleasure districts, well known to us through wood block prints.

The images below are of a dragon rising before the faint, abstract, silhouette of Mount Fuji, by the student, Suzuki Kiitsu. The images hardly do justice (click to enlarge them) to the wet on wet technique that creates the swirling dark cloud emanating from the skin of the dragon. 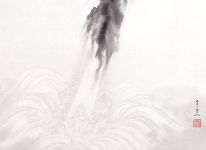 The Japan Society of New York is showing a wonderful collection of popular woodblock prints from the mid-19th century.  The subjects range from myth, to history, to pretty women in daily life, and it is easy to see why the artist, Utagawa Kuniyoshi, is considered a major influence on contemporary Japanese manga, or comics.  A great show!

As I posted earlier, I have been venturing into Japanese flower arranging.  The pull of the Japanese minimalist aesthetic is very powerful for me, and I was first introduced to it in college when I took a survey course on Japanese art.  I have thought about it a lot, and I decided to write my professor a thank-you note about it – thirty years late.  It took a bit of doing to locate her – her name has changed – and in searching, I came across a talk she gave about this famous print by Hokusai, “The Great Wave.”  [Complete talk  here:  Totebags, Teeshirts, and Tableware: The Domestication of Hokusai’s Great Wave.]

In her talk, she addresses issues of the commercialization of art, mass reproduction of images and commoditization for the consumer economy, cultural appropriation of icons, and the history of japonisme in Western art.  The latter has been known for a century among art scholars as an important influence on Art Nouveau, Impressionism, and other trends, but it was brought to the fore in the public mind with one of Thomas Hoving’s first “blockbuster” exhibits at the Metropolitan Museum of Art in New York.

Among the ironies Professor Guth points out is that in Japan in the 1970s, Hokusai, and the Ukiyo-e genre in which he worked, was not exactly a universally lauded high point of Japanese culture.  Indeed, he was considered a practioner of a rather disreputable art form, and not a member of the high-art pantheon, not the least  because he worked in woodblock prints, a medium intended for popular mass consumption.  Ukiyo-e, the floating world, is the culture of the pleasure district, if not the red light district, and one of his more kinky essays in that direction is shown here:

Imagine this on display in a high-profile exhibit of loan works from Japan during its heyday as the International Bogeyman of the American economy!

Guth takes a broad minded view of the inevitable mixing of art and commerce, tracing the ways in which museums aided the transformation of The Great Wave into one of the most recognizable images of Japanese art today.  She dismisses the attitude of one critic whom she quotes early on as saying that museums must hold the line between art and mass-consumption, accepting the situation of today.  After all, anytime you put a person in front of art, you never know what kind of experience they will have.  An opposing view, whether from the right or the left of the political spectrum, decries the degeneration of cultural capital in favor of profit, spectacle, kitsch…etc., sharing a remarkably similar lack of confidence in the power of ordinary people to evolve imaginative responses of their own to art works.

I became aware of the ubiquity (highlighted at this blog) of the Hokusai print myself when I noticed the logo of a clothing line with which my son was obsessed during his skateboarding phase.  I don’t think I have seen another example of the appropriation of the image through such abstraction.