I like to read things I disagree with – keeps me sharp.  Besides, if I’m going to condemn something, a movie, a book, a philosophy, I prefer to have dealt with the original.  Thus, I began this doorstop of a novel.  I’ve read short pieces by Ayn Rand, and found them lacking.  Fifty pages or so into this one, I had to stop.  The book is without any literary merit whatsoever.  Even that commie turned red baiter, Whittaker Chambers, reviewing it on publication said that to call it a novel was to “demean the term.”  Hey, he was right about Alger Hiss, too!

The one book that this writing reminds me of very strongly is What is To Be Done?  That too is without literary merit.  Ironic, isn’t it?  A book of right-wing libertarian cliches is the literary twin of the bible of the early Russian revolutionaries.  Both have characters of phantastic nobility, character, discipline and resolve.  Both are …

Well, read it if you can.

Obama: Back to School! 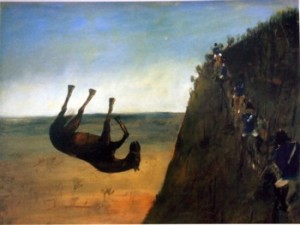 Is that a Democrat donkey falling off that cliff, I wonder?

Many of us have had a dream in which we find ourselves back in school – why are we there? We got out years ago, have a job –  we’re married! What’s going on?!   I wonder if President Obama has that dream, but he belongs back in school!

Asked why he continued to talk with Republicans who hold to the most extreme positions possible – Starve the beast!  Privatize social security! Cut Medicare! No New Revenue (Taxes)! – and perhaps most disturbing – Default? What me worry? I read the Federalist Papers! – Obama replied, “Because someone has to show that they’re serious about this!” That sounds like the frustrated and clueless plea of a novice teacher faced with a class of violently disobedient children.

His way of showing his seriousness is to bend over backwards to offer an agreement that sells out the party and the people who worked to elect him, that tears down the great social accomplishments of the modern American state, and that contains virtually nothing in return. “Balance” is the word of the day. We’ll cut entitlements and spending, if you will mention, uh…think about…uh, maybe, pretty please, sort of promise to close tax loopholes for corporations and raise the rates on the richest 1% of citizens. To the Tea Party contingent, taxing the mega-rich is a “Tax on the American People.” To paraphrase Tonto, “What you mean ‘we’ rich man?”

Obama seems blindly committed to his post-partisanship agenda, but how does that work when the other party is committed to the destruction of everything your party stands for? Do you just say, “Let’s talk about it some more.” That works in a college seminar, which is where Obama seems to think he is standing, but when he wakes up, if ever, he will see that he is in the elected office of the presidency.