Children of The Grid

Manhattan is a grid of streets, and the pretentious provincialism of its chauvinistic inhabitants has been ridiculed, lovingly by many, most famously by Saul Steinberg.  I encounter the grid tribesmen occasionally, I mean those who see themselves as such, or at least a segment of that population:  white,  professional, more or less liberal.  (In Europe, perhaps they would be called bourgeois.)  Their company makes me uneasy – I feel as if I’m struggling for breath in an airless room if I’m with more than two at a time.  Bunuel makes me laugh at it.

It’s the suffocating atmosphere of caste.  I guess I am with Groucho Marx who quipped that he didn’t want to join any club that would have him as a member.   I have a bit of envy of people who can so strongly link themselves to a place and a scene, like a barnacle that’s found a home, but I also find it upleasantly restrictive. Nostalgia is not an emotion I feel very much.

It’s all very personal:  When I meet people like this, I sometimes feel as if they are checking me out unconsciously and automatically, seeking to determine if I know the secret handshake or eye movment that signifies that I am of the tribe.   Intelligent?  Went to a “good” school?  Lives in what neighborhood..?  Politics okay, check!”   “Oh hell, just tell me what you think, if you think!”

I guess I’m a wee bit oversensitive, but you see, I come from the antipodes of The Grid.  I am from The Valley. 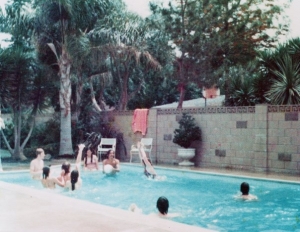 These photos are from a high school classmate, c. 1975.  That decor, those colors, that landscape, the plush pointless comfortable mentality of it all…how I loathed it.  To move east to attend a university was my dream and my escape.  Those were the thoughts of a silly teenager – it was hardly hell on earth.  And as I learned, the urban sophisticates of the east could be equally boring and trivial, not to mention pretentious.

Here in America, the ‘C’ word is taboo: CLASS! We have no ruling class, and we have no classes, except for the middle-class, which includes just about everyone except for Bill Gates and the few homeless people still left. This fuzzy way of thinking about society obscures the facts, and is partly an example of what right-wing Republicans like to use to explain why working-poor people will vote for a party that advances policies that are really in the interest of a tiny, wealthy minority: voting their “aspirations.” Well, here’s to hope!

Now, I’m not arguing for a Marxist concept of rulers-proletarians and all that, but the fact is, every society of any complexity has a ruling elite, and whether or not they constitute a social class, well that’s a knotty problem for sociologists to argue over. Was the Soviet upper crust a “class” rather than a ruling clique? Maybe, but here in the USA, we have what looks like a pretty tried and true ruling class.

Having a ruling class does have its advantages. After all, somebody has to run things, or at least provide cultural continuity.  (Some call this ideology).  I am more concerned with whether the ruling elite are “sensible”, open to some change, and comprise factions, of which one might be a liberal, compromising group. That way, the ruling class can allow new members once in a while, change with the times, give up privilege at times, and generally allow society to evolve instead of lurching along with violent rebellions when people get fed up with being treated like cattle. I guess that’s the Edmund Burke concept of a ruling class. So even though things can be relatively democractic, there is still a group in charge, if only because they have so much money, time on their hands to do all the politicking, they all know each other, and they’ve been running things for a long time. (A few hundred familes in the USA control more than 40% of the national wealth.) Because, as everyone knows, the easiest and most common way to be a member of this class is to be born into it.

American’s notions of middle class are woefully at odds with the facts now, and in the past. We all think about ancient society as being structured like a pyramid: pharaoh on top, then some priests and scribes, and then a lot of poor jerks who do the heavy lifting of schlepping stones, tending fields, herding goats and the like.  Most people are way below the pinnacle, which includes only a tiny population of the privileged ruling elite.

A more recent incarnation of the social pyramid is the way it’s used to describe feudal society, or the ancien regime before the French Revolution: King at top; some nobles and priests; then the peasant mass. Enter the middle class – the thrifty shopkeepers, tradesmen, and craftsmen, merchant princes etc. who occupy the sliver of society between the king/noble/priests and the peasant mass. They were called the middle class because they were in the middle between those two groups, but they too were a tiny portion of society. Nowadays, we have a bizarre notion of that class.

Today, in America at least, we have the bell-curve view of social structure. We have the ruling elite way off at the right hand side of the income distribution curve, and we have the really miserably poor way down on the left, but most people are in the middle, the middle class! The basic error is to associate the term middle-class with the notion of “average” or “typical”. Thus, the fat center of the bell-curve is seen by many as the habitat of the American middle-class. I would argue that our society is still pretty much the pyramid as in ancient days: we have the ruling elite, however democratically constrained they may be; and we have the poor and the working poor, and the working-class (which no one thinks exists anymore because all of its members are now, or think they are middle-class); then we have the real middle class, just where it always is, a thin sliver of privilege in between the elite and the rest of the mass.

Instead of looking at a bell-curve distribution, we should look at a cumulative distribution curve, which would look something like the one above. The bottom axis is income, lowest to the left, highest to the right. Almost nobody has an income of zero, so that’s where the graph starts. About half way up the left hand axis, percent of USA population, we have a pretty low income, about $45,000 for a family of four. Half of the households have a lower income, half have a higher one. Way off at the right, we see a household income of $200,000; about 95% of the households in America make less than that. And waaaay off to the right, off the chart, are the super high incomes, including Bill Gates, and nearly everyone makes less than that! These numbers are rough, but the distribution curve is true. And the middle class is right where it always has been; a sliver off to the right of nearly everyone else on the income curve, but to the left, lower than, the really rich people in the society.

American middle-class people don’t like this notion because they protest that “we’re not rich!” And they are not, compared to the upper crust, but compared to the rest of the USA? the rest of the world? definitely! The median income for a household in the USA (3.5 people) is about $45,000, so a lawyer, accountant, engineer, etc. even if married with child is going to be well above that level most likely soon, if not right out of school. So that’s more money than half of the rest of the USA – and how is that other half living?! Well, wealth is all relative to something, right? People feel poor just because they can’t jet to Europe whenever the urge takes them, and then complain about people living ‘well’ on welfare. I’d like to see them try it.

So, middle-class America, the real one, I mean, the professionals, the white collar drones and entrepreneurs making $50K, $70K, $100K a year or more for your household – all you dual income familes with gross annual incomes over $120K a year, stop your complaining! You may not be in the ruling elite, but you have a pretty cushy existence. Would you like to be below the median? And all you folks who aspire to a “middle-class” lifestyle on a barely or lower-than-middle-class income and educational level- stop fooling yourselves. You’re on the bottom of the food chain so you should vote and think accordingly.