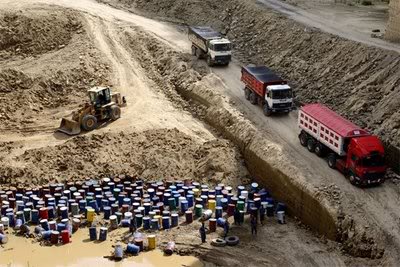 Gomorrah (2008), a film by Matteo Garrone, is based on a journalistic account of crime families in the Naples region of Italy, by Roberto Saviano, who is certainly a very brave man, and whom Berlusconi denounced as unpatriotic.  It follows five stories of people whose lives, as are all lives in the region…in Italy? are touched by the mob:  two stupid young kids who dream of big time success as mobsters, and fancy themselves the new Scarfaces of Naples; a master tailor working in the illegal knock-off industry that produces counterfeit haute couture gowns; a young kid who wants to find his future with the local gang while a turf war rages; a mousey accountant who handles payouts and who finds himself in the middle of the same war and wants no part of it;  and a young college graduate who gets a job in the waste disposal business.

The film uses non-professional actors and is produced in a neo-realist, or vérité style:  it is profoundly disturbing.  I suggest it as a pendant to Mafioso for those in thrall to the Coppola-Scorsese melodrama view of the mafia.  Scorsese ‘presents’ this film, and I’m sure he thinks Goodfellas is similarly hard hitting, but in Gomorrah, an MTV soundtrack is notably absent.  For those with a special interest in waste, American or Italian style, this film is informative.  The northern industries send their toxic waste to the south, where it poisons the land.  The managers look the other way, assured that the disposal is clean,as the Americans say.  The price is irresistible.

The action takes place mostly in a neighborhood with architecture that looks like something out of the futurist dreams of Antonio St. Elia. 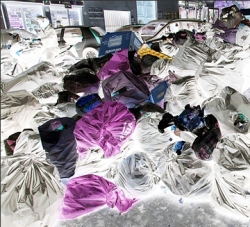 What a horror! Mountains of garbage, frightful stench, and rats of a size I don’t even want to imagine. The terrible spectacle of a great, ancient center of culture being buried in crime, corruption both social and physical, and raw garbage. Will they ever dig themselves out of the hole they are in? Modern civilization depends on the efficient disposal of our wastes, both solid and liquid (via sewers) and the system is broken in Naples, Italy. For years, it was “out of sight, out of mind,” but no longer!

This brings to mind a story by the late, great Italo Calvino, who surely would have appreciated the terrible historical and moral lessons provided by this horrific situation. The story of which I am thinking comes from his book, Invisible Cities, a series of vignettes, alluding to Marco Polo’s Travels, about imaginary cities described by a visitor to the court of the Great Khan. Each one has fantastic qualities that only Calvino could come up with, described with irony, wit, humor, and deep humanity.

In “Leonia”, he tells of a city in which all consumer items are used only once, and then discarded! Everything – sheets, dishes, toothbrushes, furniture – people are surrounded only by the new. The old is carted away daily by the quiet uncomplaining heroes of the city, the municipal garbage men. But all is not well in Leonia, surrounded by mountain ranges of rubbish:

The greater its height grows, the more the danger of a landslide looms…

Here is the entire text of the story:

The city of Leonia refashions itself every day: every morning the people wake between fresh sheets, wash with just-unwrapped cakes of soap, wear brand-new clothing, take from the latest model refrigerator still unopened tins, listening to the last-minute jingles from the most up-to-date radio.On the sidewalks, encased in spotless plastic bags, the remains of yesterday’s Leonia await the garbage truck. Not only squeezed tubes of toothpaste, blown-out light bulbs, newspapers, containers, wrappings, but also boilers, encyclopedias, pianos, porcelain dinner services. It is not so much by the things that each day are manufactured, sold, bought that you can measure Leonia’s opulence, but rather by the things that each day are thrown out to make room for the new. So you begin to wonder if Leonia’s true passion is really, as they say, the enjoyment of new and different things, and not, instead, the joy of expelling, discarding, cleansing itself of a recurrent impurity. The fact is that the street cleaners are welcomed like angels, and their task of removing the residue of yesterday’s existence is surrounded by a respectful silence, like a ritual that inspires devotion, perhaps only because once things have been cast off nobody wants to have to think about them further.

Nobody wonders where, each day, they carry their load of refuse. Outside the city, surely; but each year the city expands, and the street cleaners have to fall farther back. The bulk of the outflow increases and the piles rise higher, become stratified, extend over a wider perimeter. Besides, the more Leonia’s talent for making new materials excels, the more the rubbish improves in quality, resists time, the elements, fermentations, combustions. A fortress of indestructible leftovers surrounds Leonia, dominating it on every side, like a chain of mountains.

This is the result: the more Leonia expels goods, the more it accumulates them; the scales of its past are soldered into a cuirass that cannot be removed. As the city is renewed each day, it preserves all of itself in its only definitive form: yesterday’s sweepings piled up on the sweeping of the day before yesterday and of all its days and years and decades.

Leonia’s rubbish little by little would invade the world, if, from beyond the final crest of its boundless rubbish heap, the street cleaners of other cities were not pressing, also pushing mountains of refuse in front of themselves. Perhaps the whole world, beyond Leonia’s boundaries, is covered by craters of rubbish, each surrounding a metropolis in constant eruption. The boundaries between the alien, hostile cities are infected ramparts where the detritus of both support each other, overlap, mingle.

The greater its height grows, the more the danger of a landslide looms: a tin can, an old tire, an unraveled wine flask, if it rolls toward Leonia, is enough to bring with it an avalanche of unmated shoes, calendars of bygone years, withered flowers, submerging the city in its own past, which it had tried in vain to reject, mingling with the past of the neighboring cities, finally clean. A cataclysm will flatten the sordid mountain range, canceling every trace of the metropolis always dressed in new clothes. In nearby cities they are all ready, waiting with bulldozers to flatten the terrain, to push into the new territory, expand, and drive the new street cleaners still farther out.