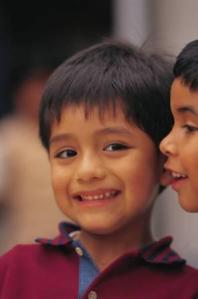 During my vacation, I am taking an intensive class in beginning Spanish, so I have the language-thing on my mind a lot.  George Orwell spend a lot of time thinking about language too, and his essay, Politics and the English Language is a milestone in the desconstruction of deliberate mis-communication.   Along with many other things from his magnum opus, 1984, the word, Newspeak, has entered our English lexicon as a term for politically motivated distortion of the language.

Newspeak was the language of Ingsoc, the ruling party in the society of 1984.  In a candid moment, its developers state that the purpose of the new language is to make it impossible to think independently.  Language is reduced to a mechanical tool to convey information, with shades of meaning rubbed out.  Not good, better, best, wonderful, etc, but good, plus-good, double-plus good, and triple-plus good.   The instrument of this linguistic assault on truth and independent thought was the Ingsoc dictionary of Newspeak.   Ingsoc lexicographers looked forward to a day when Oldspeak would be forgotten, and children would grow up with Newspeak, knowing, and thinking, nothing else.  The power of Ingsoc would then be unshakeable.

I believe that Orwell had his tongue firmly in his cheek when he wrote this.  Can’t you imagine him gleefully writing an entire appendix to his novel, spinning out all his ideas to their logical and absurd conclusion?  We forget that there are elements of deep, deep black humor in 1984, and that it is in some respects a satire.

Steven Pinker, a linguist who studies and writes about language, dissected this idea and dismissed it.  He argued that thought precedes language, at least much of the time.  As a consequence, there would be no way for Newspeak to prevent new languages and words from developing, which could, in turn become subersive and intellectually critical slang, jargon, argot, etc. etc.  Just get a few 1985 kids together, and they’ll start inventing new words, if only for insults!

[An interesting aside on this theme is F. Scott Fitzgerald’s often cited phrase that the mark of genius is the ability to hold two opposed ideas in the mind at the same time, and still retain the ability to function.   This is from his novel The Crackup.  Did he mean it, or was he being ironic?  I haven’t read the book, so I don’t know, but people often cite it as though he was being straight.  And then we have Orwell’s O’Brien, who says that you must accept that 2+ 2 = 5  if you are told to, and that, of course, freedom is slavery.  Were they all geniuses?]

Language is simply amazing.  It grows like mushrooms after a rain wherever there are people.  Be you an Einstein or Joe Schmoe, your ability to use and play with language is a given, and not at all related to your education and social accomplishments:  Education simply teaches you a specialized use of it.  Language grows up around us just as the younger generation does.  Language pedants are fighting a losing and foolish battle.  As Sancho remarked to Don Quixote,

Once or twice, if I remember correctly, I ‘ve asked your grace not to correct my words if you understand what I mean by them, and when you don’t undertand, to say, ‘ Sancho, you devil, I don’t understand you,’ and if I can’t explain, then you can correct me.

Will I ever tire of citing George Orwell and his book, 1984?  As I like to say, “It’s always 1984 somewhere!”  Right now, it seems like it’s then right here in the USA.  In his book, Orwell has the Party functionaries say that if The Party says the laws of arithmetic are suspended, then 2 + 2 = 5 and that’s it.  Believe it or die!

George Romney told the RNC that we need “a party of big ideas, not Big Brother!”  This from a minion of the party that has implemented domestic surveillance and suspension of habeus corpus.

The Republican flunkeys, one after another, tell us that we should elect their man because “Washington is broken!”  Uh, yeh…YOU’VE been in charge for the last eight years.  No wonder it’s a mess!

Funny also that the bedrock American political culture, even at the RNC, seems to be Democratic:  references to profiles in courage (JFK), the glass ceiling being shattered by Hillary and Geraldine, calls to service (FDR)…etc.

Never Out of Date!