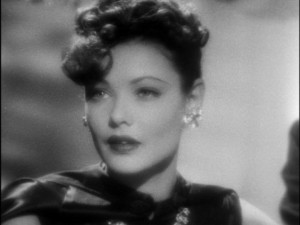 When she first comes to Mother Gin Sling’s casino (yes, that’s her name) she is overjoyed to be there.  She tells her nerdy companion that “Every place you’ve taken me before this was like kindergarten…It has such a delicious evil smell…I thought such a place could only exist in my dreams...”  Just watch the video linked to the top image; it’s all there.

The action is set in a casino that seems like a modern recreation of Dante’s circles of hell.  At the lowest point, there is the roulette well, around which people loose their fortunes, their virtue, and sometimes shoot themselves – usually on Saturday nights.

Poppy sets to gambling, saying she can stop anytime she wants, but she can’t.  It doesn’t take much for her to be sucked into the vortex of gambling, sex, and probably drugs.  Although it will seem tame to audiences used to seeing any sort of sex and violence on screen, the film was heavily censored, and still manages to convey a sense of sadism and utter debauchery as Mother Gin Sling manipulates Poppy for her own ends.  Victor Mature, as “Dr.” Omar, is happy to help out, picking up the sexual favors he craves along the way.

The pace of the film is slow, sometimes excruciating.  There are sequences that seem to go on two or three times as long as they need to.  When two old fogeys try to approach Poppy at the bar, they are shooed away by Omar.  The rotate about one another once, twice, three times before they make off…why?

Poppy plays hard to get…for a minute, and the falls hard for Omar, who has nothing to offer her except sexual charisma.  When she begs him for forgiveness after throwing a drink in his face in fit of jealousy, he enfolds her in his cape, looks both ways, and then dives in for the kiss.  (Kisses are simply lips to lips in this censored cinematic realm.)

Much is often made of Mother Gin’s outrageous hair, but I think it suits her.  She just dares anyone to gasp, “What the hell was she thinking..?”  She’s no-nonsense, and all about power and domination.  Her costumes and hair are part of the game, and it has worked well for her.  When she appears on the stage of her casino floor, the soundtrack swells with orchestral music.

Yes, the dialogue is often absurd, the Chinoiserie is ridiculous, but it reeks of opium and sex.  And I must say, the very ending did surprise me.  Mother Gin Sling is quite a gal.

She makes sure that all of her dinner guests have the dishes they need, and she includes an appetizer for the men – a view of girls in cages being bid for in the street during the New Year celebration.  By the time Polly is ushered into the room, disheveled and sullen, swaying a bit unsteadily in a dress that fits like her skin, we can only guess what she’s been through…

The culture clash between the Chinese and the West has its typical Hollywood silliness – Mother Gin Sling and many other Chinese characters are played by Americans and Brits – but a running gag of the film is the fatuous arrogance of the Westerners towards the ‘natives’ of Shanghai.  At one point, a young, handsome Chinese servant delivers a message in perfect English to a group, and one Brit cackles, “Listen to how these Asiatics attempt to imitate the language!”  No one around him is laughing.

And what about that title?  I didn’t hear a clue about its meaning in the film, except for the red herring of when Mother Gin Sling asks if a certain man used a certain gesture, raising his arm to the ceiling, when she was trying to be certain of his identity.  The movie is based on a play of the same name, and according to this book, it’s a very old phrase of uncertain meaning.  Perhaps it is related to the kookie sequence at the dinner from hell when Dixie, the American floozie who finds work at the casino, hams it up, thumbing her nose with a spoon.  This essay by an academic provides a new twist for the meaning of the phrase, and analyses the use of Chinese themes in noir along the way, but it doesn’t explain its original meaning.

Decades before the French came up with the term of endearment, film noir,  for those dark, melodramatic and fatalistic movies churned out by Hollywood in the forties and fifties, they had already made a classic one!  Jean Gabin plays, Pépé, the man from Marseilles, a smooth, handsome, charming, and rather lighthearted criminal who saves his reserves of brutality for when they are really needed.  For two years, he has been hiding out in the casbah of Algiers, the old city of endless labyrinthine streets, and as long as he doesn’t venture forth into the newer colonial town, the police can never get him.

This is not to say that the cops don’t know where he is, only that it is futile and foolhardy to try and arrest him there.  He is among friends, people who are no friends of the police.  One local inspector is on quite friendly terms with him, joking with him that the date of his arrest is written already (Asiatic kismet) and that he need only wait.  In the image above, Pépé jokes with the policeman, talking to him as if he is a pretty tart who has accosted him on the street.  “What nice mascara you have, dear,” Pépé tells him, and then tweaks his nose while walking away to a romantic rendezvous.

Pépé is tough, but he has a soft spot.  Yes, he is undone by women, although not quite the way you would expect.  I thought I knew the film’s ending, but it surprised me.  He is done in by three women:  Inez, his gypsy lover; Gaby, the gorgeous and gorgeously dressed Parisienne who starts out slumming fashionably in the casbah but falls for Pépé; and Paris, la belle Paris that he misses so much that he smells the metro in Gaby’s perfume.  He is done in by nostalgia for his old haunts – hiding out in the Algiers has become insufferable to him, and he does something desparate, just as the inspector knew he would.

He confesses that he was only pretending to sleep – he was daydreaming of Paris.  That’s what she is to him.  Her perfume, it smells of the the metro! 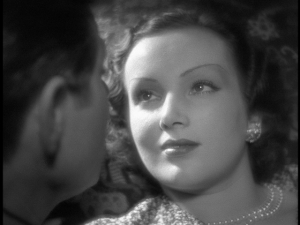 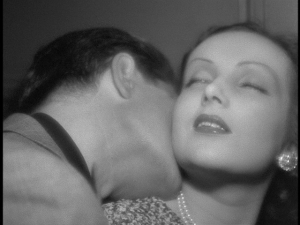 Sometimes, one must be brutal to get the truth, especially from a weasel informer. “That’s the truth!,” he squeals. “Find another truth,” and he keeps on choking him.

Gaby is always dressed to the nines because she is the kept woman of a wealthy businessman.  But she is tired of him, and wants to go to the casbah.  He tells her, “I won’t have you acting like a…” “Like what, exactly?  That’s what I am to you!”  The girl has few illusions.  She throws her jewels on the bed and storms out, but, wait!  “I must be crazy!!”   She retrieves the jewels and then walks out.

A simple lie keeps Gaby from running to him.  She has no choice but to stay with her Monsieur.  Pépé’s lover comes to the fancy hotel to warn him away from the trap that awaits, but the shot of her through the revolving door to the lobby shows the unbridgeable distance between that world and her world, the casbah.  She never gets inside.

He’s caught.  The inspector handcuffs him, but grants him a wish.  He lets him stay to watch the boat sail away with Gaby.  Through the bars – he’s imprisoned already, by his own desires – he can barely make her out on the deck, taking a last look at Algiers.

The shot zooms into her perfectly fashionable face and suit.  She doesn’t see him or hear him over the noise of the engines.  She’s in another world, the world of Paris, already.

Pépé dies.  Killed by a femme fatale?  Victim of his own dreams and longing?  Plaything of society?  The inspector and his lover attend him in a tableau, the sagging pathetic corpse brought low, the bending figures, the vertical lines of judicial and penal order, that brings to mind The Deposition.

This essay from the Criterion edition of the DVD, discusses the tremendous influence of this movie on all subsequent gangster and noir flicks.