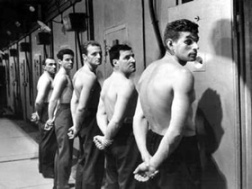 Le Trou, is a film from 1948 about a prison break in Paris. Goodfellas, need I say it?, is a film from 1990 about the mob in NYC.  I watched these two films over the last two days, and it was like visiting two alternate universes.

First, let me say that Le Trou (Jacques Becker) is a fantastic movie.  Spare and incredibly suspenseful, it pulls off the amazing feat of turning the hardened criminals into …not quite the good guys, but exemplars of humanity.  Homo faber, man, the maker, with incredible ingenuity, patience, and perseverance they plan their escape from a fortress in the center of the city.  Loyalty to one another is what makes them go, and betrayal stops them. The film has virtually no music score.

Goodfellas, well…it is based on fact. (In fact, both films are based on accounts of actual events.) The reason I watched the entire flick after seeing bits of it on TV, where it is played endlessly, was because of the part about the biggest heist in American history at JFK, but that is hardly treated in the film. Many say it is realistic, and Scorsesee said he wanted to show what the mob lifestyle was really like, what the violence was really like, cold, brutal, disgusting. Oh well…the millions of young men who love the film probably have a rather different take on Martin’s masterpiece.  They love it. It’s an entertainment, giving away the store by using an endless soundtrack of contemporary music.  How seriously can you take a mob movie that has Hendrix and The Stones rocking out as guys get whacked?

Nothing in Goodfellas compares to the one scene in Le trou in which the two cons peer at a Paris street from a manhole, watch a taxi drive by – freedom! – before going back inside to retrieve their comrades for the big escape.