Another one bites the dust…

This woman’s son was shot by police when they pulled him over  after he allegedly cut them off on a NYC highway.  Everyone in the car, including an off-duty police officer, was unarmed.  The NYPD has offered no explanation for why the officer fired the fatal bullet.

This sort of thing seems to happen a lot in NYC, and the victims are usually black or Hispanic.

The two police trucks forced Mr. Polanco to stop after one truck went in front of the Honda while the second truck maneuvered behind. After the car stopped, along a median of the busy highway, two officers approached the car, a sergeant at the driver’s side and the detective at the passenger’s side where the windows were open, the police said.

Ms. Deferrari later told the police that she had heard the officers order those inside the car to show their hands. In an interview, she said that Mr. Polanco had no time to comply and that, in that instant, the detective, Hassan Hamdy, 39, fired the shot. Ms. Deferrari said she believed the shooting was the result of a case of police road rage.

No weapons were found inside Mr. Polanco’s car, the police said.

Complete newspaper article here.  Does shooting someone like this count as police ‘brutality’ I wonder..?

State of the Police 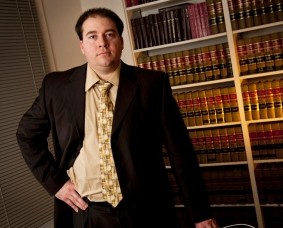 News on the incredible case of Adrian Schoolcraft, who was thrown into a mental hospital for six days to try to cover up his documenting of NYPD abuses.  What with periodic shootings of young black men, subsequently found to be unarmed, and things like this, it’s hard to feel trusting towards New York’s Finest.

He’s not so crazy after all.

An NYPD report supports the claims made by Officer Adrian Schoolcraft, the Brooklyn cop who accused the NYPD of throwing him into a mental hospital because he complained supervisors were cooking the books to make the crime rate seem lower.

The 95-page report was completed in June 2010 but never released. Jon Norinsberg, Schoolcraft’s lawyer, called it “a very strong vindication” of Schoolcraft’s claims.

“It’s unfortunate that this has not been disclosed to the public,” Norinsberg said. “But it will all come out when this goes to trial.”

The police – we love ’em, we hate ’em.  They give us stinkin’ traffic tickets, but they get the bad guys, in the movies.  They beat up protesting hippies, but they beat up striking workers sometimes too.  In Railroaded (1947), we have an ambiguous portrait of police power:  mindless engine of injustice for the weak; saving avengers for the good.

A murderous thug named Duke decides to take his boss for a few grand by knocking off a few of his own gambling joints.  Duke’s an enterprising fellow, and Mr. Big has more money than he knows what to do with.

Meanwhile, Rosie and her family discuss the latest news in town, about how some poor guy got a raw deal from the cops.  Rosie does not like cops!  Her kid brother differs, saying “Maybe some people need a going over!”  Yeah, that’s it.  Beat the truth out them.  That was before Duke carefully frames him for the robbery and incidental murder.  (Elsewhere in noir, not here, the propensity of the officers of the law beat up likely suspects and ignore troublesome details to get a quick conviction  is treated quite graphically.) 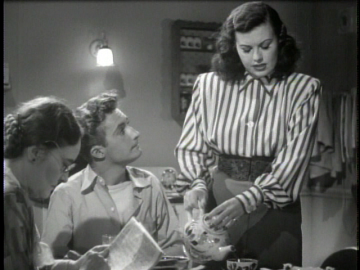 Hugh Beaumont, long before Leave it to Beaver fame, plays the good cop, Mickey, while a suitable partner plays the bad cop.  Mickey is all reason and evidence – his partner is straightforward:  “They all say they’re not guilty.”  Rosie decides to get close to Duke to find out what really happened.  Does she know what she’s getting into, or is she just incredibly dumb?

Along the way, Duke deals with his floozy partner who is too partial to booze.  He can’t count on her keeping her mouth shut. 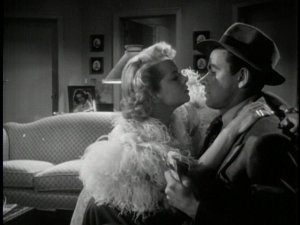 At one point, Rosie confronts the floozy, demanding to know why she’s lying to help frame her kid brother.  A catfight ensues, which Duke enjoys from a hiding place.  Rosie may have family values, but she can get down and dirty too.

Finally, the kid is freed, Duke and his accomplices are all dead, and Mickey gets the girl.  Does she still hate cops?  “Well, I guess you have to make a living somehow.  Yes, I’ve changed my mind!”  Did the system work?  Does this prove that it’s still broken?  Very ambiguous – kid brother was on an express train to the gas chamber, and Mickey was the engineer until he got curious about some details.

Land of the Free Redux

Well, what do you know?  Sometimes a little bit of truth creeps into the pages of our respectable media!  Today’s  column by Charles Blow on arrest rates for marijuana use was an example of truth-by-the-numbers.  It brought to mind an old post of mine on the prison-industrial complex in America, prompted by the graph that is shown above.

Here are a few excerpts from the article:

Attorney General Eric Holder Jr.’s recent chest-thumping against the California ballot initiative that seeks to legalize marijuana underscores how the war on drugs in this country has become a war focused on marijuana, one being waged primarily against minorities and promoted, fueled and financed primarily by Democratic politicians.

According to a report released Friday … “In the last 20 years, California made 850,000 arrests for possession of small amounts of marijuana, and half-a-million arrests in the last 10 years. The people arrested were disproportionately African-Americans and Latinos, overwhelmingly young people, especially men.”

For instance, the report says that the City of Los Angeles “arrested blacks for marijuana possession at seven times the rate of whites.”

This imbalance is not specific to California; it exists across the country.

One could justify this on some level if, in fact, young blacks and Hispanics were using marijuana more than young whites, but that isn’t the case. According to the National Survey on Drug Use and Health, young white people consistently report higher marijuana use than blacks or Hispanics.

How can such a grotesquely race-biased pattern of arrests exist? Professor Levine paints a sordid picture: young police officers are funneled into low-income black and Hispanic neighborhoods where they are encouraged to aggressively stop and frisk young men. And if you look for something, you’ll find it. So they find some of these young people with small amounts of drugs. Then these young people are arrested. The officers will get experience processing arrests and will likely get to file overtime, he says, and the police chiefs will get a measure of productivity from their officers. The young men who were arrested are simply pawns.

…  No one knows all the repercussions of legalizing marijuana, but it is clear that criminalizing it has made it a life-ruining racial weapon. As Ms. Alexander told me, “Our failed war on drugs has done incalculable damage.” 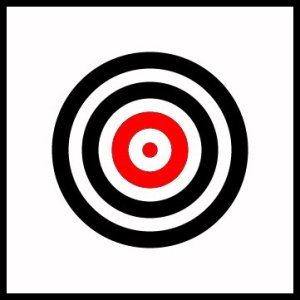 Oops, they did it again.  Mistakes were made.  Another (black) man riddled with bullets on suspicion of carrying a weapon with which to threaten NYPD officers.  Turns out, he had none.  If I were a black man, I’d be afraid to walk the streets of NYC at night…maybe by day too.  If I had a son, I’d fear for him.

Some say, why was Sean Bell hanging out in such a seedy place, a known thug warren?  Shouldn’t he have known better?  [Do we expect to be killed for our poor decisions in entertainment?]  The police were only doing their job – they feared for their lives.  [We pay, and supposedly train them to behave well in such situations.  They behaved like panicked children, and they had the guns.]  The police weren’t murderers!  [Perhaps not, but they certainly didn’t act properly.]

Alas, many claim that there was no racism involved – after all, two of the officers were black or latino.  The fact is, however, that it is only men of color who find themselves at the wrong end of these occassional mistakes.  Why this is so is the real question.  I would lay the blame on the NYPD itself.  The training it gives its men and women before they go out into the community with lethal weapons at the ready is surely abysmal.  One interviewee I heard, an expert on this, said the training is radically contradictory:  If you feel in danger, shoot, vs. Shoot twice, then stop and check.  Not a clear message to take out into the field.  The fact that these incidents continue to happen now and then indicates to me a deeply entrenched attitude of indifference to the consequences of the bad training, the unintended killing of an innocent man of color now and then.

I imagine the mentality goes something like this:  Hey, it’s a jungle out there.  There are a lot of dangerous criminals, and we’re on the front line fighting them.  Yeah, we make mistakes now and then – we don’t want to, we feel bad, but if you want to fight crime, that’s the price.  If you hold us responsible for our mistakes, you’re on your own.  Cut us some slack…