Is the war over? 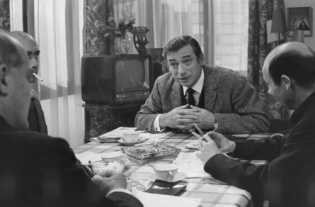 Yves Montand stars in the Alain Resnais film, La guerre est finie, from 1966.  It takes place a year or two before that, and is a portrait of a professional revolutionary who is getting worn out by it all.  Montand is Carlos, or Domingo, or any one of a bunch of different alias, a dedicated communist in the anti-Franco resistance.  He’s been hiding his own Spanish identity for so long, moving back and forth across the border with Spain, that he says he sometimes he forgets himself that he is a Spaniard.

Spain was a fascist state in those days – Franco didn’t die for another ten years or so.  People resisting his rule are killed, imprisoned, and harassed. Meanwhile, millions of Europeans and Americans see Spain as the perfect summer vacation spot.  Carlos is wondering if times have changed so much that the old strategies need an update.

Unfortunately, being a member of a communist underground means he has to discuss, theorize, and justify everything in terms of the approved catechism of The Party.  In the image above, he is learning that his controlling committee no longer trusts his judgement: how could he doubt that organizing, yet again, for a general strike is the correct strategy?  He has been in Madrid too long, too close to the day to day struggles.  He has lost site of the bigger picture, the true state of ‘historical conditions.’  He needs a rest for six months, or longer.  Time to reacquaint himself with the timeless truths of Lenin and The Party.  Of course, when the man picked to replace him in Madrid has a heart attack, Carlos is suddenly suitable for work ‘on the ground’ and is told to return immediately.

While all this is going on, Carlos meets Nadine, a young student who with quick thinking, gets him out of a fix with the authorities.  She’s in the anti-Franco movement too, and she involves him in a meeting with her committee.  They are all very young, and they are scornful of the fuddy-duddy Marxists in Carlos’ group who continually use the same old tactics.  He has to admit, they have a point – exactly his criticisms.  But what do they plan to do?  Detonate plastic explosives in a terrorist action to disrupt tourism in Spain.  Carlos walks out in disgust.

What’s a thinking man to do?  He follows orders, and returns to Spain, but Nadine finds out at the last minute that he will be trapped.  The committee taps Carlos’ lover to rush to Spain to try to head him off and warn him.  The film ends without us knowing if she succeeds.  Seems either way, the war is over for him.

Resnais uses his signature editing techniques to disrupt the viewers normal sense of narrative.  It effectively raises the level of suspense while allowing us to follow Carlos’ plight with intense interest. 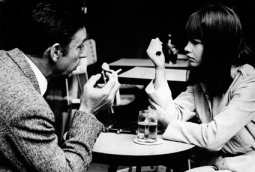