Instinct and the Power-Elite

Mr. Lhota said that Mr. de Blasio’s “knee-jerk response to any new program is to raise taxes,” an approach he said was “instinctively wrong.” Instead, Mr. Lhota said the mayor should look to find efficiencies in the city’s budget.

Ah…you can’t make this stuff up.  A “knee-jerk” response to increase revenue is bad, but cutting the budget is obviously good, especially since he and his friends will not even feel it.  But how does he know this for a fact?  Raising taxes is “instinctively wrong.”  Might we say that Mr. Lhota has a knee-jerk response to tax hikes on the wealthy?  Sure seems like it.  It’s just pure instinct.

Of course, Mr. Lhota’s response to increased taxes for the wealthy may be instinct only among his social circle, so it is probably a learned response, with no instinct involved at all, but it sure seems like a reflex!

The article also includes this:

He mounted a direct attack on Mr. de Blasio’s “tale of two cities” campaign theme, saying that Mr. de Blasio was trying to “separate classes” as a political strategy.

“Calling it a tale of two cities, that level of invective has no place in any campaign, at all,” Mr. Lhota said. “It divides people. What we really need to do is to work together and provide a solution, not separating people and then saying that the ends justify the means.”

I would like to know what level of invective is appropriate in a campaign according to Mr. Lhota?  Tale of two cities seems rather tame to me.   By all means, let’s work together to raise taxes on Mr. Lhota.

Augustine: Lost in the clouds 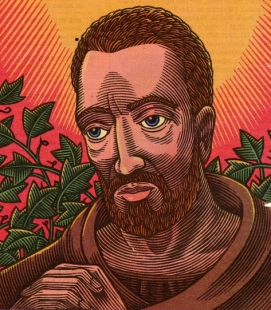 After devoting hundreds of pages to a sharply worded, often funny, and always derisive deconstruction of the folly of Roman paganism, St. Augustine finally turns his attention to more positive topics, e.g., the superiority of Platonism as the one pagan philosophy that is closest to the true religion of Christianity.  What strikes me most is the way in which thinkers of his day, and ours, are bewitched by their own polished use of language.  So many chasms of unexplained propositions are glided over so lightly.

From Book VIII, Chapter 6 of The City of God:

As for the teaching which is comprised in [what] Platonists call logic, or rational philosophy, heaven forbid that I should think to compare them with those who have placed the criterion of truth in the bodily senses and have decided that all that belongs to the realm of learning is to be measured by such unreliable and misleading standards.

In other words, abstract thought gives knowledge; observation yields error.  Here we have the Christian imprimatur placed on a Greek concept that will inhibit the growth of science for another thousand years.  As I remarked on my post about Playfair, the great innovator in representing quantitative data with graphs, this prejudice against the evidence of the eyes lingered on into the scientific age.

Here I always wonder what bodily senses they use to see what beauty which they say is found only in the wise. With what physical eyes have they beheld the beauty and grace of wisdom?

A marvelous example of rhetorical skill tripping up the search for truth.  He fixes on a metaphor, takes it as concrete, and then teases out the contradictions that ensue, using it as evidence for his spiritualist point of view.

They saw also that in every mutable being, the form which determines its being, its mode of being and its nature, can only come from him who truly is, because he exists immutably.

This lapidary phrase is almost like a chant, a mantra.  Often, in this chapter, Augustine uses rhythm and apparently simple logic to build to towards a triumphant declaration of the obvious truth of his religion.  He continues with this evocation of the entire panorama of existence: It follows that the whole material universe, its shapes, qualities, its ordered motions, its elements disposed throughout its whole extent, stretching from heaven to earth, together with all the bodies contained within them; and all life, whether that which merely nourishes and maintains existence, as in the trees, or that which has sensibility as well, as in the animals; or that which has all this, and intelligence besides, as in human beings; or that life which needs no support in the way of nourishment, but maintains existence, and has feeling and intelligence, as in the case of angels – all these alike could come into being only through  him who simply is.

For a wonderful introduction to The City of God, see this text.