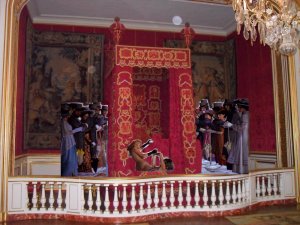 Life in the 17th century royal courts was a highly regimented affair.  The ruling class had a lot of rules to play by!  No, not a free and easy existence.

Here’s a snippet from the memoirs of Saint-Simon about the marriage night of Phillip V of Spain, Louis XIV’s grandson.  He left France to take the Spanish throne, precipitating the lengthy Wars of the Spanish Succession – Blenheim being a glorious victory for Louis’ opponents, led by Winston Churchill’s ancestor – and searched about for a bride.  He was about 18 – he found a suitable Savoyard duchess.  She was 13.  I have added some italics.

After a long and disagreeable supper, the King and Queen withdrew. Then feelings which had been kept in during supper overflowed. The Queen wept for her Piedmontese women. Like a child, as she was, she thought herself lost in the hands of ladies so insolent; and when it was time to go to bed, she said flatly that she would not go, and that she wished to return home. Everything was done to console her; but the astonishment and embarrassment were great indeed when it was found that all was of no avail. The King had undressed, and was awaiting her. Madame des Ursins was at length obliged to go and tell him the resolution the Queen had taken. He was piqued and annoyed. He had until that time lived with the completest regularity; which had contributed to make him find the Princess more to his taste than he might otherwise have done. He was therefore affected by her ‘fantaisie’, and by the same reason easily persuaded that she would not keep to it beyond the first night. They did not see each other therefore until the morrow, and after they were dressed. It was lucky that by the Spanish custom no one was permitted to be present when the newly-married pair went to bed; or this affair, which went no further than the young couple, Madame des Ursins, and one or two domestics, might have made a very unpleasant noise.  [Unlike the French custom, which was to have witnesses present in the room as the newlyweds ‘enjoyed’ their first sexual intimacy, and the consummation of their marriage.  After all, the father of the heir must not be in doubt!]

Madame des Ursins consulted with two of the courtiers, as to the best measures to be adopted with a child who showed so much force and resolution. The night was passed in exhortations and in promises upon what had occurred at the supper; and the Queen consented at last to remain Queen. The Duke of Medina-Sidonia and Count San Estevan were consulted on the morrow. They were of opinion that in his turn the King, in order to mortify her and reduce her to terms, should not visit the Queen on the following night. This opinion was acted upon. The King and Queen did not see each other in private that day. In the evening the Queen was very sorry. Her pride and her little vanity were wounded; perhaps also she had found the King to her taste.

The ladies and the grand seigneurs who had attended at the supper were lectured for what had occurred there. Excuses, promises, demands for pardon, followed; all was put right; the third day was tranquil, and the third night still more agreeable to the young people. On the fourth day they went to Barcelona, where only fetes and pleasures awaited them. Soon after they set out for Madrid.

Around the corner from the entrance to my office is the Century 21 Department Store, certainly one of the most popular tourist destinations in New York after the World Trade Center site –  with the slogan “Fashion worth fighting for! ”  I go there regularly on my lunch hour to consume and keep myself in high-quality slacks, shoes, and haberdashery without breaking my bank.

The image of frenzied women clawing over tempting fabrics and clothes is at the center of Zola’s novel, Ladies Delight (Au Bonheur des Dames), the story of a hugely successful department store c. 1880, and an amazing novel in many ways.  It is a tale of the swaddling days of consumerism, commodity fetishism, commodification – the whole array of cultural-crit jargon.  Here it is, laid out:  advertisement, loss leaders, seductive product displays, free giveaways, ominbuses with huge posters, mega-sales, fads-fashion-and novelty; the economics of price wars, driving the small shops on “main street” under the wheels of the big malls, and on and on.  It’s so familiar, you wonder if there ever was a world without shopping centers!

Mouret is the dynamic, handsome, hedonistic, creative volcano at the center of the huge machine that is his department store, the shop, as the employees call it.  He has his pick of the sales girls – any would give themselves to him for the thrill of it and the money he’ll throw their way – and a society mistress as well.  He is a font of new ideas for selling, marketing, creating desire, creating need, creating new products, new sensations!  The daily takings climb steadily towards the landmark figure of 1,000,000 francs!

The sales workers are a frenzied competitive lot – backbiting and driven.  This job is their chance to make something for themselves, perhaps of themselves.  They are dismissed en masse at a dip in weekly sales, and many come from lives of unrelenting urban or rural poverty.  The feminine protaganist arrives this way, and the trials of her incredibly difficult life during her early days in Paris are related in detail.  Then she “goes over to the other side,” as her uncle, the doomed proprietor of an old fashioned fabric shop calls it, and she goes to work for the infernal machine.

Many women in Zola’s novels are the equal of their male counterpart, and this novel relates a long duel of hearts between Mouret and Denise.  She is proud, quiet, her personality is based on a rock-solid and austere self-respect.  She withstands poverty, the gossipy and vile sniping of her fellow sales girls, and exhaustion to rise within the sales staff hierarchy.  Gradually she wins them over, and Mouret, noticing her excellent good sense and employing her ideas, begins to fall for her.  She worships him, adores him, and everyone assumes he’s already bedded her, but she maintains her “virtue.”  She does this not out of sentimental notions of what a good girl is, but because she fears that to give herself to him would end up with her being cast off when he tires of her, leaving her emotionally ruined and desolate.  She is right.

Mouret, for his part, a man who built his life on women, on controlling with cold calculation their whims and desires, on exploiting them for their money and their erotic attributes, on taking an Olympian and disdaining view of them, that sorry herd of females who jam his shop and make him rich – Mouret feels himself suffering the revenge of Woman.  The Eternal Feminine is breaking him.  Denise will not yield, no matter how much money he offers, no matter what he offers!  In the end, he submits, he begs her to marry him.  She accepts, realizing that their duel has humanized him.  He realizes he cannot buy love, and it is love he wants.  Male and female are reconciled.

The book is filled with detailed discussions of how the shop works, how accounts are kept, how the machine of consumption is kept on its well-oiled track.  It also has endless discussions of textiles that are utterly bewildering to me – I don’t know what most of them even look like.   In a nice twist, the final drama before Denise accepts Mouret involves a store detective catching an arrogant society lady stealing lace and gloves.  All are slaves to the machine, rich and poor.

The silk department was like a great room dedicated to love, hung with white by the whim of a woman in love who, snowy in her nudity, wished to compete in whiteness.  All the milky pallors of an adored body were assembled there, from the velvet of the hips to the fine silk of the thighs and the shining satin of the breasts.

In the silk department there was also a crowd, the principal crush being opposite the inside display, arranged by Hutin, and to which Mouret had given the finishing touches. It was at the further end of the hall, around one of the small wroughtiron columns which supported the glass roof, a veritable torrent of stuffs, a puffy sheet falling from above and spreading out down to the floor. At first stood out the light satins and tender silks, the satins a la Seine and Renaissance, with the pearly tones of spring water; light silks, transparent as crystals— Nile-green, Indian-azure, May-rose, and Danube-blue. Then came the stronger fabrics: marvellous satins, duchess silks, warm tints, rolling in great waves; and right at the bottom, as in a fountain-basin, reposed the heavy stuffs, the figured silks, the damasks, brocades, and lovely silvered silks in the midst of a deep bed of velvet of every sort—black, white, and coloured—skilfully disposed on silk and satin grounds, hollowing out with their medley of colours a still lake in which the reflex of the sky seemed to be dancing. The women, pale with desire, bent over as if to look at themselves. And before this falling cataract they all remained standing, with the secret fear of being carried away by the irruption of such luxury, and with the irresistible desire to jump in amidst it and be lost.

In the lace department the crush was increasing every minute. The great show of white was there triumphing in its most delicate and dearest whiteness. It was an acute temptation, a mad desire, which bewildered all the women.  The department had been turned into a white temple, tulles and Maltese lace, falling from above, formed a white sky, one of those cloudy veils which pales the morning sun. Round the columns descended flounces of Malines and Valenciennes, white dancers’ skirts, unfolding in a snowy shiver down to the ground. Then on all sides, on every counter, was a stream of white Spanish blonde as light as air, Brussels with its large flowers on a delicate mesh, hand-made point, and Venice point with heavier designs, Alen9on point, and Bruges of royal and almost religious richness. It seemed that the god of dress had there set up his white tabernacle.